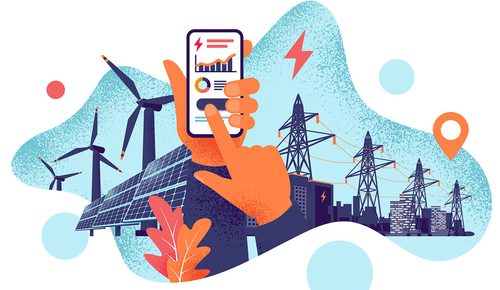 During the COVID-19 pandemic people across the world have adopted increasingly digital lifestyles. They stream movies, attend Zoom meetings, and sweat through online exercise classes. Many of them, however, are unlikely to consider the environmental impact of this behavior.

A new Yale-led study accounts for the hidden environmental footprint of this surge in digital activity, estimating its carbon emissions, water consumption, and land usage.

Published in the journal Resources, Conservation, and Recycling, the study estimates that internet usage increased by up to 40% worldwide following the issuance of stay-at-home orders from January through March 2020 as the virus spread. According to the study, this spike in online activity triggered a demand for up to 42.6 million megawatts per hour of additional electricity to support data transmission and to power data centers — the buildings that house the hardware and data of computer networks, cloud services, and digital applications.

If the world is to transition to a green economy, the authors assert, then these often-overlooked environmental costs must be fully exposed and addressed.

“The pandemic-related switch to digital has important environmental benefits, such as the reduction of travel-related carbon emissions, but the transition to a more digitally-centered world is not as clean as one might think,” said Kaveh Madani, the Henry Hart Rice Senior Fellow at the Council on Middle East Studies at Yale’s MacMillan Center for International and Area Studies, who led the study. “We want to provide people with the information they need to make good choices, so they don’t develop habits that harm the environment and are difficult to break.”

The other collaborators are from Purdue University and MIT.

If remote working and other physical distancing requirements were to continue through 2021, an additional 34.3 million tons in emissions of carbon dioxide and other greenhouse gases would be generated worldwide, the study forecasts. To offset that would require a forest twice the size of Portugal, the study says. The amount of water consumed would fill 317,200 Olympic-size swimming pools. (Water is used in the generation of electricity and to cool servers and other hardware.) And the land footprint, which includes the area needed to produce the required energy for data processing and transmission, would be the equivalent of the city of Los Angeles.

These rough estimates are based on data reported by individual countries and specific service providers. For example, Netflix reported a 16% spike in daily traffic between January and March 2020. Zoom, the nearly ubiquitous digital meeting platform, reported a tripling of daily usage after initial pandemic-related shutdowns in the United States.

The study recognizes that the changes in internet use do not cause linear changes in energy use and environmental footprints. Yet, the researchers say they hope that their estimates — based on limited available data at the global scale — will encourage researchers, internet users, regulators, and service providers to more carefully examine the overlooked environmental impacts of the internet sector.

Madani and his coauthors urge service providers, including firms that provide cloud-based storage services, and application-based companies — such as YouTube, Zoom, Instagram, Facebook, Twitter, Microsoft, Amazon, TikTok, and Netflix — to continue taking steps to improve efficiency and reduce their energy. But they also call on them to work toward limiting the environmental impact of their products and to share information about their environmental footprints with users.

In addition, they urge policymakers to require digital companies to be transparent about the environmental footprints of their products and enact measures to curb their environmental impact.

There is also role for consumers, who can collectively reduce the internet’s environmental footprint and promote sustainability by adopting responsible online behaviors, the researchers said. For example, whenever possible, consumers can lower the quality of streaming video quality from high definition to standard. If 70 million streaming subscribers lowered the quality of their video, it could reduce monthly greenhouse gas emissions by up to 3.5 million tons — the equivalent of eliminating 6% of monthly coal consumption in the United States, according to the study.

“It’s about developing responsible behaviors, like switching off the lights in an empty room,” Madani said. “That’s the spirit of our message. Digital products are constantly improving in quality, but we have power over how we use them. Perhaps you don’t need to stream every movie in HD. Perhaps consider switching off the video function during a Zoom meeting when possible. Each of these behaviors can have a big impact collectively.”