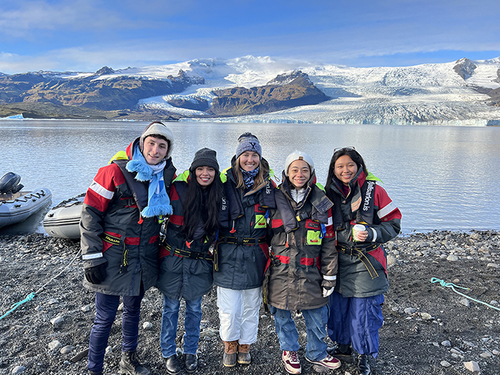 “What could possibly be urban about Iceland?” The question that Urban Studies major Nina Grigg ’24 encounters when she tells people about her field study trip is exactly the question that she and her fellow students set out to answer when they traveled there last fall.

In October 2022, while enrolled in Assistant Professor Joyce Hsiang’s course “Urban Lab: An Urban World”, Grigg was one of five undergraduates who accompanied the Yale School of Architecture professor on an intense five-day trip to Iceland to visit the sites and study the issues that Hsiang is investigating in her research.

Hsiang’s research project “Sites Unknown: An Atlas of Architecture & Urbanization in the Anthropocene,” which is funded by the MacMillan Center for International and Area Studies at Yale, explores how even the most remote places—from the South Pole to the North Pole, the depths of the ocean floor to outer space—are in fact urban, mapping out how a series of seemingly un-urban sites are inextricably linked to global systems and urban life.

During Fall Recess, Hsiang explained, she and the students sought to discover “how humans relate and adapt to our changing environment, with visits to the profound landscapes of melting glaciers, renewable energy, and once thriving port towns.” (The students’ travel was supported through a School of Architecture fund.)

The group traveled the entire ring road around the island—almost 1,000 scenic miles—stopping at many turf houses, greenhouses, community pools, power plants, lava fields, and glacier lagoons. They also met with Icelanders grappling with the local effects of global human impact, including the founder of a vertical farm on the outskirts of Reykjavik and the former Mayor and Culture Minister of a herring town that has become a cruise ship terminal.

Grigg described the trip as transformative for the whole group. Their trip to Stjornarfoss waterfall, which she describes as “a quintessentially Icelandic landscape of a cascading waterfall flanked by two volcanic hills covered in ancient moss,” epitomized the answer to their question for this Urban Studies student.

“One might think this landscape is some serene vision of nature,” she said, “However, everything in this picture is urban, shaped by the Anthropocene human.” The hills are bare “only because Vikings deforested the previously-lush island in 850, forcing Icelanders to build their houses out of turf.” The waterfall flows between those hills “only because climate change-induced glacial melt rerouted rivers to form it.” (Nearby, Iceland’s longest bridge, which was built in the 1970s over a glacial river, now stands over dry land.)

“In the era of the Anthropocene, ‘natural space’ as we typically conceive it no longer exists,” Grigg concluded, “Everything is part of the urban mesh.”

This revelation will inform Grigg’s further studies. For her senior thesis, Grigg plans to focus on the possibilities of urban society in a more desolate landscape: the moon. She explained, “In my research, I hope to open up a conversation about the place that the moon already is as we consider the cities we might be building on it in the not-too-distant future.”

Hsiang, who seeks to raise awareness about our connected urban existence and impact on the planet through this and other related projects, sees the success of “Sites Unknown” as twofold. She explained, “My research through the support of the Macmillan Center was not just beneficial for me, but extended into the classroom, providing the foundation for this educational experience which students have described as transformative and life-changing.”