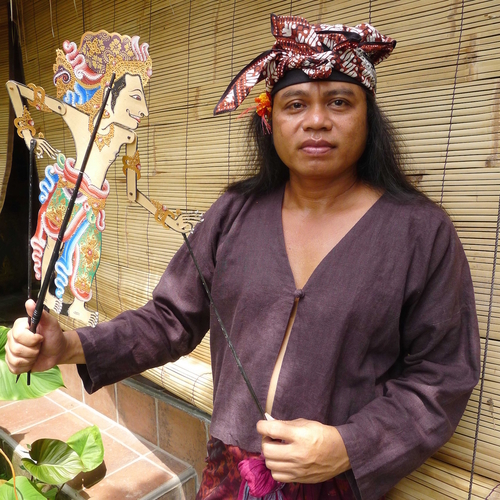 A supplemental reading packet, with translation and transcription of the dialogue, is here. Viewers are encouraged to read through this during the 15 minute instrumental overture.

Wayang (“shadow”) Kulit (“skin”) are flat leather puppets made from carved and painted rawhide. The shadow play tradition, as it is performed on the islands of Java and Bali in Indonesia, is at least 1000 years old and has historical connections to forms known in India. For this performance I Gusti Putu Sudarta will perform the tale of Sutasoma, a prince and reincarnation of the Buddha in human form.  Wayang Kulit is a sacred genre, often performed for special ceremonies in the inner courtyards of Balinese temples. However, it is also mass entertainment for local communities and besides philosophical and religious instruction, performances include a healthy dose of bawdy humor and manic fight scenes.

In Indonesian wayang kulit performances a single puppeteer, the dalang, sits behind a large rectangular screen, using a fire (in our case, a projector) to project the outlines of flat carved leather puppets onto the screen. This performance will be presented in a mixture of English, Indonesian, Balinese and the ancient Kawi liturgical language.
(-A. McGraw)

Gamelan gender wayang is a Balinese variant of Gamelan. As its origins are thought to be as far back as the 10th century, it is one of the most ancient forms of gamelan on the island.  A gamelan gender wayang group usually consists of either two or four players, making it the smallest amount of players needed for a gamelan performance.

The instruments consist of two/four metallophones (gender) that are made out of ten bronze keys with suspended bamboo tube resonators connected to them.  Gamelan gender wayang’s sound is described as soft, calm and meditative (in this state described as ngisep), but can increase in intensity and dynamics during wayang’s scenes of action (in this state described as ngumbang). The sound also has a shimmering quality thanks to the playing of the two slightly differently tuned instruments in unison which is seen as the ideal way of playing. Due to so many factors that can vary during playing, gamelan gender wayang is widely described as a very complex style that can take years to fully master.  (-Rym database)

Gusti Sudarta, a renowned musician, composer, dancer and shadow master from the village of Bedulu in Bali, Indonesia, is currently Associate Professor of Theater, Indonesian Institute of the Arts, Denpasar, Bali. He has toured internationally since the mid 1980s, performing both traditional and experimental music, dance, and theater.

Performance sponsored by the Council on Southeast Asia Studies and hosted by Maho Ishiguro, Lecturer, Yale Department of Music, and Director of the Yale Gamelan Suprabanggo.

The performance was originally scheduled for Saturday, March 28,  7:30 - 9:00 PM at Yale University.