Westenley Alcenat on “Children of Africa, Shall be Haytians: Prince Saunders, Revolutionary Transnationalism & the Origins of Black Emigration” 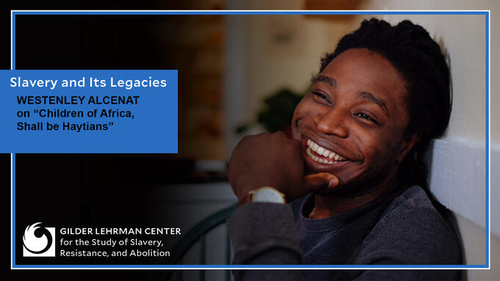 Thomas Thurston, Education Director at the Gilder Lehrman Center for the Study of Slavery, Resistance, and Abolition, talks with Westenley Alcenat on his book project “Children of Africa, Shall be Haytians: Prince Saunders, Revolutionary Transnationalism & the Origins of Black Emigration.”  Listen to the podcast

Westenley Alcenat is a scholar, teacher, and academic consultant. His primary focus is the African American protest tradition, political and intellectual thought in the nineteenth century, and the Haitian Revolution’s legacy and influence on Black American radicalism. He teaches United States, Atlantic, and Afro-Caribbean history at Fordham University in the Bronx.

“Slavery and Its Legacies” is a podcast series produced by the Gilder Lehrman Center for the Study of Slavery, Resistance, and Abolition at the MacMillan Center. It features visiting scholars, activists, and others about their contributions to the understanding of slavery past and present and its ongoing role in the development of the modern world. New episodes will be available every other Monday. This podcast series is made possible through a grant from the Robina Foundation, with the assistance of the Yale Broadcast Center. You can email comments and suggestions to gilder.lehrman.center@yale.edu with subject line “podcast”. “Slavery and Its Legacies” is available on iTunes and SoundCloud