Who Counts in Conflicts During the Pandemic? 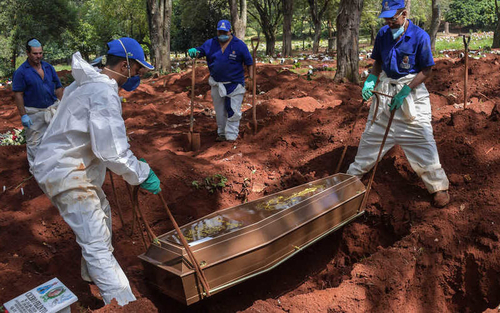 Sophia Dawkins, a Ph.D. candidate in political science, wrote the following commentary that appeared in Political Violence At A Glance on January 5.

When the WHO declared a pandemic last March, UN Secretary-General António Guterres appealed for a global ceasefire. That now feels like a distant memory. Few ceasefires have materialized. The pandemic has exacerbated fragility in many conflict contexts, worsening humanitarian crises. Meanwhile, analysts speculate about who is dying in these settings. Many public officials, health professionals, and journalists believe they are undercounting the dead, from COVID-19 and from violence. Others are more optimistic. Who is right?

Not knowing who has died in conflicts is bad for the living and the dead, especially during a pandemic. Fatality data are essential for effective humanitarian and public health interventions. Death counts help citizens hold regimes to account, and establish a record for advocacy, criminal proceedings, and transitional justice. These processes have renewed urgency in places where authoritarians have embraced lockdowns to escalate human rights abuses and target opponents.

Death counts are also central to conflict research. Datasets based on newswire reports about fatalities are important engines for this scholarship. As I have found, the value of these data hinges on understanding information black holes, but the pandemic has robbed researchers of that ability. Travel restrictions and local lockdowns limit on-the-ground reporting on crises from Syria to South Sudan. The quality of evidence feeding datasets like UCDP-GED and ACLED has plummeted. This would be less problematic if researchers could make reasonable guesses about the influence of the pandemic in places where information is scarce. But COVID-19 is a complex emergency with uneven effects and reasonable guessing is no longer practical.

There are at least three reasons why mortality numbers coming out of conflict zones during the pandemic are likely just the tip of the iceberg.

First, public health institutions may be undercounting the COVID-19 dead. Syria’s union of doctors has described in harrowing detail the practical and political reasons why testing is limited. Yet, conflict makes populations more vulnerable to death from COVID-19 than in peacetime. Some physicians have declared a “syndemic”—a situation wherein social inequalities, which wars exacerbate, worsen non-communicable diseases, which interact with the virus to make it more deadly.

Secondly, the pandemic may be causing excess deaths from poverty. The problem for many is not COVID-19 but “COVID-20”—hunger during lockdown—which the South Sudanese describe as more deadly than the virus. Starvation requires political decisions about who receives relief and who is left behind, as Ugandans in the informal economy have found. Conflict politics makes these deaths more likely and more difficult to monitor.

Thirdly, the pandemic may be aggravating violence. Foreign policy analysts have speculated about the potential for the virus to create power vacuums by killing elites. Politicians have suffered (here, here, here and here) but no head of state has died so far, with the possible exception of Burundi’s late president, Pierre Nkurunziza. Instead, the pandemic has fed instability by exacerbating conflict fault lines and rolling back international monitoring mechanisms that survey ceasefires and human rights abuses. According to the Political Settlements Research Program, these trends have undermined peace processes. Conflict diplomacy often flounders over Zoom. This has created conditions in places like South Sudan and Libya for violence to surge and peace agreement implementation to stall.

Could fears of undercounting the dead be overblown? African statisticians have shown that modeling at the beginning of the pandemic over-estimated the COVID-19 dead in many fragile contexts. While citizens in places like Somalia, Ethiopia, and South Sudan have experienced extreme economic stresses, high infection rates appear not to have brought high fatalities—though new strains of the coronavirus risk changing that. The Kenyan experience is illuminating: by the end of July, test data suggested that 34 to 41 percent of residents in dense urban areas had been infected, with just over 600 dead. The reasons for this remain unclear, but may include the low median age of populations.

Violent deaths may also be declining in places. Shutdowns can freeze unrest. Zoom diplomacy works for some. In August, Sudan’s transitional government struck a landmark peace deal with an alliance of armed groups. The agreement has limits, but shows how negotiations can progress in pandemics. In ungoverned spaces, non-state armed groups have stepped in to provide services. This has a dark side: service provision in places like Colombia forms part of the brutal repertoires armed groups use to control populations and recruit children. Thus, non-lethal violence replaces lethal violence. This substitution may be temporary, as gangs enter new conflicts due to the pandemic’s disruption of drug distribution routes.

What can be done

Uncertainty about who has died in conflicts during the pandemic is far from inevitable. Policymakers can do two things. First, human rights and media organizations can learn from remote management models that humanitarian agencies like Médecins Sans Frontières developed in contexts like Somalia. These allow investigators to maintain eyes and ears on the ground in conflicts while adhering to movement restrictions. Secondly, organizations can start to pre-position themselves to conduct household surveys as soon as public health risks ease. This will allow retrospective construction of a fatality picture.

Likewise, scholars can do two things. Rather than accumulate event data, researchers can focus on information about individuals. By gathering lists from hospitals, mortuaries, and humanitarian assessments, scholars can use techniques like Multiple Systems Estimation to locate the missing dead. Researchers can also take the simple step of contextualizing their estimates.

Policymakers and scholars owe it to people living in conflict to understand who has perished during the pandemic. It is essential for public health. It is central to advancing knowledge. And it is the humane thing to do. With good social science, we can count and we can save lives.

Sophia Dawkins researches how peace processes shape political violence in civil wars, with a focus on South Sudan and the Horn of Africa. Sophia has been engaged with Sudan and South Sudan since 2010, when she deployed as an humanitarian worker in the contested Abyei Area. She then worked for four years in peace mediation and humanitarian negotiations with Conflict Dynamics International. Sophia has conducted projects for the World Bank, African Union, Carnegie Corporation, US State Department, Mercy Corps and World Peace Foundation. She has published on peace processes in diverse outlets, including the Washington Post and peer-reviewed Journal of Peace Research and European Journal of International Law. Sophia is recipient of the International Studies Association’s 2018 Finkelstein Prize for best graduate student paper in international organization, and was a 2019-2020 US Institute of Peace Jennings Randolph Peace Scholar.