Why the build-up of Russian forces on the Ukraine border? 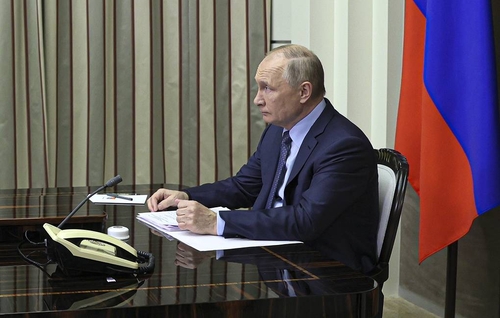 On Tuesday, U.S. President Joseph Biden and Russian President Vladimir Putin spoke for two hours by video conference—Biden in the White House Situation Room, Putin in his palatial residence in Sochi overlooking the Black Sea—about the build-up of Russian forces near Ukraine, Putin explaining the rationale and Biden warning about the possible consequences of their use.

Last spring, as the U.S. and its NATO allies began their large-scale DEFENDER-Europe 21 joint exercise, Russia moved roughly 100,000 troops plus equipment to territory immediately adjacent to eastern Ukraine, a substantial portion of which has been controlled since 2014 by pro-Russian separatists. After the DEFENDER-Europe 21 exercise concluded, most of the Russian troops were withdrawn. But much of their equipment was left in place—in effect, forward-positioned for possible future use. In September, Russia and Belarus began Zapad-2021, a large-scale joint military exercise that takes place every four years and that, according to the Russian ministry of defense, this year involved 200,000 Russian troops plus tanks and other armored equipment. After the exercise concluded, a significant number of the Russian troops were deployed in territory to the north and east of Ukraine as well as in Crimea, annexed by Russia in 2014. The Ukrainian government has estimated that more than 100,000 troops, of which more than 90,000 are ground troops, have been re-deployed to Russian territory adjacent to northern and eastern Ukraine and to Crimea.

Why so many Russian troops have been positioned in territory immediately adjacent to Ukraine has been the subject of considerable speculation. Some think that, after seven years, Russia is tired of the inconclusive “frozen conflict” in eastern Ukraine and wants to settle it by sending in additional troops to secure the portions of Luhansk and Donetsk regions that are now tenuously held by the pro-Russian separatists. Others think Russia wants to make it clear that it won’t abandon the pro-Russian separatists and allow Ukraine to regain control of those regions without first implementing the reforms agreed at Minsk in 2015, including the provision of substantial constitutional autonomy for those regions. Still others think Russia, alarmed by the military assistance the U.S. and other NATO countries have provided Ukraine as well as recent NATO activity in the Black Sea, fears that Ukraine, possibly with NATO support, may move militarily against the pro-Russia separatists who control substantial portions of eastern Ukraine. And some think, in light of Russia’s recent deployment of troops to Crimea, which, after its annexation, is of course an integral part of the Russian Federation, that it fears that Ukraine, possibly with NATO support, might even attempt to retake some or all of Crimea, and perhaps damage or otherwise incapacitate Russia’s large naval base at Sevastopol. After all, Ukraine hosted Sea Breeze, a multinational naval exercise in the Black Sea this summer that included a NATO fleet, and after Sea Breeze, NATO conducted Breeze 2021, its annual naval exercise in the Black Sea.

As plausible as some if not all of those possible explanations may be, there is a simpler explanation for the build-up. It is one that Putin discussed in considerable detail in his long article entitled “On the Historical Unity of Russians and Ukrainians” published in July, his speech on November 18 at the expanded meeting of the Foreign Ministry Board, his comments at an investment forum in Moscow November 30 and a Kremlin ceremony for newly-appointed foreign ambassadors on December 1, and in his comments to the press the day after the call: The message in all of them is simple and entirely unambiguous: Russia will not accept Ukraine becoming a member of NATO. The issue is not about eastern Ukraine; it is about Russian security.

Ukraine has a long history of discussion with NATO that eventually evolved into discussions over possible membership. Soon after its independence in 1991, it joined the North Atlantic Cooperation Council and then in 1994 the Partnership for Peace program. In 1997, it signed the  Charter on a Distinctive Partnership which established the NATO-Ukraine Commission to increase cooperation. In 2002, the Commission adopted a Ukraine-NATO Action Plan. And then, after the Orange Revolution of 2004 that brought President Viktor Yushchenko, in early 2008 the government proposed that Ukraine join NATO’s Membership Action Plan (MAP) and asked NATO to consider the proposal at its April 2008 Summit in Bucharest. At the meeting, NATO decided not begin an MAP but the Secretary-General said that both Ukraine and Georgia would eventually join, and in December 2008 NATO decided it would prepare an Annual National Programme for Ukraine to assist it in implementing the reforms needed in join without referring to an MAP, and the 2009 Declaration to Complement the 1997 Charter directed the Commission created by the Charter to move forward the reforms aimed at implementing Ukraine’s aspirations for membership.

The election of President Viktor Yanukovych in 2010 reversed Ukraine’s progress in the long preparatory process that might eventually result in membership. Yanukovych, from eastern Ukraine and closely tied to Putin, said the current level of cooperation with NATO was sufficient and that accession was unnecessary. And to ensure that it wouldn’t happen, legislation was enacted that excluded the goal of integration into Euro-Atlantic security arrangements in general and NATO membership specifically. Yanukovych, of course, fled in the midst of the Maidan uprising in February 2014 and was removed from office and Petro Poroshenko was elected president. Several months later, Prime Minister Arsenii Yatseniuk announced he would ask the parliament to put Ukraine on a path to NATO membership. After the October 2014 election, the parliament renounced Ukraine’s non-aligned status and endorsed greater cooperation with NATO in order to meet the criteria for membership. At the 2016 NATO summit in Warsaw, NATO established a Comprehensive Assistance Package for Ukraine and in 2017, the parliament  passed legislation reinstating membership in NATO as a foreign policy priority and Poroshenko announced he was opening negotiations with NATO on a new Membership Action Plan. In March 2018, NATO added Ukraine to the list of aspiring members (along with Bosnia and Georgia); in September 2018, the constitution was amended to make accession to the EU and NATO the main objectives of Ukraine’s foreign policy; and in February 2019, the constitution was amended to enable Ukraine to join the EU and NATO. In April 2019, Volodymyr Zelenskyy was elected president, defeating Poroshenko, and in September 2020, he approved Ukraine’s new National Security strategy, said Ukraine needs an MAP, and expressed his hope that Ukraine would receive that at the NATO summit scheduled for this past June. At the June summit, NATO reached an historic decision: In paragraph 69 of the Summit Communique, the 30 NATO leaders said, “We reiterate the decision made at the 2008 Bucharest Summit that Ukraine will become a member of the Alliance with the Membership Action Plan (MAP) as an integral part of the process; we reaffirm all elements of that decision…We stand firm in our support for Ukraine’s right to decide its own future and foreign policy course free from outside interference.”

Biden and Putin spoke for two hours in Tuesday’s video call. The White House readout of the call said, “President Biden voiced the deep concerns of the United States and our European Allies about Russia’s escalation of forces surrounding Ukraine and made clear that the U.S. and our Allies would respond with strong economic and other measures in the event of military escalation. President Biden reiterated his support for Ukraine’s sovereignty and territorial integrity and called for de-escalation and a return to diplomacy. The two presidents tasked their teams to follow up, and the U.S. will do so in close coordination with allies and partners.” The Kremlin released a longer statement that, among other things, attributed responsibility for the current situation, not surprisingly, to NATO rather than to Russia, saying that NATO “is making dangerous efforts to conquer Ukrainian territory.” The statement also gave a bit more information about the follow-up talks. It said Russia “is seriously interested in receiving reliable, legally binding guarantees ruling out the eastward expansion of NATO” and the deployment of “weapons systems posing a threat to Russia in close proximity” to it—both of which were concerns Putin had described in his comments on December 1. The Kremlin statement also said Biden and Putin had “agreed to task their representatives with entering into detailed consultations on these sensitive issues.”

Putin elaborated on the Kremlin’s statement the next day in a press conference after his meeting with Greek Prime Minister Kyriakos Mitsotakis. Asked about his comments last week about Russia’s “red lines” that can’t be crossed, including the further eastward expansion of NATO, and his conversation with Biden, Putin said, “As for NATO, it is a military bloc. Regretfully, the NATO bloc is pursuing a confrontational line towards Russia. The latest issues are seemingly technical, but nevertheless, the expulsion of diplomats, which ultimately made us close the respective NATO agency in Moscow, shows that the alliance is unfriendly to us, to put it mildly. In addition, they declare Russia to be an adversary.” In regard to his conversation with Biden, he said, “We discussed regional issues, the conflict in southeastern Ukraine and one more issue that is related to this situation and is very sensitive for us—namely, the eastward expansion of NATO, including by way of Ukraine joining it. This is one of the key issues behind ensuring Russia’s security in the medium term and even for the strategic outlook. We speak about this constantly and publicly, and let our partners know that this is unacceptable for us….No doubt every country is entitled to choose the most acceptable way to ensure its security, but this should be done so as not to encroach on the interests of other parties and not to undermine the security of other countries in this case, Russia.” While emphasizing that his conversation with Biden was “very open, substantive and, I would say, constructive,” Putin nevertheless reiterated, “We are bound to be concerned over the prospect of Ukraine’s potential accession to NATO because this will be followed by the deployment of corresponding troop contingents, bases and weapons that threaten us….We proceed from the premise that our concerns will be heard, at least this time. That said, over the past few decades we continuously expressed our concerns and asked out partners to abstain from certain actions but nonetheless NATO infrastructure inevitably moved closer to our borders and now we are seeing Mk 14 missile defense systems in Poland and Romania. We have every reason to believe that the same will happen in Ukraine if NATO accepts it. How can we not think about this? Looking on helplessly at what is happening there would be simply criminal negligence. This is exactly what our talks dealt with. Let me repeat again; we have agreed to create a relevant structure that will be in a position to address this problem practically and thoroughly and will present relevant proposals. I must admit that the US President put forward this idea. I agreed with it and said that we will soon submit our ideas and proposals in this regard.”

In his April 2005 State of the Nation address, Putin famously said, referring to the 20th century, “The demise of the Union was the greatest political catastrophe of the century.” If he were asked to identify the greatest political catastrophe of this century, he would no doubt say the eastward expansion of NATO—specifically, the threat to its security Russia will face if Ukraine joins NATO. What, if anything, he can and will do about that remains to be seen.

David R. Cameron is a professor emeritus of political science and the former director of the MacMillan Center’s Program on European Union Studies.