Yara Sallam: On being a women’s human rights defender in Egypt 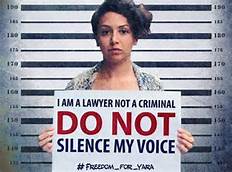 In April, Yara Sallam, Director of the Criminal Justice Unit at the Egyptian Initiative for Personal Rights, gave a thought-provoking talk on what it’s like to be a women’s human rights defender in Egypt. Mindy Roseman, the Director of International Programs and Director of the Gruber Program for Global Justice and Women’s Rights at Yale Law School, introduced the speaker, highlighting not only her professional background, but also her personal profile as a person of passion, and her world view as “an optimist against all odds.” Roseman quoted from Sallam’s blog; “my life, if it can have any meaning at all or if it will be ever remembered, I want it to be about hope, laughter, joy, passion and love for life. My revolution is the same.” (view video)

Sallam focused her introductory remarks on two main ideas – how to define “a women’s human rights defender” in Egypt, and how to push women’s rights issues to the top of the political agenda, at a time when many voices, even those counted as revolutionary, would argue that “the time may not be ripe to work on women’s rights issues.” Sallam also discussed how high-profile activists would be granted platforms, while other defenders go unnoticed and are fighting their battles without support. One of the main challenges since 2011 has been how to give a voice to women’s human rights defenders who fall in the later category. “There is a lot of hope when we move away from the traditional structures and think out of the box,” said Sallam.

The Q&A session that followed Sallam’s talk covered the human rights situation in Egypt in general, as well as Sallam’s own experience serving 15 months in prison for what was known as the “Al-Ettehadiya Case.” Sallam reflected on her time at Al-Qanater Prison ­­– which was built by British architects – and how it was described as a “nice prison” compared to other prisons in Egypt built after French and American architecture. The British architecture provided rather big cells and fair amount of natural light. However, throughout the 15 months they served in prison, Sallam and her six cellmates were banned from mingling with other prisoners, and were confined in their cell for 22 hours a day. “Now that I have been to jail, it opened my eyes to how we should rethink imprisonment, the death penalty, and the entire criminal justice system,” said Sallam.

The talk was co-sponsored by the Program on Refugees, Forced Displacement, and Humanitarian Responses, the Gruber Program for Global Justice and Women’s Rights, and the Schell Center for International Human Rights.

Written by Hanan Elbadawi, Predoctoral Fellow and Program Manager, Program on Refugees, Forced Displacement, and Humanitarian Responses at the MacMillan Center at Yale.