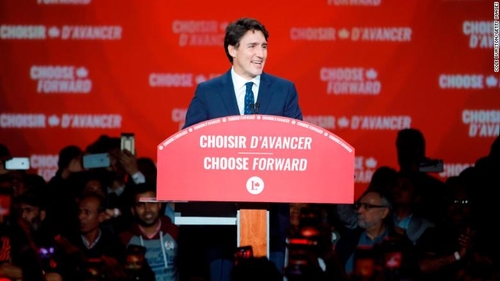 At a Tuesday panel, experts of Canadian studies examined the country’s politics, a topic of international interest given Monday’s reelection of Canadian Prime Minister Justin Trudeau — an official recently fraught with scandal, a corruption inquiry and questions of failing leadership.

Many of the panelists — who addressed about 20 attendees in Luce Hall on Tuesday afternoon — said it was too soon to fully understand how voters feel toward Trudeau, his Liberal Party and the general state of Canadian politics. Instead, Canadian Bicentennial Visiting Professor Jocelyn Létourneau, who chaired the event, said the panel was an opportunity “to have a very first look of what happened yesterday.”

Two major scandals — a corruption inquiry into Trudeau’s administration and news that the prime minister had worn brownface and blackface as a young adult —seeped into the Canadian political sphere ahead of the country’s Monday elections. Still, Trudeau narrowly won a second term, but his Liberal Party lost its governmental majority.

“If anything, I was surprised that Trudeau did as well as he did, given all the bad publicity that he received, a good amount of it deserved,” said political science professor David Cameron. “It was a bit surprising that the Liberals weren’t hurt more.”

Each of the panelists addressed the election results from a different angle. Coordinator of the Committee on Canadian Studies and history professor Jay Gitlin said he feared the American media does not cover Canada effectively. He added that Yale’s campus is addressing the election more thoroughly than the United States at large, as evidenced through events like Tuesday’s panel. In his introductory remarks, Létourneau added that this election was a rare example of Canadian politics offering “a more interesting show than its American counterpart.”

Alexander Slater ’99, a former advisor to the reelection campaign of former Canadian Prime Minister Paul Martin, focused on the role of international issues, such as climate change. While Trudeau presented himself as a leader on climate, he also built multiple pipelines, which “caused a lot of folks to lose faith in him,” Slater said. This controversial choice runs in contrast to the Liberal Party’s reputation as the only party best equipped to handle the climate crisis. Young voters’ appreciation of such progressive views helped the party maintain a majority in 2015. While it is unclear exactly how the Liberal Party’s mixed legacy on climate change affected the votes, Slater said it is undeniable that the issue “played a very prominent role in this election.”

Slater also said that U.S.-Canada and U.S.-China relations were nonissues in the election—a fact he viewed as potentially problematic, considering both are relevant to alleviating the “economic anxieties” of Canadian voters.

Brendan Shanahan, a postdoctoral associate at the Center for the Study of Representative Institutions and a visiting lecturer in the History department, focused on the historical context for the election. He outlined several periods of Canadian history, comparing eras like the present—which has a minority government—to those with majorities.

Like Shanahan, Cameron also discussed the results of the election more generally. Cameron was surprised by the results in Quebec, as the Liberal Party did not win a majority of votes in the relatively progressive area, a departure from the 2015 election. Létourneau also addressed the surprise in Quebec, adding that he believed it was not Trudeau’s many scandals that troubled the province’s voters, but rather his decision to build the Trans Mountain Pipeline and the prime minister’s general “lack of leadership.”

Members of Yale’s sizable Canadian community expressed gratitude for the panel. Adam Rothman ’22 raised his hand at the end of the event and thanked the speakers for “making our Canadian presence felt on campus.” On a much larger scale, multiple panelists felt it was critical to examine Canadian politics in this tumultuous era of American liberal democracy.

“I don’t think you can replicate in one country what’s going on in another country, but look up north just to see the different possibilities that exist,” Létourneau told the News.

The event was sponsored by the Committee on Canadian Studies at the MacMillan Center. Henry R. Luce Hall is located at 34 Hillhouse Ave.