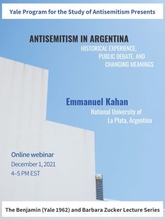 The Benjamin (Yale 1962) and Barbara Zucker Lecture Series
Antisemitism has a long history in Argentina with notable peaks, particularly during the 20th Century. During that period different cultural and political figures crafted and spread antisemitic tropes such as “conspiracy theories,” Holocaust denial, and anti-Zionist narratives in order to turn Jews into outcasts. This presentation will attempt to review some of the most important manifestations of that phenomenon, as well as the various means by which the Jewish community resisted these attacks.