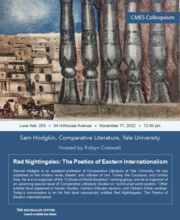 Hosted by Robyn Creswell
Samuel Hodgkin is an assistant professor of Comparative Literature at Yale University. He has published on the modern verse, theater, and criticism of Iran, Turkey, the Caucasus, and Central Asia. He is a co-organizer of the “Cultures of World Socialism” working group, and he is organizer of an upcoming special issue of Comparative Literature Studies on “communist world poetics.” Other articles have appeared in Iranian Studies, Cahiers d’études iraniens, and Cahiers d’Asie centrale. Today’s conversation is on his first book manuscript, entitled Red Nightingales: The Poetics of Eastern Internationalism.