CMES Colloquium: In the Shade of the Sunna: Salafi Piety in the 20th Century Middle East 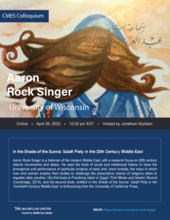 Aaron Rock-Singer is a historian of the modern Middle East, with a research focus on 20th century Islamic movements and states. He uses the tools of social and intellectual history to trace the emergence and performance of particular projects of piety and, more broadly, the ways in which men and women employ their bodies to challenge the prescriptive visions of religious elites to regulate daily practice. His first book is Practicing Islam in Egypt: Print Media and Islamic Revival (Cambridge, 2019), and his second book, entitled In the Shade of the Sunna: Salafi Piety in the Twentieth-Century Middle East, is forthcoming from the University of California Press.
The event will take place both in person (open only to Yale Affiliated) and online (open to all).