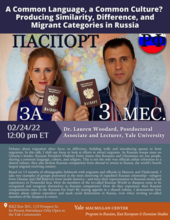 REEES Program at the Yale MacMillan Center presents Dr. Lauren Woodard, Postdoctoral Associate and Lecturer, Yale University, on “A Common Language, a Common Culture? Producing Similarity, Difference, and Migrant Categories in Russia”
Location: (Yale Community Only in-person) Rosenkranz Hall Rm 301, 3rd fl, 115 Prospect St. Lunch will be provided.
maybe on zoom
Debates about migration often focus on difference, building walls and introducing quotas to limit migration. In this talk, I shift our focus to look at efforts to attract migrants. As Russian troops mass on Ukraine’s border, Russian President Vladimir Putin claims that Russians and Ukrainians are one people, sharing a common language, culture, and religion. This is not the only way officials utilize references to a shared culture; they also beckon Russian compatriots from abroad to return to Russia, the world’s fourth largest migrant receiving country.
Based on 13 months of ethnographic fieldwork with migrants and officials in Moscow and Vladivostok, I take two examples of groups promoted as the most deserving of expedited Russian citizenship—refugees from Ukraine and Old Believers from South America—and trace their representation in Russian media and experiences in Primorskii krai. How do members of the so-called Russian World or diaspora come to be recognized and recognize themselves as Russian compatriots? How do they experience their Russian compatriotism once in the Russian Far East? By tracing appeals to a shared culture, I demonstrate how debates about culture reproduce and mask racial distinctions in Russia, even when inviting so-called members of the diaspora to return.