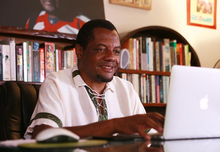 The Jackson Institute for Global Affairs will host a conversation with Hopewell Chin’ono, a Zimbabwean human rights activist, award-winning journalist, and documentary filmmaker. The event is co-sponsored by the Poynter Fellowship in Journalism.

Chin’ono will speak about his exposure of corruption in Zimbabwe, the ruling government’s repeated detention of him and others seeking justice and share his ideas about how the international community and the Biden Administration can assist Zimbabweans.
In the past six months, Chin’ono was arrested three times and spent 81 days in prison. Chin’ono will also talk about his award-winning documentary film intended to combat the stigma mental health patients face in Zimbabwe and throughout Africa.
Hopewell is a Nieman Fellow at Harvard University – one of only 5 Zimbabwean journalists to have been awarded this prestigious Fellowship in journalism. He trained as a journalist at the Zimbabwean Institute of Mass Communications before attaining his first post-graduate Master of Arts degree in International Journalism from City University’s Journalism school in London. After graduating from City University, he worked with the BBC World Service as a freelance radio producer. In 2003, he returned to Zimbabwe to work for the BBC as a freelance correspondent.
He was awarded the British government’s Chevening scholarship in 2006 to read Film at Brunel University, where he obtained a Master of Arts degree in Documentary Practice in 2007. That same year, he made a multi-award-winning documentary film called Pain in My Heart. In 2008, he went on to win the 2008 CNN African Journalist of the Year award as well as the Kaiser Family Foundation Award for Excellence in HIV/AIDS Reporting in Africa. After making Pain in My Heart, he set up Television International in Zimbabwe, a production house that produced news for ITN and South Africa’s etv. He has also worked with CNN International as a field producer on special assignments.
The event is open to the public, but registration via Zoom is required.