Democracy, Violence, and Constitutional Order in South Asia and Beyond 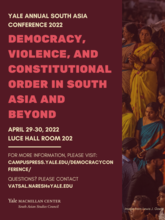 What limits do we come upon in thinking about concepts and practices without thinking beyond the region, diasporically, and analogically? How can studying South Asia inform knowledge and opinion on democratic principles in society and government, political violence, and constitutionalism? This conference brings together theorists, ethnographers, historians, legal scholars, and social scientists to examine Democracy, Violence, and Constitutional Order in South Asia and beyond.
Recent scholarship on South Asia has demonstrated that pervasive political violence is common in ancient, medieval, and modern subcontinental regimes. What is the motivation, purpose, pattern, effects, ends, and consequences of political violence? What kind of power is constituted by the display and/or performance of violence? What emotions and dispositions are activated in wielding, benefitting from, resisting, submitting to violence? To what extent is mass nonviolence a remedy to state and civil violence? To what extent do political foundings and radical social transformations require acts of coercion, force, violence? How can political communities be reconstituted in the wake of sustained violence?
Democracy exists as an ideal where violence is futile, but its experience as a form of rule has always been linked with violence, within, beyond and enclaved in a state’s boundaries. Does a democratic state differ meaningfully from its various adjective-laden synonyms or conceptual alternatives (liberal, majoritarian, ethno-, imperial, settler-colonial, despotic, authoritarian) in its exercise of political power? Understood as the spread of equality, democracy entails the reconfiguration of existing social relationships and hierarchies. How does violence figure as a tool, consequence, expression of the spread of equality, resistance to it, and recriminations against the spread of social equality?
Constitutional Order entails constructing a regime that can command legitimate obedience, and constitutionalizing its power such that it is both regulative of power and constructive or transformative towards different social and political ends. For South Asian regimes, this challenge has assumed different configurations, including legal regimes abetting and legitimizing destruction, displacement, and occupation. What are the consequences and legacies of different moments of constitutional ordering?