Empire, Satire, and Political Ambition in the Caucasus 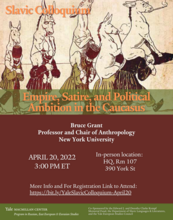 The Slavic Colloquium presents Bruce Grant, Professor and Chair of Anthropology at New York University, on “Empire, Satire, and Political Ambition in the Caucasus”
Register to attend in-person: https://bit.ly/SlavicColloquiumRegister
Location: HQ, Rm 107 (320 York St.)
Molla Nasreddin was a satirical, Azerbaijani-language broadsheet that ran from 1905 to 1931, lampooning the powerful across some of the most politically precarious years of Russian empire and Soviet Leviathan. With subscribers across the Turkic world from Greece to China, some have considered it the most influential popular periodical of the Muslim world at the outset of the twentieth century. In this talk, I introduce the journal’s politics as one that long flourished in the Caucasus region—through a continual jousting with and besting of one’s neighbors, in violence and recovery, and then almost always resuming trade and social contacts anew. As the apogee of this intensely competitive cohabitation of peoples, languages, and religions in a compact world area, Molla Nasreddin was also its epitaph. By engaging the genre of satire and its parallel worldviews in the work of of Mikhail Bakhtin and others, I contend that we find a communist rerouting of postcolonial ambition that speaks to ongoing political life in the region today.

Bruce Grant is Professor and Chair of Anthropology at New York University. A specialist on cultural politics in the former Soviet Union, he has done fieldwork in both Siberia and the Caucasus. He is author of In the Soviet House of Culture: A Century of Perestroikas (Princeton 1995), a study of the Sovietization of an indigenous people on the Russian Pacific coast, and winner of the Prize for Best First Book from the American Ethnological Society; as well as The Captive and the Gift: Cultural Histories of Sovereignty in Russia and the Caucasus (Cornell 2009), on the making of the Caucasus in the Russian popular imagination. He was co-editor of Caucasus Paradigms: Anthropologies, Histories, and the Making of a World Area (LIT 2007) and The Russia Reader: History, Culture, Politics (Duke 2010). His current research explores the early twentieth-century, pan-Caucasus journal Molla Nasreddin (1905-1931) as an idiom for rethinking contemporary Eurasian space and authoritarian rule within it.
He has been the recipient of grants from the American Philosophical Society, the American Council of Learned Societies, the John Simon Guggenheim Foundation, NCEEER (the National Council for East European and Eurasian Research), NEH, NSF, and the Wenner-Gren Foundation for Anthropological Research. He is a recent past president of the Society for Cultural Anthropology, interdisciplinary wing of the American Anthropological Association; and ASEEES, the Association for Slavic, East European, and Eurasian Studies.
Sponsored By: The Slavic Colloquium; The Edward J. and Dorothy Clarke Kempf Memorial Fund; the Department of Slavic Languages and Literatures; Yale European Studies Council; Yale REEES Program; and Yale MacMillan Center