Fighting the Abortion Ban in Poland 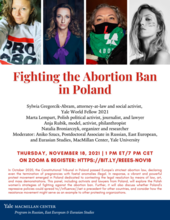 November 18th, 1 pm (EDT) and 7 pm (CET), the REEES Program at Yale presents “Fighting the Abortion Ban in Poland”
Featuring:
Sylwia Gregorcik-Abram, attorney-at-law and social activist, Yale World Fellow 2021
Marta Lempart, Polish political activist, journalist, and lawyer
Anja Rubik, model, activist, philanthropist
Natalia Broniarczyk, organizer and researcher
Moderator: Aniko Szucs, Postdoctoral Associate in Russian, East European, and Eurasian Studies, MacMillan Center, Yale University
Register to attend on Zoom: https://bit.ly/REEES-Nov18
In October 2020, the Constitutional Tribunal in Poland passed Europe’s strictest abortion law, declaring even the termination of pregnancies with foetal anomalies illegal. In response, a vibrant and powerful protest movement emerged in Poland dedicated to contesting the legal resolution by means of law, art, and mass demonstrations. This panel, including activists and lawyers from Poland, will explore the Polish women’s strategies of fighting against the abortion ban. Further, it will also discuss whether Poland’s repressive policies could spread to//influence//set a precedent for other countries, and consider how the resistance movement might serve as an example to other protesting organizations.
Participants’ Bio:
Natalia Broniarczyk is a feminist, an abortion companion, and the co-founder of the “Abortion Dream Team” and “Abortion Without Borders,” two organizations that counsel Polish women on how to find and take abortion pills and conduct public workshops to provide women with information related to reproduction health. As a Ph.D. student at the Institute of Applied Social Sciences at University of Warsaw, she researches abortion, self-service and women’s strategies of helping themselves and each other in abortions.
Sylwia Gregorcik-Abram is an attorney-at-law and social activist, working with NGOs on developing a democratic civil society and protecting the rule of law in the Polish justice system. She is Co-Founder of the Justice Defense Committee and the Free Courts Foundation, both of which monitor and archive political pressure on judges and lawyers, giving them legal aid. She regularly participates in legislative processes in Poland’s Parliament as an expert in parliamentary Constitutional Governance and Reform of the Justice System groups. She also presents on the state of the Polish justice system to the European Commission. Since 2017, Sylwia has led the organization of many demonstrations and protests in defense of the rule of law and repressed judges. She represents national and sexual minorities, refugees, victims of violence, and police brutality before courts. She also represents Supreme Court judges before the EU Court of Justice and European Court of Human Rights in key proceedings on the independence of courts and judges.
Anja Rubik is a Polish supermodel, activist, philanthropist and creative. She is considered to be one of the most internationally successful and influential models of the mid- to late-2000s to today. Over the years Rubik has transcended the fashion world into social and environmental issues in many forums and many different platforms. Since 2017, Rubik has been a Creative Consultant and Ambassador for Parley and works tirelessly with the organisation to bring to life global campaigns about ocean awareness and sustainability. In 2017, Rubik launched the #sexedPL campaign that developed into a movement and ended up becoming one of the most innovative educational concepts in Poland.
Marta Lempart is a Polish political activist, journalist, lawyer, and the initiator and one of the leaders of the Ogólnopolskiego Strajku Kobiet (Polish Women’s Strike). Active since 2016 in widespread protests against tightening abortion laws under the conservative Law and Justice party, Lempart has been targeted by the government with arrests and legal charges, and faced death threats from opponents of the protests. She organized numerous protests, including in defense of an independent judiciary. Her work has also included advocating for equal rights for members of Poland’s LGBT community and for people with disabilities.