Imagining Ancient Iranian Philosophy in the Early Modern Islamic World: The Sources and Afterlife of the Dasātīr-i Asmānī (‘The Celestial Laws’) 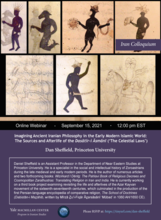 Daniel Sheffield is an Assistant Professor in the Department of Near Eastern Studies at Princeton University. He is a specialist in the social and intellectual history of Zoroastrians during the late medieval and early modern periods. He is the author of numerous articles and two forthcoming books: Wizirkard ī Dēnīg: The Pahlavi Book of Religious Decrees and Cosmopolitan Zarathustras: Translating Religion in Iran and India. He is currently working on a third book project examining revisiting the life and afterlives of the Azar Kayvan movement of the sixteenth-seventeenth centuries, which culminated in the production of the first Persian-language encyclopedia of comparative religion, The School of Doctrines (Dabistān-i Maẕāhib, written by Mīrzā Ẕu’l-Fiqār  ẕarsāsānī ‘Mūbad’ in 1060 AH/1650 CE).