Iran Colloquium: The Journey a Poem Makes: A Persian Elegy Across Languages 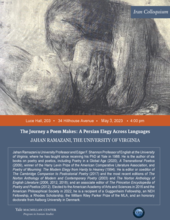 Hosted by Samuel Hodgkin
Jahan Ramazani is University Professor and Edgar F. Shannon Professor of English at the University of Virginia, where he has taught since receiving his PhD at Yale in 1988. He is the author of six books on poetry and poetics, including Poetry in a Global Age (2020), A Transnational Poetics (2009), winner of the Harry Levin Prize of the American Comparative Literature Association, and Poetry of Mourning: The Modern Elegy from Hardy to Heaney (1994). He is editor or coeditor of The Cambridge Companion to Postcolonial Poetry (2017) and the most recent editions of The Norton Anthology of Modern and Contemporary Poetry (2003) and The Norton Anthology of English Literature (2006, 2012, 2018); and an associate editor of The Princeton Encyclopedia of Poetry and Poetics (2012). Elected to the American Academy of Arts and Sciences in 2016 and the American Philosophical Society in 2022, he is a recipient of a Guggenheim Fellowship, an NEH Fellowship, a Rhodes Scholarship, the William Riley Parker Prize of the MLA, and an honorary doctorate from Aalborg University in Denmark.