Iran Colloquium: Qizilbash Magic: The Science of Fighting and Feasting in Safavid Iran 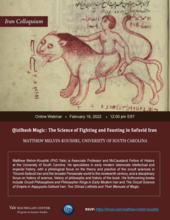 Matthew Melvin-Koushki (PhD Yale) is Associate Professor and McCausland Fellow of History at the University of South Carolina. He specializes in early modern Islamicate intellectual and imperial history, with a philological focus on the theory and practice of the occult sciences in Timurid-Safavid Iran and the broader Persianate world to the nineteenth century, and a disciplinary focus on history of science, history of philosophy and history of the book. His forthcoming books include Occult Philosophers and Philosopher Kings in Early Modern Iran and The Occult Science of Empire in Aqquyunlu-Safavid Iran: Two Shirazi Lettrists and Their Manuals of Magic.