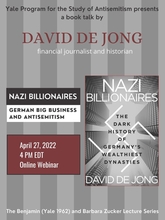 The Benjamin (Yale 1962) and Barbara Zucker Lecture Series
Following Adolf Hitler’s seizure of power in early 1933, most German businessmen started to vigorously capitalize on Nazi Germany’s newly codified antisemitism. These men began to remove Jewish executives from their company boards, before indiscriminately seizing Jewish-owned businesses - first in Germany then across Nazi-occupied Europe. Many of the German moguls ended up using Jewish men and women as slave laborers in their factories and mines during World War II. But were many of these tycoons ardent Nazis, who unquestioningly embraced Hitler’s ideology and antisemitism to begin with? Or were most simply calculating, unscrupulous opportunists looking to expand their business empires at any cost?