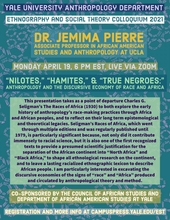 This presentation takes as a point of departure Charles G. Seligman’s The Races of Africa (1930) to both explore the early history of anthropology’s race-making practices through Africa and African peoples, and to reflect on their long term epistemological and theoretical legacies. Seligman’s Races of Africa, which went through multiple editions and was regularly published until 1979, is particularly significant because, not only did it contribute immensely to racial science, but it is also one of the first recognized texts to provide a presumed scientific justification for the separation of the African continent into “North Africa” and “Black Africa,” to shape all ethnological research on the continent, and to leave a lasting racialized ethnographic lexicon to describe African people. Dr. Pierre’s work is particularly interested in excavating the discursive economies of the signs of “race” and “Africa” produced and circulated by anthropological theory and method.