Precarity For All: or the Constitution of Unfreedom in 21st-Century Liberal Democracies 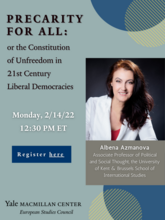 The European Studies Council of the MacMillan Center, Yale University, presents Albena Azmanova, Associate Professor of Political and Social Thought, the University of Kent’s Brussels School of International Studies
Register to attend on zoom: https://bit.ly/Yale-AlbenaAzmanova
Precarity, not inequality, is what ails the 99 per cent, argues Albena Azmanova in her latest book Capitalism on Edge (Columbia University Press, 2020). A daring and unapologetic intervention in post-2008 financial crisis leftism, the book offers a radical alternative to traditional anti-capitalist narratives which place class conflict at the center of their critiques. Azmanova claims rather that the central social injustice of the modern age is the emergence of ‘precarity for all’, as even the privileged inhabitants of the wealthy West live in constant social and economic insecurity. It is this perennial state of anxiety which fosters social and political animosity and feeds what is mistakenly labeled ‘populism’, she claims. Both polemical and analytic, Azmanova rejects tropes of capitalism in crisis, as well as calls for revolution to combat. What we need, she instead proposes, is to abandon the rhetoric of utopia, and to embrace reform beyond ideological boundaries. As such, rather than asking how we might better capitalism or how we might dismantle it, Azmanova presents a policy-based action plan aimed at subverting it from within.
The book has received numerous awards, among which is the Michael Harrington Award, with which the American Political Science Association “recognizes an outstanding book that demonstrates how scholarship can be used in the struggle for a better world”. The eminent U.S. economist James Galbraith has called it ‘the big-think book of our times’ and former U.S. Secretary of Labor Robert Reich has praised it for its innovative take on contemporary capitalism.