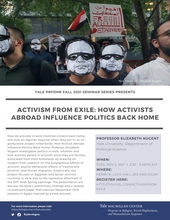 How do activists in exile mobilize citizens back home, and how do regimes respond when they do? In an on-going book project titled Exiles: How Activist Abroad Influence Politics Back Home, Professor Elizabeth Nugent investigates politics in exile, whether and how activists persist in activism once they are forcibly dislocated from their homeland, by drawing on insights from research on the biographical effects of activism, psycho-behavioral effects of trauma and emotion, and forced migration. Empirically, the project focuses on Egyptian and Syrian activists currently in exile due to the repressive aftermath of the 2011 Arab Spring uprisings. The presentation will discuss the book’s preliminary findings and a related co-authored paper that explores September 2019 protests in Egypt inspired by exiled activists.
Professor Nugent is an assistant professor of political science at Yale University. She is the author of After Repression: How Polarization Derails Democratic Transition, published by Princeton University Press (2020). Her research explores the political psychology of religion and repression in the Middle East and has been published or is forthcoming in the American Journal of Political Science, Comparative Political Studies, Journal of Conflict Resolution, Proceedings of the National Academy of Sciences, and World Politics. Professor Nugent holds a doctorate in politics from Princeton University as well as a B.A. in Arabic and an M.A. in Arab Studies, both from Georgetown University. She previously was a postdoctoral research fellow with the Middle East Initiative at Harvard Kennedy School of Government’s Belfer Center for Science and International Affairs.