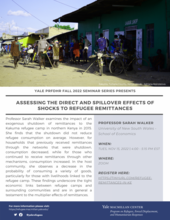 Professor Sarah Walker examines the impact of an exogenous shutdown of remittances to the Kakuma refugee camp in northern Kenya in 2015. She finds that the shutdown did not reduce refugee consumption on average. However, for households that previously received remittances through the networks that were shutdown, consumption decreased, while for those who continued to receive remittances through other mechanisms, consumption increased. In the host community, she observes a decrease in the probability of consuming a variety of goods, particularly for those with livelihoods linked to the refugee camp. These findings underscore the tight economic links between refugee camps and surrounding communities and are in general a testament to the multiplier effects of remittances.
Dr. Sarah Walker is an applied microeconomist and a Senior Lecturer at the School of Economics at the University of New South Wales in Sidney, Australia. Her research focuses on development, economic history, culture and institutions, and the intersection of these topics with the environment. Her work often takes her to various corners of the world, including East Africa, Eastern Europe, and the Pacific Islands.
She was awarded in 2020 the Paul Bourke Award for Early Career Research by the Academy of Social Sciences in Australia. She is also a 2020 recipient of the Discovery Early Career Research Award (DECRA) from the Australian Research Council (ARC).
She currently sits on the executive committee for the Adasina Social Justice fund and she has previously held consultancies with the World Bank and worked for boutique financial services.