PRFDHR Seminar: On War and Architecture: A Tale of a Syrian City, Dr. Ammar Azzouz 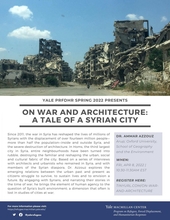 Since 2011, the war in Syria has reshaped the lives of millions of Syrians with the displacement of over fourteen million people—more than half the population—inside and outside Syria, and the severe destruction of architecture. In Homs, the third largest city in Syria, entire neighbourhoods have been turned into rubble, destroying the familiar and reshaping the urban, social and cultural fabric of the city. Based on a series of interviews with architects and urbanists who remained in Syria, and with members of the Syrian diaspora, Dr. Azzouz explores the emerging relations between the urban past and present as citizens struggle to survive, to sustain lives and to envision a future. By engaging with Syrians, and narrating their stories in the time of war, he brings the element of human agency to the question of Syria’s built environment; a dimension that often is lost in studies of cities at war.
Ammar Azzouz is a London-based architect, artist and writer. He has been working at Arup, London as an architect since 2017, and in 2019, he joined the University of Oxford as a Short-Term Research Associate at the School of Geography and the Environment. Azzouz completed his PhD in Architecture at the University of Bath, UK. He is also a Collective Member at CITY academic journal, an international editor at the RIBA’s Journal of Architecture, and an editor at Arab Urbanism. His work has been published on several platforms including the Independent, the New Statesman and the Architects’ Journal. His book on domicide, the killing of home, will be published by Bloomsbury in 2023.