A Queer Prince Scorned: Yuan Yue (d. 532) and his Repertoire 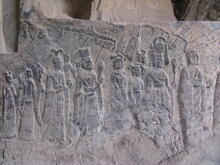 In this presentation, I explore primary source material documenting the life of Yuan Yue 元悅, Prince of Runan 汝南 (494–532), who is said to have enjoyed sex with men. A contender for the Northern Wei 北魏 (386–534) throne at the violent end of the dynasty, his official biography in the Book of the Wei recounts how he was prevented from acceding on account of his “queer nature” and questionable behavior. In attempting to understand the prince’s identity within the context of urban Luoyang, I read his biography alongside Buddhist sources from the period and ultimately argue that it was his relationship with Empress Dowager Ling 靈 (d. 528)—rather than his relationships with men—that informed the unsympathetic characterization of the prince that we see in his biography.
_________________
Stephanie Balkwill is Assistant Professor of Chinese Buddhism at UCLA where she is also the Associate Director of the Center for Buddhist Studies. She is interested in the public, literary, political, and intellectual lives of Buddhist women who lived in what we now call China between the 4th and 6th centuries. She is currently running a year-long project on Buddhist Epigraphy and Women’s History and she is also Co-Director of the Buddhist Bodies Collective, a newly-formed, international group of scholars working to re-think and restructure the ways that Buddhism is taught at the undergraduate level.
_________________
This event is being co-sponsored by the Glorisun Global Network for Buddhist Studies and the Council on East Asian Studies.