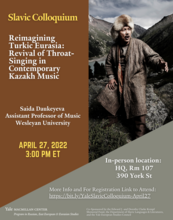 The Slavic Colloquium presents Saida Daukeyeva is Assistant Professor of Music at Wesleyan University, on “Reimagining Turkic Eurasia: Revival of Throat-Singing in Contemporary Kazakh Music”
Register to attend in-person: https://bit.ly/SlavicColloquiumRegister
Location: HQ, Rm 107 (320 York St.)
Kömei throat-singing is an attribute of neotraditional Kazakh music that fuses the sounds of revived folk instruments with Western popular music styles. A vocal practice not historically documented among Kazakhs, kömei was introduced to Kazakhstan from the Altai region of southern Siberia at the beginning of the twenty-first century and has since been reimagined as a national sound, emblematic of the Turkic nomadic origins of Kazakh culture and spirituality. In this talk, Saida Daukeyeva traces the history of the kömei revival in Kazakh music, asking: What forces have propelled its proliferation from a creative borrowing by one musician to a prominent feature of a local music scene? What is the appeal of this imported vocal practice as a sonic icon of indigeneity? She discusses contesting discourses on kömei in Kazakhstan and argues that, by invoking a Turkic sound and spiritual world in new forms of creativity, contemporary artists strive to expand the temporal and spatial horizons of Kazakh music and thus project a vision of a nation both connected to its ancient roots and attuned to globalized modernity.
Dr. Saida Daukeyeva is Assistant Professor of Music at Wesleyan University. Her research explores the intersection of sound with social and political geographies in Central Asia, focusing on Kazakh music and expressive culture across borders. She is the author of Philosophy of Music by Abu Nasr Muhammad Al-Farabi (Soros Foundation 2002, in Russian) and co-editor of The Music of Central Asia (Indiana University Press 2016).
Sponsored By: The Slavic Colloquium; The Edward J. and Dorothy Clarke Kempf Memorial Fund; the Department of Slavic Languages and Literatures; Yale European Studies Council; Yale REEES Program; and Yale MacMillan Center