Squirrel Hill: The Tree of Life Synagogue Shooting and the Soul of a Neighborhood 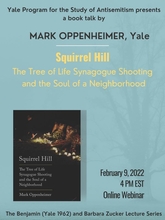 The Benjamin (Yale 1962) and Barbara Zucker Lecture Series
Squirrel Hill, Pittsburgh, is one of the oldest Jewish neighborhoods in the country, known for its tight-knit community and the profusion of multigenerational families. On October 27, 2018, a gunman killed eleven Jews who were worshipping at the Tree of Life synagogue in Squirrel Hill–the most deadly anti-Semitic attack in American history. In this talk, Mark Oppenheimer shifts the focus away from the criminal and his crime and instead presents the historic, spirited community at the center of this heartbreak. He discusses his findings—based on 250 interviews with residents and nonresidents, Jews and gentiles, survivors and witnesses, teenagers and seniors—about how neighborhood, and religious institutions, promote resilience.