Transnational, Multinational, or Imperial? The Paradoxes of Russia’s (Post-)Coloniality 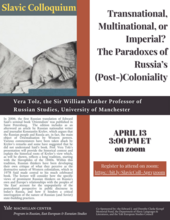 The Slavic Colloquium presents Vera Tolz, the Sir William Mather Professor of Russian Studies at the University of Manchester, on “Transnational, Multinational, or Imperial? The Paradoxes of Russia’s (Post-)Coloniality”
Register to attend on zoom: https://bit.ly/SlavicColl-Apr13zoom
In 2006, the first Russian translation of Edward Said’s seminal book Orientalism was published in Saint Petersburg. The edition includes as an afterword an article by Russian nationalist writer and journalist Konstantin Krylov, which argues that the Russian people and Russia are, in fact, the main object of Orientalisation by Western powers. Various commentators have been taken aback by Krylov’s remarks and some have suggested that he did not understand Said’s book. Prof. Vera Tolz’s presentation will provide the historical context and explain the historical roots of Krylov’s view which, as will be shown, reflects a long tradition, starting with the Slavophiles of the 1840s. Within this tradition, Russian thinkers have been developing their own critique of what they perceive as the destructive nature of Western colonialism, which in 1978 Said made central to his much celebrated book. The lecture will consider how the specific views of prominent Russian thinkers on Russia’s own and Europe’s relationships with the peoples of ‘the East’ account for the unpopularity of the postcolonial perspective in public discourse in today’s Russia, and how it hinders a critical interrogation of the nature of Russian (and Soviet) state-building practices.
Vera Tolz is Sir William Mather Professor of Russian Studies at the University of Manchester, United Kingdom. She has published widely on various aspects of Russian nationalism and the relationship between intellectuals and the state in the imperial, Soviet and post-Soviet periods. Her books include Between Professionalism and Politics: Russian Academicians and Revolution (1997); Russia: Inventing the Nation (2001); and Nation, Ethnicity and Race on Russian Television: Mediating Post-Soviet Difference (2014). Her book ‘Russia’s Own Orient’: The Politics of Identity and Oriental Studies in the Late Imperial and Early Soviet Periods (2011) was published in a Russian translation by Novoe Literaturnoe Obozrenie in 2013. In 2012-2016 Tolz was Co-Director of the UK’s national Centre for East European Language-Based Area Studies. She is an elected Fellow of the UK’s Academy of Social Sciences.
Sponsored By: The Slavic Colloquium; The Edward J. and Dorothy Clarke Kempf Memorial Fund; the Department of Slavic Languages and Literatures; Yale European Studies Council; Yale REEES Program; and Yale MacMillan Center