The War Next Door: Society and Conflict in Ukraine and Russia 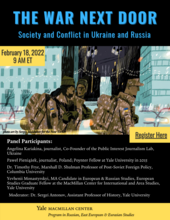 Angelina Kariakina, journalist, Co-Founder of the Public Interest Journalism Lab, Ukraine
Paweł Pieniążek, journalist, Poland; Poynter Fellow of Yale University in 2015
Dr. Timothy Frye, Marshall D. Shulman Professor of Post-Soviet Foreign Policy, Columbia University
Yevhenii Monastyrskyi, MA Candidate in European & Russian Studies, European Studies Graduate Fellow at the MacMillan Center, Yale University
Please Register to Attend on Zoom: https://bit.ly/REEESYale-UkrainePanel
For four months, a record number of Russian troops – over 100,000 – have been stationed on the Ukrainian border. Western intelligence and Ukrainian media are constantly harping on the threat of invasion. As a result of the crisis, Russian and US Presidents Vladimir Putin and Joe Biden met for the first time on December 7, 2021. In January, the US, Russia, NATO, and the OSCE held unprecedented talks a month later. They addressed Ukraine’s and Europe’s security. After three rounds of talks, Russian representatives declared the talks inconclusive and resorted to threats; the US, on the other hand, viewed the talks more optimistically and stated that the ball was now in Russia’s court, though they did not rule out the possibility that Russia was preparing an attack on Ukraine.
Tensions on the Ukraine-Russia border continue to grow, and it is becoming increasingly common to believe that forecasting the logic of a possible Russian invasion of Ukrainian territory is simply impossible. Ukraine, which has been at war with Russia-backed separatists in the Donbass since 2014 and has lost more than 14,000 people, is frozen in anticipation of an invasion. Russia’s motivations, the methods by which it is attempting to catalyze a full-scale war, as well as the question of how the Ukrainian and Russian populations would react to a potential outbreak of hostilities, remain unknown.