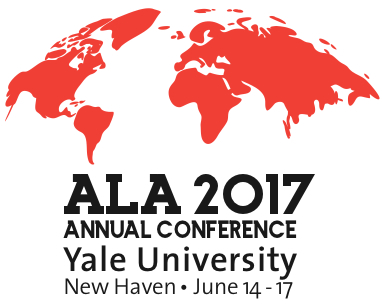 “Africa and the World: Literature, Politics, and Global Geographies” is the theme of the 2017 African Literature Association (ALA) Conference taking place at Yale University June 14-17.

The conference will bring together more than 600 participants from around the world and feature 165 panels exploring the usefulness of “world literature” as a framework for understanding the literatures of Africa and the Global South. Keynote lectures and panels will explore the possibilities offered by African literatures and cultures for (re)imagining the world. For the full program, visit the ALA website.

The event is sponsored by the Councils on African Studies and Middle East Studies at Whitney and Betty MacMillan Center for International and Area Studies at Yale with support from the Title VI National Resource Center Grants from the United States Department of Education.

There will be two keynote lectures; both will be held in the Law School auditorium, 127 Wall St.:

Simon Gikandi, the Robert Schirmer Professor of English at Princeton University, will present a lecture on “African Literature in the World: Imagining a Post-Colonial Public Sphere” 5:30–7 p.m. on June 15. The author of many books and numerous articles on African and colonial cultural history, Gikandi was editor of PMLA, the official journal of the Modern Languages Association (MLA), from 2011 to 2016 and is incoming president of the MLA.

Sengalese writer Boubacar Boris Diop will speak on “Que dit Cheikh Anta Diop aux ecrivains africains? (What was Cheikh Anta Diop’s advice to African writers?)” 10:30 a.m.-noon on June 16. (An English-language translation of this lecture will be provided.) Boris Diop is well-known throughout the francophone world for his work in genres as diverse as the novel, play, essay, and feature article, and for his work as former editor-in-chief ofLe Matin de Dakar, an independent daily Senegalese newspaper.

Six internationally renowned creative writers will also be at the conference, appearing in large auditorium events, as well as roundtable discussions in smaller venues:

Aminatta Forna is the award-winning author of three novels: “The Hired Man “(2014); “The Memory of Love” (2010), winner of the Commonwealth Writers’ Prize Best Book Award and shortlisted for the Orange Prize; and “Ancestor Stones” (2006), winner of the PEN Hurston/Wright Legacy Award.

Jennifer Nansubuga Makumbi is a Ugandan novelist and short story writer based in Manchester. Her debut novel, “Kintu,” won the Kwani Manuscript Project in 2013, and was longlisted for the 2014 Etisalat Prize. It has been called “a masterpiece, an absolute gem, the great Ugandan novel you didn’t know you were waiting for.”

Imbolo Mbue’s highly-anticipated debut novel, “Behold the Dreamers,” was published in August 2016 by Random House and won the PEN/Faulkner Award: It tells the story of a Cameroonian couple who emigrate to New York City, and the impact of the city on their relationship and lives.

Okey Ndibe is the author of the memoir “Never Look an American in the Eye: Flying Turtles, Colonial Ghosts, and the Making of a Nigerian American” (2016), as well as several novels, including “Foreign Gods, Inc.” (2014). His comic vision of immigrant life in America combines realism with satire and magical realism.

Imraan Coovadia is a novelist, essayist, and director of the creative writing program at the University of Cape Town. He is a graduate of Harvard and Yale (Ph.D., 2001), and is the author most recently of the novel “Tales of the Metric System,” described by Publisher’s Weekly as “layered, multifaceted,” testament to the nuanced attention given to the personal lives of diverse South Africans living at various moments of change and transition from 1970 to the present.

Deji Bryce Olukotun, also a Yale graduate (B.A. 2000) is a writer and activist whose recent novel, “Nigerians in Space”(2014), is a speculative thriller that details the life of a Nigerian immigrant, Dr. Wale Olufunmi, a lunar rock geologist working for NASA. Wale devises a plan to steal a piece of the moon after a Nigerian government official makes an offer to scientists working abroad to return to Nigeria, invest in the nation’s knowledge production, and make Nigeria the center of technology on the African continent.

The conference program includes a series of films to be screened at the Whitney Humanities Center, 53 Wall St. These include:

Other events include a “Variety Show” featuring 10-minute performances by some of the creative writers and poets attending conference; “Soundings in African languages,” an evening of readings in mother tongue African languages; sessions commemorating the work of the late Buchi Emecheta, the award-winning Nigerian-born British novelist who wrote about child slavery, motherhood, female independence, and freedom through education; and panels ranging from topics in film and visual media to women’s, gender, and queer studies.

In addition to the ALA and the MacMillan Center, conference sponsors include following organizations at Yale: Council on African Studies, Council on Middle East Studies, The Stephen and Ruth Hendel `73 Fund for Innovation in Africa, The Hakeem and Myma Belo-Osagie Forum on Contemporary Africa, The Windham-Campbell Prize, Department of English, Department of African American Studies, and Traphagen Alumni Speakers Series. Other sponsores are Hillyer College (University of Hartford), Office of the Dean of Faculty and Department of English (Brown University), and the Human Rights Institute (University of Connecticut).