After CDU elects new leader, who will be the CDU-CSU chancellor candidate? 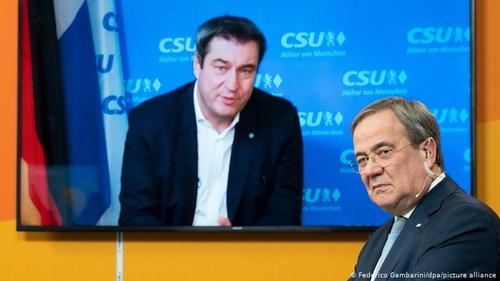 On Saturday, the German Christian Democratic Union (CDU) elected a new leader, Armin Laschet, the minister president of North Rhine-Westphalia. Whether he will be the chancellor candidate of the CDU and its Bavarian sister party, the Christian Social Union (CSU), in the September 26 Bundestag election remains to be seen; the CDU leader is usually the candidate, but many in the CSU and a good number in the CDU as well believe Markus Söder, the CSU leader and minister president of Bavaria, would be a stronger candidate. But what can be said at this early date is that Angela Merkel won’t be the candidate for the first since 2005, having decided in late 2018, after the CDU experienced substantial setbacks in several state elections, that she wouldn’t stand for reelection as leader at the party conference in December 2018 and wouldn’t seek reelection as chancellor in 2021.

The 2018 setbacks were preceded by significant losses for both the CDU and CSU – especially the CDU – in the September 2017 Bundestag election. The vote for the CDU dropped from 34.1 percent in 2013 to 26.8 percent and that of the CSU dropped from 7.4 percent to 6.2 percent. The combined CDU/CSU vote was the lowest since 1949, the first election in the post-World War II Federal Republic. The vote for the Social Democratic Party (SPD) which governs with the CDU and CSU in a “grand coalition” likewise dropped, from 25.7 percent in 2013 to 20.5 percent, the lowest in any election since World War II. The big winner was the far-right, xenophobic Alternative for Germany (AfD) which, fueled by opposition to the large number of refugees coming to Germany in the wake of the Syrian civil war and other conflicts in the Middle East, especially after Merkel’s famous “Wir schaffen das” statement in 2015, won 12.6 percent of the vote compared with 4.7 percent in 2013 and 94 seats compared with none in 2013 when it fell below the 5 percent threshold.

It was widely assumed after the 2017 election that Merkel, who had led the party since 2000, would step down from the leadership at some point before the 2021 election and wouldn’t be the CDU-CSU’s chancellor candidate in the election. Nothing had been said publicly, but the first sign of who might succeed her as CDU leader came in February 2018 when she nominated Annegret Kramp-Karrenbauer, the minister president of Saarland since 2011, to be secretary general of the CDU. Merkel, after all, had been named secretary general of the party herself in 1998, two years before she was elected leader.

Kramp-Karrenbauer, known colloquially as AKK, announced she would be a candidate for the position as did Friedrich Merz, a former leader of the CDU group in the Bundestag who opposed Merkel’s centrist tendencies and had challenged her unsuccessfully for the leadership, had left the Bundestag in 2009, and was currently the chairman of the supervisory board of several major firms. Jens Spahn, the minister of health who had been an effective administrator of the complex health system but who, like Merz, disagreed with Merkel’s immigration and economic policies, also announced his candidacy for the position. In the first round of voting, Kramp-Karrenbauer received 45 percent of the vote to 39 percent for Merz and 16 percent for Spahn. With Spahn eliminated, Kramp-Karrenbauer defeated Merz by a narrow margin, winning 52 percent of the vote in the second round.

A “red-red-green” coalition, consisting of the Left Party, the SPD and the Greens, had governed Thuringia after the 2014 election but came out a few seats short of a majority in the 2019 election while the CDU, the Free Democrats (FDP), and the AfD won a majority of the seats. But the CDU has a strict policy of non-cooperation with the AfD and Kramp-Karrenbauer and Merkel insisted that the Thuringian CDU adhere to that policy. But almost all of the CDU Landtag deputies disregarded their direction and in February 2020 voted in favor of a coalition with the FDP and AfD. Needless to say, the  decision set off a firestorm. Kramp-Karrenbauer said it was “a bad day for Thuringia and a bad day for Germany.” Merkel said, “It was a bad day for democracy, a day that broke with the long and proud tradition of the CDU’s values. This is in no way in line with what the CDU thinks, how we have acted throughout our party’s existence.” Calling the regional CDU’s decision “inexcusable” and “unforgivable,” she insisted that the election be annulled. The FDP leader who was elected minister-president resigned and, after the CDU and FDP abstained, the leader of the “red-red-green” coalition was reelected minister president.

But for Kramp-Karrenbauer the damage had been done, and soon thereafter she announced she had decided to resign as party leader and wouldn’t be the CDU’s candidate for chancellor in 2021. She said she would stay on as party leader until a new leader was chosen at a party conference and would stay on as defense minister, the position to which she had been appointed in July 2019 after Ursula von der Leyen was appointed president of the European Commission. Soon after Kramp-Karrenbauer announced her resignation, three leading figures in the CDU announced their candidacy for the position: Merz again; Norbert Röttgen, who has been the chair of the foreign affairs committee of the Bundestag since 2014 and prior to that served as the minister of the environment and as CDU leader in North Rhine-Westphalia until 2012; and Armin Laschet, who has led the CDU in North Rhine-Westphalia since 2012 and has headed a CDU-FDP coalition government as minister president since 2017. Spahn, who had been a candidate for the leadership in 2018, decided not to run and instead endorsed Laschet.

Only days later, the CDU experienced yet another setback in a state election—this one in Hamburg. No one expected the CDU to win or even do well in the election for the Bürgerschaft; after all, it had won only 15.9 percent of the vote in the previous election and Hamburg is the preserve of the SPD, Greens, and other left-of-center parties. Nevertheless, in yet another repudiation of the CDU, the party’s share of the vote dropped to 11.2 percent. In the wake of that vote, Kramp-Karrenbauer announced the party congress to elect a new leader, initially scheduled for later in 2020, would take place in April. Because of the onset of the Covid-19 pandemic, the congress was postponed until December, and then postponed again to last Friday and Saturday and arranged as a virtual conference.

There were more than a half-dozen polls taken between late September and last week that asked CDU voters who they supported as party leader. Merz, a longtime rival of Merkel who wanted to abandon her “grand coalition” centrism and move the party back toward the right, advocated adherence to a balanced budget and limits on immigration, and was opposed to the EU becoming a “transfer union” and taking on €750 billion of debt to fund the recovery from the pandemic. He was preferred by substantially more CDU voters—generally 35 to 40 percent—than either Röttgen or Laschet, in large part because many in the CDU saw him as the candidate best-suited, by ideology and temperament, to aggressively counter the AfD’s appeal and bring back to the CDU the many voters who had defected to the AfD.

Röttgen, unlike Merz, had served as leader of the CDU in North Rhine-Westphalia, the country’s largest state, had also, unlike Merz, served as a minister in the federal government in charge of one of the most important portfolios—environment—and had, again unlike Merz, played an important role in the Bundestag in shaping the country’s foreign policy. 20 to 30 percent of the CDU voters preferred him as the leader—in part, no doubt, because he would be a far more attractive chancellor candidate than Merz to voters in the center and center-left of the political spectrum, including those who support the Greens, which since mid-2019 had been attracting support from roughly 20-25 percent of the voters—significantly more than the SPD—and are, as a result, the CDU-CSU’s likely partner in a future coalition. In the polls taken between late September and last week, Röttgen was supported by 20 to 30 percent of the CDU voters, substantially less than Merz but twice the level of support—10 to 15 percent—for Laschet.

On Saturday, 1001 CDU delegates met in a virtual conference to elect the party’s new leader and—perhaps not a good sign for September—their choice reversed the preference-ordering CDU voters had revealed in the surveys. In the first round, Merz got 385 votes, Laschet 380 and Röttgen 224. In the second round, with Röttgen eliminated, Laschet received 521 votes to 466 for Merz and was thereby elected leader of the CDU.

Notwithstanding his limited support among CDU voters when compared with Merz and Röttgen, Laschet does have strengths the others lack. Most notably, he has served as the CDU’s leader in North Rhine Westphalia since 2012 and as minister president of the state since 2017. And as the leader of a coalition government with the FDP, he is experienced in forming and maintaining a coalition with another party. On the other hand, North Rhine Westphalia, the industrial heartland of the country, has moved slowly under Laschet in decommissioning power plants that rely on hard coal and continues to mine and burn lignite (brown coal), which obviously does not endear him to the Greens – the party that, given that the CDU-CSU is currently polling at 35-37 percent, the Greens at 18-20 percent, the SPD at 14-15 percent, and the FDP at 7-8 percent, is the most likely coalition partner for the CDU-CSU after September 26. Also, Laschet was slow last spring in implementing lockdown measures such as closing schools and imposing a curfew in response to the pandemic and has waffled, also, in addressing the challenge posed by Vladimir Putin and Russia in regard to the annexation of Crimea and, more recently, the poisoning of Alexei Navalny.

The CDU and CSU will decide in the near future who will be the Union’s chancellor candidate in the September election. The odds are high that, notwithstanding the facts that far more CDU voters favored Merz or Röttgen for the leadership and that his performance as minister president of the country’s largest state has been underwhelming, Laschet will be the CDU-CSU’s chancellor candidate. After all, there have been 19 federal elections in Germany and the CDU and CSU chose the leader of the CSU and minister president of Bavaria as their chancellor candidate in only two of them—in 1980, when Franz Josef Strauss was the candidate, and in 2002, when Edmund Stoiber was the candidate. And in both elections, the CDU-CSU lost to the SPD and its coalition partners—the FDP in 1980 and the Greens in 2002.

Söder, 54, has been a member of the Landtag for more than 26 years, has served as the state’s minister of federal and European affairs, minister of health and the environment, and, for seven years until becoming minister president in 2018, minister of finance, regional development and home affairs. Over that period, he has been at times a forceful critic of the federal government’s response to the eurozone debt crisis and the migration crisis, and he would no doubt draw support from the same constituency that supported Merz. But unlike Merz and like Laschet, he also agrees with Merkel’s centrist impulses and would draw support from the Green-leaning center left. On the other hand, he has only been the leader of the CSU for two years and the minister president of Bavaria for three years and he appears to realize that time is on his side and the best place for him right now is where he is – in Bavaria; as he has said many times, “My place is in Bavaria.” So the CSU will in all likelihood endorse Laschet as the Union’s chancellor candidate.