After phone calls, dinner & more talks, some progress in the EU-UK negotiation 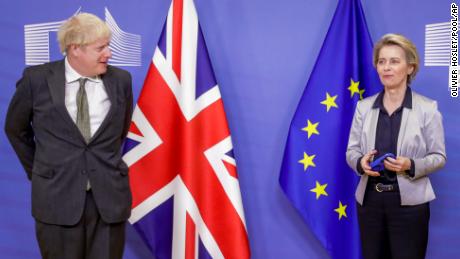 Finally, after two telephone calls between British Prime Minister Boris Johnson and European Commission President Ursula von der Leyen, a three-hour dinner in Brussels last Wednesday, and another phone call on Sunday, the EU and the UK appear to have made some progress in resolving one of the most difficult issues in the negotiation of their future relationship—how to maintain a level playing field for British and EU businesses competing with each other after the UK leaves the EU’s internal market and customs union at midnight on December 31. As a result, rather than ending two days ago without an agreement, as some had feared, the negotiation continues, with the aim of completing an agreement in time for it to take effect, even if only on a provisional basis, as of midnight on December 31.

On December 4, after a full week of intensive negotiation but with little progress on the issues on which the negotiation has been stalemated for months, Michel Barnier, the EU’s chief negotiator, and Lord David Frost, the UK’s chief negotiator, issued a joint statement in which they said the conditions for an agreement had not been met due to “significant divergences on level playing field, governance and fisheries” and they had agreed, on that basis, to pause the talks in order to brief their principals on the state of play of the negotiations. They said von der Leyen and Johnson would discuss the state of play the next afternoon.

On December 5, von der Leyen and Johnson spoke by phone for an hour and a half, after which they issued a joint statement in which they said that, while they welcomed the fact that progress had been made in many areas, nevertheless “significant differences remain on three critical issues: level playing field, governance and fisheries. Both sides underlined that no agreement is feasible if these issues are not resolved. While recognising the seriousness of these differences, we agreed that a further effort should be undertaken by our negotiating teams to assess whether they can be resolved. We are therefore instructing our chief negotiators to reconvene tomorrow in Brussels. We will speak again on Monday evening.”

Barnier and Frost resumed the negotiation in Brussels the next day and it went on until midnight and continued all day last Monday, after which von der Leyen and Johnson spoke again by phone for more than an hour. Afterwards, they issued another joint statement: “As agreed on Saturday, we took stock today of the ongoing negotiations. We agreed that the conditions for finalising an agreement are not there due to the remaining significant differences on three critical issues: level playing field, governance and fisheries. We asked our Chief Negotiators and their teams to prepare an overview of the remaining differences to be discussed in a physical meeting in Brussels in the coming days.” Last Tuesday, Barnier and Frost drew up a list of the outstanding differences and an agenda for the von der Leyen-Johnson meeting, after which Frost returned to London to brief Johnson for the meeting. Later that day, Frost tweeted, “Prime Minister Johnson will travel to Brussels tomorrow, 9 December, for dinner with European Commission President von der Leyen to continue our discussions on the future relationship between the UK and the EU.”

Last Wednesday’s dinner at the Commission’s Berlaymont headquarters went on for more than three hours during which von der Leyen, Johnson and their chief negotiators had—by her account a “lively and interesting discussion,” by his account a “frank discussion”—about the state of play in regard to the outstanding issues in the negotiation. The fact that the Commission and the Prime Minister’s Office issued separate statements after the dinner and used different wording made it clear the discussion had not resolved the differences between the two sides. In her statement, von der Leyen said, “We had a lively and interesting discussion on the state of play across the list of outstanding issues. We gained a clear understanding of each other’s positions. They remain far apart. We agreed that the teams should immediately reconvene to try to resolve these essential issues. We will come to a decision by the end of the weekend.” In its statement after the dinner, Johnson’s office said, “The leaders had a frank discussion about the state of play in the negotiations. They acknowledged that the situation remained very difficult and there were still major differences between the two sides. They agreed that Chief Negotiators would continue talks over the next few days and that a firm decision should be taken about the future of the talks by Sunday. The Prime Minister is determined not to leave any route to a fair deal untested, but any agreement must respect the independence and sovereignty of the UK.”

Last Thursday, von der Leyen tweeted, “Negotiations are still ongoing but the end of the transition is near. There is no guarantee that if & when an agreement is found it can enter into force on time. We have to be prepared including for not having a deal in place on 1 January. Today we present contingency measures” and included a link to the Commission’s proposed “targeted contingency measures to prepare for possible ‘no deal’ scenario.” Barnier tweeted, “Talks continuing in Brussels today with David Frost and team. Meanwhile, the Commission is preparing for all eventualities.” Johnson said he told the UK negotiators, who were reportedly dejected about the tone and outcome of the dinner, that “we’ve got to keep going, and we’ll go the extra mile—and we will. And I will go to Brussels, I will go to Paris, I will go to Berlin, I will go to wherever to try and get this home and get a deal.” (He apparently was unaware that, prior to the start of the negotiation, the EU stipulated there would be no negotiation between individual member states and the UK, and all negotiations would be conducted by and through the Commission and its chief negotiator.)  He also said the cabinet had agreed with him that “the deal on the table is really not at the moment right for the UK” and that he had directed it to prepare for a no-deal exit from the EU’s internal market on January 1: “What I told the cabinet this evening is to get on and make those preparations. We’re not stopping talks, we’ll continue to negotiate but looking at where we are I do think it’s vital that everyone now gets ready for that Australian option [i.e., trading with the EU on WTO terms]. (He apparently was unaware that Australia is currently negotiating a free trade agreement with the EU which it regards as preferable to trading with the EU on “Australia-style” terms.)

The negotiations continued over the next several days and on Sunday morning von der Leyen and Johnson spoke by phone again, after which they issued a joint statement: “We had a constructive and useful phone call this morning. We discussed the major unresolved topics. Our negotiating teams have been working day and night over recent days. And despite the exhaustion after almost a year of negotiations, despite the fact that deadlines have been missed over and over, we think it is responsible at this point to go the extra mile. We have accordingly mandated our negotiators to continue the talks and to see whether an agreement can even at this late stage be reached. The negotiations continue here in Brussels.” (Johnson’s office omitted the last sentence as well as “constructive” in the first sentence.)

Yesterday, Barnier briefed both the member states’ ambassadors to the EU and members of the European Parliament on the negotiation. He told them the EU and UK continue to disagree about the extent to which, conditions under which, and length of time during which EU fishermen and women will continue to have access to British waters. In particular, they disagree about the duration and terms of a transition period during which EU fishermen and women would have access to those waters. But importantly, he also told the ambassadors and MEPs there had been some progress in recent days on what is undoubtedly the most important unresolved issue for the EU—how to maintain a “level playing field” between EU and British firms in regard to rules and regulations pertaining to state subsidies and labor, health, and environmental standards. The EU has insisted that the UK continue to adhere, as it does now, to EU rules and standards while the UK has insisted that, as a sovereign state, it should not be required to remain “dynamically aligned” with EU rules and standards—i.e., that it should not be prevented from lowering its rules and standards, relative to those in the EU, through “non-regression” clauses; not be required to match increases in EU rules and standards through “evolution” or “ratchet” clauses; and not be subjected to punitive tariffs on goods affected by any unilateral UK decision to reduce its rules or standards relative to those in effect in the EU or to refuse to match an increase by the EU in its rules or standards. In his meetings yesterday, Barnier indicated the UK had agreed to work with the EU in designing a mechanism – he has called it a “rebalancing” mechanism – that would include a procedure for either side to raise an issue in regard to the impact of a difference in the EU and UK rules and standards, a methodology for measuring the impact of any difference or change in the rules and standards on the competitive advantage of the good in question, and a procedure for determining how the “imbalance” created by the particular rule or standard should be corrected, with the imposition of a tariff on the good in question being a “last resort” rather than a “first response.” He said the UK government had, “for the first time accepted a mechanism of unilateral measures” such as tariffs when there are “systemic divergences which distort trade and investment.” But, he said, “this mechanism needs to be credible, effective and quick. We are working on this.”

After yesterday’s meetings, Barnier tweeted, “It is our responsibility to give the talks every chance of success. Never before has such a comprehensive agreement (trade, energy, fisheries, transport, police & judicial cooperation, etc) been negotiated so transparently and in such little time. The next few days are important, if an agreement is to be in place on 1 January 2021. Fair competition and a sustainable solution for our fishermen and women, are key to reaching a deal.” Also yesterday, von der Leyen, meeting with French President Emmanuel Macron in Paris, likewise said there was “movement.” “That is good. We are talking about a new beginning with old friends. We are on the very last mile to go. But it is an essential one. We want a level playing field, not only at the start, but also over time and this is the architecture we are building.”

Time is running out. But some progress has been made in recent days and it is quite possible an agreement will, to the surprise of many, be concluded in the next several days. And so the talks go on.