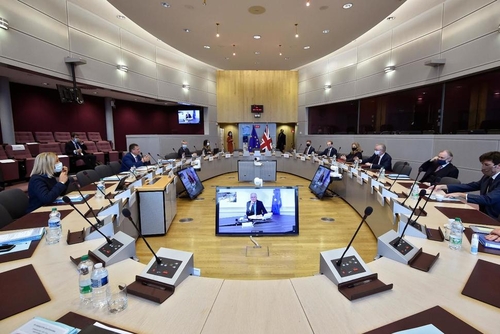 After two weeks of meetings of the chief negotiators and their teams in specialized sessions, the EU and UK negotiating teams, led respectively by Michel Barnier and David Frost, are meeting in Brussels this week in the ninth week-long round of negotiation of an agreement in regard to their future relationship after the UK leaves the EU’s single market and customs union at midnight on December 31.

Following as it does the uproar over the UK’s inclusion in its Internal Market Bill of provisions that would give ministers the powers to implement parts of the Protocol on Ireland/Northern Ireland contained in the EU-UK Withdrawal Agreement in ways that, by deviating from provisions in the Protocol, would constitute a breach of international law, few will be surprised if, at the conclusion of this week’s round, the chief negotiators announce, as they have after previous rounds, that little progress had been made toward an agreement. Resolving the differences between the EU and UK on the two most difficult issues standing in the way of an agreement—the EU’s insistence that the UK maintain a “level playing field” with the EU in regard to state aid for businesses and labor, health and environmental standards, and its insistence also that EU fishermen and women be able to continue fishing in UK waters under regulations that, like the EU’s Common Fisheries Policy, maintain access while limiting the size of catches and maintaining fish stocks—would be difficult in the best of circumstances. But given that the negotiators will be meeting this week in the shadow of the ultimatum the EU gave the UK on September 10 to remove by the end of the month the problematic provisions in its Internal Market Bill—an ultimatum the UK has blithely disregarded—it would be quite extraordinary if they were to make any progress in regard to those issues this week.

Yet that may happen—and not just because, with Prime Minister Boris Johnson having set a deadline of October 15 for concluding an agreement and the EU having made it clear that, if an agreement is to take effect as of January 1, 2021, it must be concluded by the end of October, both sides understand that time is running out. In speaking to the Council of Ministers last week, Barnier said that, although “substantial differences opinion remain, particularly on a level playing field,” there was “a more open atmosphere at the negotiating table.” Likewise, Frost characterized the two weeks of informal discussions since the previous week-long round as “relatively positive” and said a deal, although “very far from certain,” is “very much possible.” While the “level playing field” is an especially difficult issue, the two sides have been making some progress behind the scenes in exchanging proposals in regard to a fisheries framework agreement that, while respecting the rights of the UK, as an independent coastal nation, to manage its territorial waters, would provide for frequent, if not annual, negotiations in regard to access, quotas, and fish stocks and would, among other things, phase in an increase in the British share of the catch in exchange for lifting limits on EU fishing around the Channel Islands, including Jersey and Guernsey, which, although not part of the UK, are Crown Dependencies..

Nevertheless, there is that ultimatum. On September 8, Brandon Lewis, the Secretary of State for Northern Ireland, speaking from the dispatch box in response to a question in the House of Commons on whether certain provisions in the government’s proposed Internal Market Bill—specifically, provisions in sections 40-45 of Part 5 pertaining to the Northern Ireland Protocol—might breach the UK’s international obligations or international legal arrangements, said, “Yes. This does break international law in a very specific and limited way.” The comment provoked a firestorm of criticism. Former Prime Minister Theresa May, sitting on the backbenches, spoke for many when she immediately challenged his statement: “The United Kingdom government signed the withdrawal agreement with the Northern Ireland Protocol. This Parliament voted that withdrawal agreement into UK legislation. The government is now changing the operation of that agreement. How can the government reassure future international partners that the UK can be trusted to abide by the legal obligations of the agreements it signs?” Many echoed her view.

The next day, the European Commission President Ursula von der Leyen tweeted, “Very concerned about announcements from the British government on its intentions to breach the Withdrawal Agreement. This would break international law and undermines trust.” Her chief spokesman announced that Vice President Maroš Šefčovič, co-chair of the EU-UK Joint Committee that is responsible for overseeing the implementation of the Withdrawal Agreement, had called an extraordinary meeting of the Joint Committee—meaning a meeting between himself and Michael Gove, the Cabinet Office Minister and co-chair of the Joint Committee—in London the next day at which he would ask the UK government to elaborate on its intentions and respond to the EU’s serious concerns. Following the September 10 meeting, the Commission issued a statement in which it said Šefčovič “stated, in no uncertain terms, that the timely and full implementation of the Withdrawal Agreement, including the Protocol on Ireland/Northern Ireland—which Prime Minister Boris Johnson and his government agreed to, and which the UK Houses of Parliament ratified, less than a year ago—is a legal obligation. The European Union expects the letter and spirit of this Agreement to be fully respected. Violating the terms of the Withdrawal Agreement would break international law, undermine trust and put at risk the ongoing future relationship negotiations.” The statement said he made it clear that the Agreement, which entered into force on February 1, has legal effect under international law, and after that date neither the EU nor the UK can unilaterally change, clarify, amend, interpret, disregard of disapply it, and “if the Bill were to be adopted, it would constitute an extremely serious violation of the Withdrawal Agreement and of international law.” He called upon the UK to withdraw the measures from the Bill “in the shortest time possible and in any case by the end of the month” and stated that, by putting the Bill forward, the UK “has seriously damaged trust between the EU and the UK.”

In response to widespread outrage among many MPs, including a number of Conservative MPs and every former prime minister, the UK government put forward two amendments to the Internal Market Bill in the Committee Stage last week. One prevents an extension of the standard time limit for judicial review of regulations made under the provisions that would allow ministers to break the law. The other, prompted by an amendment proposed by Sir Robert Neill, a Conservative MP, that would have prevented any of the parts of the Bill that violate international law from taking effect unless approved by the House of Commons, requires that MPs approve the date on which the parts that would violate international law would take effect. Given the substantial Conservative majority in the House, both amendments passed without division.

But the bottom line for the EU is that, despite its insistence on September 10 that the provisions that would allow ministers to breach international law be removed from the bill by the end of the month, those provisions remain in the bill. The House of Commons will complete its consideration of the bill today and, assuming it is eventually approved, notwithstanding considerable opposition in the House of Lords, those provisions would take effect if and when the House of Commons approves the date on which they would take effect. Yesterday, Gove and Šefčovič met in Brussels to discuss the matter again. After the meeting, Šefčovič issued a statement in which he said, “I have repeated the EU’s request to withdraw the contentious parts of the draft Internal Market Bill by the end of September. We maintain that the Bill, if adopted in its current form, would constitute an extremely serious violation of the Protocol, as an essential part of the Withdrawal Agreement, and of international law. The Withdrawal Agreement is to be implemented, not to be renegotiated—let alone unilaterally changed, disregarded or disapplied.”  In his comments to the press, he also said the EU “would not be shy” in pursuing legal action against the UK—possibly taking the UK to the European Court of Justice or seeking an arbitration panel, if it fails to remove the contentious portions of the draft bill. He later told the European Parliament the Commission has not yet decided what action to take. He did say, however, that the EU will not suspend or end the negotiations now underway in regard to the future relationship. Gove, for his part, said, “Those clauses will remain in the bill.”

The European Council will meet on Thursday and Friday and will hear from Šefčovič about the situation regarding the UK bill and from Barnier about the current status of the negotiation of the future relationship. As they listen, the leaders will no doubt be wondering whether, if, as expected, the negotiators go into a “tunnel” of intensive negotiation for the next-two weeks, they will be asked at their meeting two weeks hence to approve a completed agreement, continuation of the negotiation, or termination of the negotiation and preparation for the UK’s abrupt departure from the single market and customs union at midnight on December 31. Chances are they won’t know the answer until they assemble again on October 15.