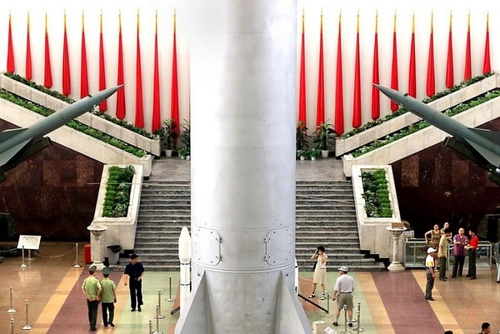 The following article written by Paul Bracken, professor of management and political science, appeared in The Strategist on August 5:

As I write this, China is building 100 new missile silos and doubling the size of its nuclear force. North Korea is expanding its arsenal to a hydrogen bomb that can reach the United States and also be used as tactical nuclear weapons. Pakistan and India are in an arms race, as Delhi fields its own nuclear triad. Russia is going outside of established arms control categories to field crazy weapons, like tsunami makers and multimegaton warheads. The US has begun its own trillion-dollar modernisation, with new missiles, submarines, bombers, and command and control. Even the UK is enlarging its force by 40%.

Serious concern—if not outright despair—about arms control is clearly justified. The outlook, in fact, is so dark that the small number of foundations that once supported nuclear arms control research have pulled out of the field, a mistake in my view. They’ve shifted their research to new areas like artificial intelligence and cyberwar, as if this change will somehow make nuclear weapons go away.

Yet, given all of this, I am reasonably confident that arms control will come back and that it has a brighter future than almost anyone today imagines. My reason is that the above phenomena are due to transitional pressures, and that once this temporary period is behind us arms control will come back. It will likely be a different kind of arms control whose shape isn’t yet clear. But this only means that we should begin thinking now about what its contours should be.

There are two reasons for my view. First, arms control was a project firmly based on a world order that was designed and run by the victorious powers of World War II. Now we are transitioning away from that order towards a more multipolar system that’s no longer Western dominated. It isn’t Western, but it isn’t Asian either. What it does mean is that the West’s monopoly on advanced military technologies has passed.

Maintaining a balance in military technology is one thing. Restoring a lop-sided pre-eminence is altogether different and unreachable. It will take a lot more than US government programs or required school classes in computer coding to return to a world of the 1970s, when the Western advantage was overwhelming. It would be like in the 19th century if Europe tried to stop American industrialisation and railroad building using embargoes, sanctions, monopolies and international law. Recall then that international law of the sea was a ‘rules based system’. But it was written by and for England’s benefit. America’s development was beyond European policies, even in the unlikely event that they could agree on a common strategy. It was built on technology, innovation and sovereign American decisions that Europeans could do little about.

Given the rise of non-Western powers, the passing of ‘classic’ treaty-based arms control is a natural development. The nuclear non-proliferation regime that was codified in the Nuclear Non-Proliferation Treaty tried to institutionalise a world in which the victorious powers of World War II kept their commanding positions. The US, Russia, China, Britain and France were allowed to have atomic weapons. No one else was. Yes, this was a rules-based system, but with two sets of rules: one for the West, and one for everybody else. The NPT was an effort to freeze-dry a world which even in the 1960s farsighted people could see was eroding.

But what’s taking place below the surface now is missed by the news cycle that drives American thinking. It is the loss of the major powers’ one-time monopoly on the bomb. This isn’t nuclear proliferation as much as it’s polycentrism and nationalism in a world where technology flows are unstoppable. To most of the world, the NPT looks like an attempt to hold on to a world we have lost, one of Western dominance, made safe for US strong conventional arms tactics. Until 10 years ago, it looked as if this qualitative technological edge would last forever. Now, Chinese technology advances cast even this in doubt.

Trying to reverse this state of affairs with arms control, or any combination of hard and soft power you care to choose, amounts to trying to change the arc of history. True, in certain extreme cases this has been attempted. Napoleon and Hitler both came close.

But this brings in a second factor. And it’s one that makes any attempt to radically change things today far different from earlier epochs: the transcendentally destructive potential of nuclear weapons. A maximum-effort war between the US and China for global predominance makes some kind of crazy sense if you look at the historical data of rising powers challenging established ones. But add nuclear weapons to the picture and the gains—any gains—vanish. In fact, they go starkly negative for all sides.

Major powers understand this. They don’t need a crystal ball to see the consequences of a thermonuclear war. This is the reason for the Chinese nuclear build-up. Beijing thereby removes any doubt that a war with the US could turn cataclysmic for both sides.

And it’s also why arms control has a brighter future than most people today think. In a few years it will be accepted that a purely Western-led global order isn’t in the cards. Most observers already know this. They may not like it, but they understand it. Using arms control to prolong an international order, or to create a ‘safe’ environment for America’s conventional war advantage that is somehow insulated from the risk of nuclear escalation, isn’t a realistic strategy.

But here we see the opportunity for arms control, even in a polycentric world. Major powers like China will surely see that a North Korea and Pakistan with several hundred weapons each pose at least as much danger to them as the US does. China’s other ally, Russia, is hardly a reliable friend that can be counted on. There’s real opportunity for arms control here, but only when it starts to solve real problems of the major powers, not when it’s used to slow down the passing of an old order.

The shape of arms control that emerges from the current soup of nuclear stalemates and instabilities isn’t clear. It needs definition, not despair about a world that isn’t coming back. This is exactly why now is a good time to reimagine arms control. A multipolar international order is going to need it. Arms control won’t preserve the old order. But it may very well shape the new one.