Canadian Liberals win election but, as expected, again fall short of a majority 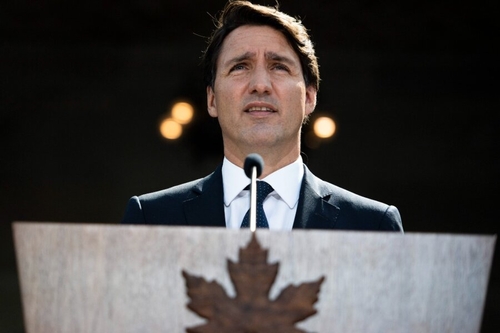 Hoping to win a Liberal majority in the Canadian House of Commons, on August 15 Prime Minister Justin Trudeau asked the Governor General, Mary Simon, to dissolve Parliament and call a new election on September 20. Trudeau, whose father Pierre Elliott Trudeau served as prime minister from 1968 to 1979 and 1980 to 1984, has led the Liberals since 2013 and became prime minister after the Liberals won a majority in the October 2015 election. In the October 2019 election, the Liberals lost their majority and since then Trudeau has headed a minority government with the occasional support on critical issues of the New Democratic Party (NDP).

In the October 2015 election, Trudeau and the Liberals won in a landslide over the Conservatives led by Prime Minister Stephen Harper. The Liberals won 39.5 percent of the aggregate vote in the country, a gain of 20.6 percentage points over their vote in 2011, and their candidates won 184 of the 338 ridings, the single-member electoral districts, an increase of 148 over the number won in 2011. That increase was the largest ever recorded in a Canadian election and gave the Liberals and Trudeau a substantial majority in the House. The Liberals won 80 ridings in Ontario compared with 11 in 2011, 40 in Quebec compared with seven in 2011, 17 in British Columbia compared with two in 2011, 11 in Nova Scotia compared with four in 2011, 10 in New Brunswick compared with one in 2011, seven in Manitoba compared with one in 2011, and even four in Harper’s Alberta. It was, by any measure, an historic landslide. After the election, Harper resigned as leader of the Conservatives and Rona Ambrose, another MP from Alberta, took over as interim leader. Andrew Scheer, an MP from Saskatchewan notable for having been first elected to the House when he was 25 and having been elected Speaker when he was 32, the youngest in history, was elected leader in 2017, defeating Maxime Bernier, a  former cabinet member who subsequently left the party and formed the right-wing People’s Party

In calling an early election, Trudeau anticipated that two important developments in recent months would work to the advantage of the Liberals: First, after a slow start, Canada has done a better job of vaccinating its citizens than many other developed countries. Our World in Data reported that, as of Monday, election day, 69.5 percent of the Canadian population was fully vaccinated against Covid, compared with 65.2 percent in the UK, 61.4 percent in the European Union, and 54 percent in the U.S. Second, fueled by a large federal deficit equivalent to 11 percent of GDP last year and 8 percent this year, the Canadian economy is experiencing a strong rebound from last year’s contraction; the OECD predicts that, thanks to the fiscal stimulus, the decrease in Covid-related restrictions on economic activity, and strong external demand, GDP will increase by 6.1 percent this year and 3.8 percent next year.

On the other hand, at least two other factors reduced the likelihood of a Liberal majority, notwithstanding the success of the vaccination campaign and the economic recovery. For one thing, many Canadians objected to the idea that, in the midst of a pandemic and only two years after the previous election, they would be asked to go to the polls just because Trudeau wanted a parliamentary majority. It struck many as a self-indulgent move—and one that was not only self-indulgent but also both unnecessary, because the Liberal minority government had been able to function effectively with the support of the NDP and occasionally MPs of other parties on the budget and other major policy issues, and costly, because holding an election in the midst of another surge in infections would require, among other things, a complex and costly system of online and mail-in voting. (The cost of the election was reportedly more than C$600 million.) For another thing, the polls when Trudeau announced the election suggested that, while the Liberals might pick up a few seats, they would in all likelihood fall well short of a majority. They indicated the Liberals would get about 32 to 34 percent of the aggregate vote in the 338 ridings, roughly the same as the 33.1 percent they won in 2019, and might win 160 or 161 seats, more than the 157 they won in 2019, but still well short of the 170 required for a majority in the 338-seat House. Although not intended to be forecasts of the outcome, those polls turned out to provide exceptionally accurate predictions of what would happen more than a month later. (They also suggest, at least implicitly, that the election campaigns had little effect on the outcome.)

One indicator of the extent of opposition to holding an unnecessary and costly snap election in the midst of the continuing Covid crisis was the nearly record-low turnout. Elections Canada issued 1.25 million special ballot voting kits, of which roughly one million were returned. It’s still verifying the mailed-in ballots to make sure, for instance, that none came from individuals who also voted in person. For that reason, as of today it has still not been able to issue the final results of the election and has instead issued preliminary results indicating the share of the vote won by each party, the number of ridings which have been won by each party, and the number of ridings in which each party’s candidate is leading. But it has been able to issue nearly-complete results on turnout, and those data indicate that, including the returned mail-in ballots, turnout dropped to the second lowest level in any election since 1867: 61 percent, second only to that in the 2008 election (59 percent). In the 2019 election, turnout was 67 percent.

As of today, Liberals have been elected in 151 ridings and lead in 7 others—four of which are in Ontario, two of which are in British Columbia, and one is in Quebec—giving them (if they win the seven ridings in which they are leading) a total of 158 seats, a gain of one over the number they won in 2019. But they lost two seats in Nova Scotia and, even if they win all of the seats in which they are now leading, they will also end up losing two of their 35 seats in Quebec and one of their 79 seats in Ontario. On the other hand, they won two seats in Alberta, where they were shut out in 2019, and if they win the two seats in BC in which they’re now leading, they’ll end up winning 15 seats in that province, a gain of four.

The Conservatives have been elected in 119 ridings, a loss of two seats. They picked up one seat in Newfoundland, two in Nova Scotia, one in New Brunswick and one in Ontario, but those gains were more than offset by their loss of three of their 33 seats in Alberta and four of their 17 seats in British Columbia. While we don’t know at this point precisely why they picked up seats in the Atlantic provinces but lost seats in Alberta and BC, the regional distribution of gains and losses may reflect the combined effect of the Conservatives having chosen last year a leader from Ontario rather than from the Prairies or BC, O’Toole’s moderation in the campaign of his positions on a number of social and economic issues, the dissatisfaction of some Conservatives in western Canada with that moderation, and the defection of some of the dissatisfied Conservatives to Bernier’s right-wing People’s Party, which, although it won no seats, won 5 percent of the vote, a substantial increase over the 1.6 percent it won in 2019. Whatever the explanation, the Conservatives won 119 seats, two less than they won in 2019. But they will at least have the satisfaction of knowing that, even if they lost two seats and their share of the vote dropped from 34.3 percent in 2019 to 33.8 percent on Monday, they outpolled the Liberals, who received 32.5 percent of the vote.

Among the other parties, the Bloc Québécois, led by Yves-François Blanchet, which in 2019 won 32.4 percent of the vote in Quebec (7.6 percent of the national vote) and 32 of Quebec’s 78 seats in 2019, won roughly the same share of the vote in Quebec (32.1 percent) and in the country (7.7 percent). But yesterday it won its 33rd seat, Trois-Rivières, and if it wins Brome-Missisquoi, in which it is now leading, it will end up with 34 seats, a gain of two, at the expense of the Liberals, who, even if they win the seat in which they are now leading, will lose two of their 35 seats in the province.

The NDP, which won 17.7 percent of the vote compared with 16 percent in 2019, is on track to win 25 seats in the House, a gain of one seat. It lost its seat in Newfoundland and one of its six seats in Ontario. But it kept its seat in Quebec and its three seats in Manitoba, picked up a seat in Alberta, giving it two in that province, and picked up one seat and is leading in another in BC, which would give it 13 MPs from that province—a result that no doubt is at least in part a reflection of the regional support for Singh, who resides in Burnaby in BC.

Finally, given the challenges posed by climate change, the Greens had a surprisingly disappointing election. Their share of the national vote dropped from 6.6 percent in 2019 to 2.3 percent on Monday, and although they picked up a seat in Ontario, they lost their seat in New Brunswick and one of their two seats in BC, leaving them with two seats in the House instead of the three they won in 2019. And their leader, Annamie Paul, lost her race for Toronto Centre.

After all is said and done, Canada today is about where it was on August 15, when Trudeau announced the snap election. Assuming they win all the seats in which they’re now leading, the Liberals will have 158 seats in the House, a gain of one, and Trudeau will be, as he was then, prime minister of a Liberal minority government. Same result—and it only cost the taxpayers C$600 million.

David R. Cameron is a former member of the MacMillan Center’s Canadian Studies Committee. With Richard Albert, a former Canadian Bicentennial Visiting Professor at the Center, he co-edited Canada in the World: Comparative Perspectives on the Canadian Constitution (Cambridge, 2017).