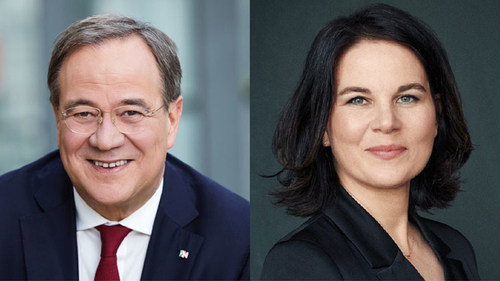 German voters will go to the polls on September 26 to elect the Bundestag. For most parties, the party leader is its presumed chancellor candidate in the election campaign. But in the case of the German Christian Democratic Union (CDU) and its Bavarian sister party, the Christian Social Union (CSU), which will be contesting an election for the first time since 2005 in which Angela Merkel isn’t their chancellor candidate, and in the case of the German Greens, which have two leaders, the situation was potentially more complicated.

On Monday, the Greens announced that Annalena Baerbock, who has represented the state of Brandenburg in the Bundestag since 2013 and has been co-leader of the Greens with Robert Habeck since 2018, will be their chancellor candidate. Her selection was not contested and indeed was a foregone conclusion, largely because, while she has served in the Bundestag since 2013, Habeck, who served in the Landtag of Schleswig-Holstein in 2009-12 and in that state’s government in 2012-18, no longer holds a political office.

The same cannot be said of the CDU-CSU decision. Indeed, over the past two weeks, German politics has been dominated by the sometimes-heated arguments, both behind closed doors and in the press, between members and leaders of the CDU and CSU over whether Armin Laschet, who has been the minister president of North Rhine-Westphalia since 2017 and was elected national CDU leader in January, or Markus Söder, who has been the minister president of Bavaria since 2018 and the CSU leader since 2019, should be their chancellor candidate.

But these are not ordinary times, and as Germany continues to struggle to beat back the third wave of Covid infections, the CDU has experienced significant setbacks in a number of recent state elections—most recently, last month in Baden-Württemberg and Rhineland-Palatinate—as well as a precipitous drop in public support in the polls since Laschet’s election as party leader in January. Faced with those election setbacks and losses of public support, there are many in the CDU and the CSU who believe Söder would be the stronger chancellor candidate. Nevertheless, last Monday, the CDU executive committee reached a preliminary agreement in favor of Laschet, for whom there was, according to the party’s general secretary, “broad support.” Söder, saying the support of the CDU state leaders was not a sufficient mandate, called upon the CDU leadership to “go wider into the party.”

Yesterday, after a seven-hour online meeting of the CDU’s national board Monday evening that ran into the early hours of Tuesday to discuss and vote on the executive committee’s preliminary decision, 31 members of the board voted for Laschet as the CDU-CSU chancellor candidate while nine voted for Söder and 6 abstained. Yesterday, at a press conference in Munich, Söder gracefully accepted the decision, saying, “The die is cast. Armin Laschet will be the CDU/CSU’s candidate for chancellor. My word, which I have given, stands. The CDU met yesterday and decided. We accept that, and I respect that. I called Armin Laschet and congratulated him. I told him that we as the CSU accept it. We offered him our full support. We will support him without a grudge, support him with all our strength. We do not want division, but a united community.”

The CDU and CSU now clearly have their work cut out for them. More than a half-dozen polls from late March through this week report that, when voters are asked who they support as chancellor between Laschet, Olaf Scholz of the Social Democratic Party (SPD), the current vice chancellor and minister of finance, and Baerbock, Laschet runs third behind the other two. And Baerbock leads both!