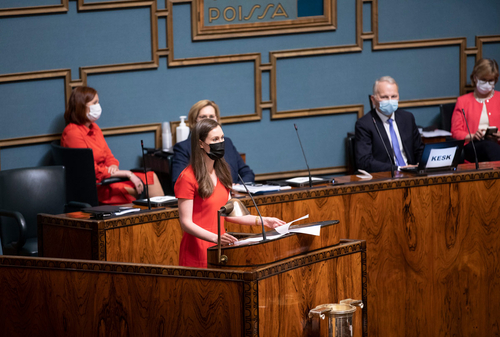 On Tuesday, a large collective sigh of relief could be heard across Europe; Finland’s parliament had approved, by the narrowest of margins, the EU’s proposed financing of its €750 billion recovery plan. The plan, which involves borrowing up to €750 billion on the capital markets that would then be distributed as grants or loans to the member states to assist them in recovering from the economic effects of the Covid-19 pandemic, requires the unanimous approval of the financing arrangement by all 27 member states. If Finland had rejected the arrangement, the plan would be dead.

The plan, agreed last July by the heads of state or government of the member states, meeting as the European Council, would distribute €390 billion in grants and €360 billion in loans to the member states through a new Recovery and Resilience Facility to support investments and reforms essential for a sustainable recovery and resilient future. The funds would be distributed through the EU’s seven-year Multiannual Fiscal Framework (i.e., its budget) for 2021-27 and would be repaid over 30 years beginning in 2028.

In order to provide the revenues necessary to fund the MFF and service the €750 billion of debt, in December the Council of Ministers approved an Own Resources Decision (ORD). The ORD permanently increases the maximum level of resources that can be called from the member states (the “own resources ceiling”) from 1.2 percent of EU Gross National Income to 1.4 percent, and it provides for a temporary further increase in the ceiling of 0.6 percent of EU GNI to be devoted exclusively to the financing of the recovery plan. It also introduced a national contribution linked to non-recycled plastic packaging waste, the first new EU own resource created since 1988.

As noted above, the ORD must be approved by all 27 member states in order for the EU to go to the capital markets and obtain, and subsequently service, the €750 billion. After a protracted and at times heated parliamentary debate that featured, among other things, a week-long filibuster last week, the Finnish parliament was scheduled to vote on the ORD on Tuesday, and there was a real possibility the parliament would not approve it. If that happened, the EU would not be able to proceed with the recovery plan, at least as currently formulated. The EU could continue to fund, on a month-by-month basis, its current budget with its current revenues until a new ORD, without the provisions covering the servicing of the debt for the recovery plan, could be approved to fund the MFF. But without approval of the provisions pertaining to the debt, the EU would not be able to go to the markets and borrow the €750 billion.

The current Finnish government headed by Prime Minister Sanna Marin is a five-party coalition that includes the Social Democratic Party, the center-right Centre Party, the Green League, the Left Alliance, and the Swedish People’s Party. The five parties hold 117 of the 200 seats in the parliament. The two major opposition parties are the conservative National Coalition and the Finns Party, the xenophobic, euroskeptic, populist right-wing party. There is also a small Christian Democratic party.

In late April, the parliament’s Constitutional Law Committee ruled by a 9-8 vote that, as the Finns loudly insisted, the ORD must be approved by a two-thirds majority of the parliament rather than a simple majority. That would mean the ORD would have to be supported by 133 of the 200 members of parliament in order to be approved and could be defeated by 68 members. With 117 members, the five parties of the government were 16 votes short of the required two-thirds majority. And not all of the 117 were certain to vote for the ORD; a few members of the Centre Party had supported the Constitutional Law Committee’s decision to require a two-thirds majority and at least two members had indicated they would vote against the ORD. Meanwhile, the Finns and the National Coalition each have 38 members—enough to deprive the government of a two-thirds majority, provided the members of both parties were willing to vote with the other party and provided, in particular, the National Coalition members, when faced with a choice between voting for the ORD and in so doing supporting the government or voting against it and in so doing aligning with the Finns, chose the latter option. But while it was highly unlikely that any member of the virulently-euroskeptic Finns would vote in favor of the ORD, it was quite possible that at least some members of the National Coalition, which supports European integration, would vote in favor of the ORD, if only because the fate of the EU’s recovery plan depended on the ORD being approved by the Finnish parliament. On the other hand, with the Finns leading the attack on the ORD and moving up in the polls, and the National Coalition in the midst of an intensive competition with the Finns for votes in the upcoming municipal elections in June, it wasn’t at all clear that enough National Coalition members would vote for the ORD to give it the 133 votes required for a two-thirds majority.

On Tuesday, the parliament voted and, surprising many, approved the ORD. It did so by the narrowest of margins—134 in favor and 57 against, with two abstentions and six members absent. The combination of the government playing hardball with the members of the five parties in the coalition—most notably, those of the Centre Party who were wavering in their support—and a number of National Coalition members who, faced with a hard choice between voting with the Finns against the ORD or voting with the government for the ORD, preferred the latter, gave the government a victory by the narrowest of margins. It could claim, notwithstanding a few abstentions and absences, that more than two-thirds of the 200-seat parliament had voted in favor of the ORD. But it was a close call—a very close call.

There are still five states—Austria, Hungary, the Netherlands, Poland and Romania—that must ratify the ORD in order for the EU to take on the €750 billion of debt that will fund the recovery plan. Given their strenuous resistance to the effort last fall to introduce some degree of rule-of-law conditionality to budgetary and recovery-related disbursements, one might anticipate the ORD would encounter significant opposition in Hungary and Poland. However, both governments have already signaled, at least implicitly, their support for the ORD by submitting the recovery and resilience plans that must be reviewed and approved by the Commission and Council in order to receive grants and loans through the Recovery and Resilience Facility. Hungary has requested €7.2 billion in grants and Poland has requested €23.9 billion in grants and €12.1 billion in loans. They certainly have no intention at this point of walking away from more than €30 billion in grants. Furthermore, both governments have secure majorities in favor of the ORD. In Hungary, Fidesz, the party founded and headed by Prime Minister Viktor Orbán, holds 117 of the 198 seats in the National Assembly. And in Poland, where the small United Poland party, one of the three parties in the governing coalition headed by Prime Minister Mateusz Morawiecki and dominated by Jarosław Kaczyński’s Law and Justice Party, threatened to block approval of the ODR, last month the Left party agreed to support the ODR in exchange for additional spending on public housing and hospitals and the right of local government leaders to participate in decisions regarding spending.

If the ODR were to encounter substantial opposition in any of the states that have not yet ratified it, it would most likely happen in the Netherlands and Austria. The leaders of those countries, Prime Minister Mark Rutte and Chancellor Sebastian Kurz, were prominent members,  along with the leaders of Denmark and Sweden, of the so-called “frugal four” that sought, in the series of meetings last spring and summer that produced the recovery plan, to reduce the overall amount of assistance available to the member states, reduce the amount to be distributed as grants, increase the amount to be distributed as loans, and include tough performance conditions for those receiving loans.

Rutte and Kurz are both currently in tenuous positions that casts some degree of uncertainty over whether either country will approve the ODR. After the March election in the Netherlands, a motion of no confidence in Rutte was brought in the Dutch parliament on the grounds that he didn’t tell the truth in response to a question about a comment he was alleged to have made in the course of post-election coalition talks about finding a position for an individual. After initially denying he had made the comment, Rutte claimed he had forgotten he made the comment. The motion wasn’t approved but a subsequent motion of censure was approved, which obviously has complicated the negotiations, still ongoing, about the formation of a new government. And last week, Kurz announced that he expected to be charged by prosecutors for misleading a special parliamentary committee investigating high-level corruption. Whether he will be forced to resign remains to be seen. The situations in which Rutte and Kurz now find themselves may limit their inclination and ability to oppose ratification of the ODR. On the other hand, their current situations may have weakened their ability to steer any legislation through their parliaments, including legislation that would ratify the ODR.

But even if all of the EU member states in due course ratify the ODR, there will still be one large question mark hanging over the ORD and thus over the EU’s plan to borrow €750 billion to fund €390 billion in grants and €360 in loans to the member states. Last month, while rejecting an application for a preliminary injunction preventing Germany’s ratification of the ORD, the German Constitutional Court nevertheless said the constitutional complaint “is not clearly unfounded” and that it will conduct a thorough examination of the issues raised by the applicants. That examination will undoubtedly take some time—perhaps even several years if, as seems likely, the issue is referred at some point to the European Court of Justice. The German Court will decide whatever it decides whenever it does so. But in the meantime, the ORD will in all likelihood, and notwithstanding the recent complications in the Netherlands and Austria, soon be ratified by all of the member states, the EU will begin the process of raising and distributing the €750 billion in grants and loans to the states, and the states will begin making the investments and reforms that will ensure their sustainable recovery and resilient future.