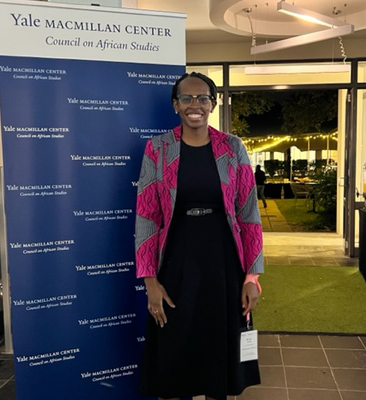 The Council on African Studies (CAS) and the Fox International Fellowship participated in the African Studies of Africa Association’s (ASAA) biennial conference, which took place at the University of Cape Town April 11-16. Under the conference theme Africa and the Human: Old questions, new imaginaries, the CAS and Fox team hosted a panel entitled ‘Next-Generation Africa: Creating Solutions for the Global Community.’ Bringing together African early-career researchers and practitioners, the panel explored what lessons can be learned from comparisons with other countries and what methods are best suited to accommodate locally sustainable futures, touching upon diverse themes including policing, business leadership, and technology innovation. Chaired by CAS Program Coordinator Norah Langat, panelists included Adwoa Owusuaa Bobie from the University of Ghana who spoke on the role of mentorship in building a successful fashion industry in Ghana. DaQuan Lawrence from Howard University focused on ‘Humanity, Africanity, and the global political economy: will Africans contribute to the Fourth Industrial Revolution?’ Fox alum Benson Chinedu Olubguo, who is Nigeria country director for the NGO Center for Civilians in Conflict, addressed ‘Policing Blackness and Police Accountability in Africa: Examining the relationship between Blacklives Matter and EndSARS Movements.’

In addition to the CAS-Fox specific panel, The Council supported participation at ASAA by CAS Graduate Affiliate and History PhD candidate Marius Kothor, who participated in the panel session Revisiting the Bargain of Collaboration in Colonial and Post-Colonial Africa. Marius examined the experience of Togolese women merchants, the powerful Nana Benz, and the legacy of the first elected Africa woman mayor in independent Africa, Marie Sivomey, in her paper “‘They Gave us a Big Market, and they Appointed a Woman to Administer it’: Marie Sivomey, Lomé’s Merchants, and the Rise of Military Rule in Togo, 1967–1974.”

Fox Fellowship also supported two Fox alums to present at the conference. Tammy Wilks (AY 20-21) from the University of Cape Towns, participated in the panel (Re)Conceptualisations of the ‘Human’ in Africa Across Disciplinary Boundaries: Methods, Possibilities, and Provincialisation/Universality. Tammy’s paper ‘Humanizing Fieldwork in Africa,’ explored the experience of African scholars living and conducting research in other African countries. According to Tammy, “I critically reflected on how conducting research in Kenya as a South African necessarily complicated my assumptions and parochialisms about what counts as human and pluralized my understanding of human flourishing.” Lwando Scott (AY 13-14), a Next Generation Scholar at the Centre for Humanities Research at the University of the Western Cape, convened a panel entitled Transformative Constitutionalism: What “Human” is Imagined in the Human Rights Contained in the South African Constitution? Lwando contributed a paper entitled “Queer Africans and the question of the Human.” Author Rinaldo Walcott issued a call to rethink the post-Enlightenment conception of the human, arguing that the only way to undo anti-Black/anti-African logics of the global order is by reconstituting the human. Lwando stated that by engaging Walcott’s arguments, “I wondered about what reconstituting the human would mean for queer Africans. How is the figure of the African queer articulated in a new humanism?”

The ASAA was launched in 2013 to promote Africa’s own specific contributions to the advancement of knowledge about the peoples and cultures of Africa and the Diaspora. CAS is an institutional member of the organization and continually seeks opportunities to engage with it, in keeping with our council goal of forming networks on the continent. We prioritize attending ASAA’s biennial conference as an opportunity to dialogue with pertinent issues from the local African knowledge perspective, and to seek potential collaborations with African colleagues that ideally will result in a more expansive perspective back here on campus and in Yale classrooms. CAS looks forward to continuing our regular attendance at ASAA and formulating a panel for the next conference in 2024 around one of our strategic initiatives, charting pathways for the practical application of African knowledge to address current and emergent problems in the continent.