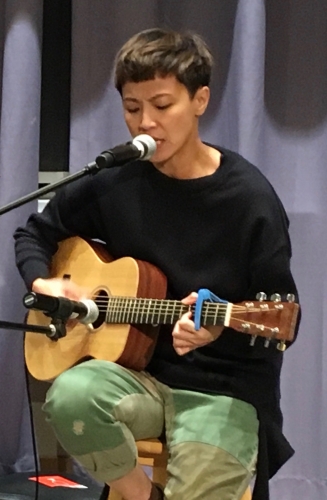 China’s “one country, two systems” formula since 1997 has made Hong Kong a unique political space with its own cultural dynamics. Regarded as the first mainstream Canto-pop singer in Hong Kong to come out as homosexual, Denise Ho, or HOCC (何韻詩), is a high-profile LGBT activist. She has also become an icon of political defiance in Hong Kong in a time when mainland China is intensifying its efforts against dissent. As a result of her support for the pro-democracy Umbrella Movement in 2014, she was banned from performing in China. Losing the China market did not deter her resolve. She turned independent as a singer. HOCC has been listed on BBC’s “one hundred influential and inspiration women of 2016.” On April 28, the Council on East Asian Studies and the Office of LGBTQ Resources co-sponsored a performance and conversation with HOCC. “Asian Pop Spectacle & New Political Space” was moderated by Helen Siu, a Professor of Anthropology at Yale.

The presentation was in three parts, each featuring a video compilation of HOCC’s work and a subsequent discussion. The first video set featured HOCC’s two early musical productions, both contemporary renditions of classic Chinese literary canons. The 2005 music video (based on the star-crossed Butterfly Lovers) highlighted repressed romance between two young men. The 2012 production of Jia Pao Yu (based on Dream of the Red Chamber) lamented the innocence of youth crushed by tradition. HOCC used them to protest against social conventions and to challenge gender norms. For her, it was “a way that I could express all the feelings I felt inside that I couldn’t express outside.”

Though she produced the two pieces before she came out, she said, “I think the whole Hong Kong society knew… They had no doubts about me being straight or gay.” When asked by journalists about her romantic life, she “found ways to answer them indirectly… the word boyfriend never came out of my mouth.”

HOCC attributes two main reasons to why she decided to come out in 2013. The first was the decision of another Hong Kong singer, Anthony Wong. She remembered how it shocked Hong Kong society. “Never ever did a male singer announce with his own words that he was gay.” The second moment was in 2012, when a member of the Hong Kong Legislative Council tried to start a public survey about LGBT issues and could not get it passed. HOCC recalled her frustration, noting that the survey was simply asking the public about their views on LGBT rights.

“There were no female singers who came out before,” she said. Because HOCC still had about 50 shows lined up in China, she had to consider that coming out might cause her to be shunned in China. “At the end, I chose to come out because I thought if I had to choose between what I think I have to do and between doing shows… the part of the social responsibility weights more for me.”

HOCC criticized the common perception in many Asian communities where “when they know you’re gay, they just think you love to dress up as a man.” She noted how every time she wore a dress, the press went crazy, even though she had worn dresses in the past, especially when she modeled for French cosmetics and fashion companies. “In Hong Kong, they just cannot understand… they just think that if you are a lesbian, that you want to grow a mustache.”

HOCC said that gender was not a barrier for her. “I can be whatever I want to be. At the end of the day, I’m a human being, and I have the masculine side and I have the feminine side.” Still, to change the minds of people, “it will take time.”

The second set of videos showed clips of HOCC’s free street concert last June after Lancôme, the French cosmetics giant, dropped its sponsorship of HOCC’s promotional concert, allegedly due to pressure from the Chinese government. The video also included clips of her 2015 “Reimagine” concert, which contained a song featuring participants of the Umbrella Movement on center stage.

In the video, HOCC noted that the Umbrella Movement was a result of a sense that mainland China was infringing more and more on the “one country, two systems” formula in Hong Kong. In the BBC interview in 2016, she explained why she decided to become an independent singer. “I had to find ways to continue to survive in this entertainment business where everyone thought that that was the end of my career.”

“We have to stand up for these issues because we can, because some people just cannot… we have to fight for basic human rights, which is the freedom of speech and the freedom of thought,” she said in the video.

Siu noted that at a Yale Law School lecture, lawyer and legislator Margaret Ng once commented that the prospect for Hong Kong after 1997 (when it became a special administrative region of China) was like the story of David and Goliath, but without a sling. Siu then asked HOCC, jokingly, “where is your sling?”

HOCC responded that Hong Kongers “have to be really… creative and really crafty with our hands so that we can build our own slings.”

She noted that she has hardly received any global corporate offers since the Lancôme incident. Instead of relying on them, HOCC and her team reached out to local shop owners who also faced challenges in a difficult environment in Hong Kong. She was very touched that her concert at the Hong Kong Coliseum was supported by 48,000 fans and three hundred small businesses.

The last set of videos showed more of HOCC’s performances from her recent “Dear Friend” concert. The songs stressed empathy, mutual respect, collective resolve, and hope for a more accepting society. She also thanked the sponsors who crowdfunded her return to the stage. The set ended with “The Beauty of We,” an emotional performance for her and for the Hong Kongers who were deeply attached to the place they called home.

After the video program, HOCC performed with Hakgwai Lau, a handpan and didgeridoo artist.  Finally, she took questions from the audience. When asked why she decided not to go into politics after the Umbrella Movement although many people pushed her to do, she said that she seriously considered it but realized that she was more suited for the arts. “In order to overcome the difficulties we are facing right now, each person must be doing what they are most good at.” HOCC noted that though there are many people in the political scene who are trying to make a difference, there are not many in the cultural scene. In other words, she felt that she could have a bigger impact as a singer and public performer.

Another question inquired about the intersectionality between pro-democracy activism and LGBT activism. HOCC responded, “it is quite difficult at this time to push for LGBT rights in Hong Kong because we just don’t have a system that listens to us… we try, but we know we are just speaking to the wall.” She emphasized the importance of the pro-democracy movement, saying “we know that if we don’t have the system that listens to the people, it is in vain to fight for the rights of any minorities.”

Regarding her future plans, HOCC hinted that she is working on projects aimed at building a community with the technical and institutional resources needed by independent artists in Hong Kong.