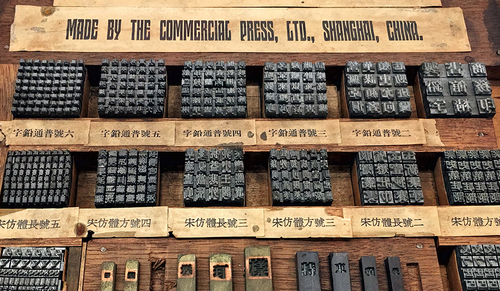 In June 1849, the Yale College librarian received a three-month-old letter from Canton, China, informing him that the sender, an American missionary printer named Samuel Wells Williams, had purchased six Chinese classical texts for the Yale library. The handstitched texts, about 90 volumes in all, arrived in August at a cost of $9.50 plus an extra dollar for freight.

A new exhibition at Sterling Library, “From East to West: The History of the Chinese Collection at Yale 1849-2019,” illuminates the 170-year history of a collection that is intertwined with the growth of Yale Library and even influenced the architectural decoration of Sterling Memorial Library. 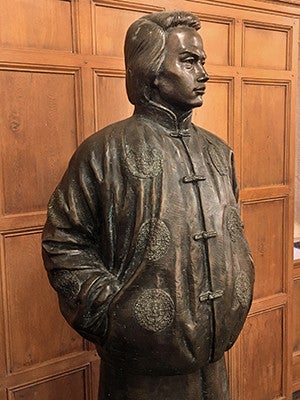 Among the most influential figures in building this collection was Yung Wing, who in 1854 became the first Chinese citizen to graduate from a major American university. As a student, Yung Wing worked as assistant librarian for the Brothers in Unity, one of Yale’s undergraduate secret societies, and donated several Chinese books to the group’s library, including a Chinese translation of the Book of Genesis, which is on display in the exhibition. In 1877, Yung Wing offered the library 1,280 volumes from his personal collection, contingent on the establishment of a professorship for Chinese language and literature. Samuel Wells Williams was appointed as the inaugural professor.

Yung Wing gave a second major gift of books in 1911, shortly before his death. Today lines of Chinese script, drawn from one of the books he donated, can be found carved among other ancient scripts on the exterior of Sterling Memorial Library. A statue of Yung Wing, which usually presides over Sterling Library’s Linonia & Brothers Reading Room, is in the exhibition.

Another key figure in the collection’s history was Addison Van Name, university librarian from 1865 to 1905, who maintained a scholarly interest in linguistics. In 1871, Van Name began teaching a course with Chinese and Japanese elements, making Yale the first university to offer East Asian language instruction. Van Name donated his collection of Chinese books to the library, including rare editions supporting study of the Southern Min dialect. The stonework in the nave of Sterling Memorial Library includes a carved image of Van Name, Yale’s longest serving university librarian.

In the 1960s and 1970s, an academic couple played important roles in the collection. Professors Mary Clabaugh Wright and Arthur Frederick Wright traveled extensively in Japan and China and joined Yale’s history department in 1959. Mary Wright, a leading scholar of modern China, later became Yale’s first female full professor on the Faculty of Arts and Sciences. Her sponsorship and cultivation of Jen Yu-wen, a leading scholar of the Taiping Revolutionary Movement, led him eventually to donate his extensive research collection to Yale. Arthur Wright, a noted historian of Chinese Buddhism, was the inaugural chair of the Council on East Asian Studies. Books donated by the Wrights in 1962 and by their family in 1977 added nearly 7,000 volumes to the collection. 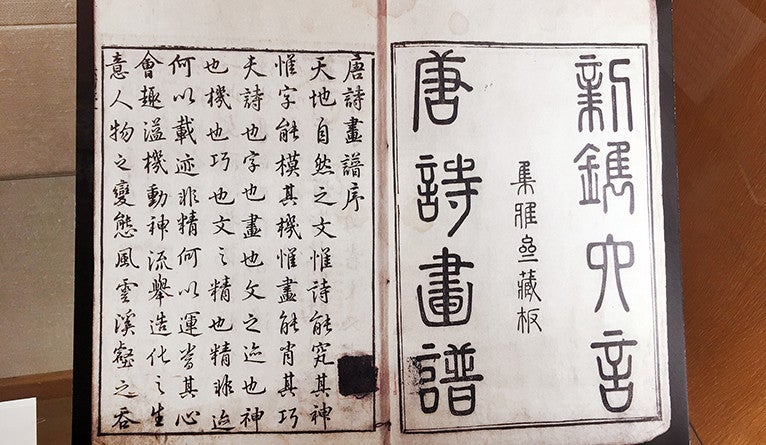 Many Yale faculty acquired books during their travels, donated personal collections, and served as collection curators. Before joining the Yale faculty, Samuel Wells Williams spent many years as a diplomat building contacts and relationships that helped him build the collection. Samuel’s son, Frederick Wells Williams, was born in Macao, lived in Beijing for the first 12 years of his life, and graduated from Yale in 1879. He succeeded his father as professor of Chinese language and literature from 1893 to 1925 and shaped the collection by donating his and his father’s books.

The exhibition grew out of an introduction Meng wrote for “Pre-Republican Chinese Books and Manuscripts at the Yale University Library,” a book recently published in China. To identify the collection’s historical milestones, Meng searched for clues in Yale’s Manuscripts and Archives department.

“They saved everything,” Meng said. “Many other universities don’t have these detailed records of their collections.”

The quality of the archives allowed Meng to reconstruct the growth of the collection, bringing history alive not only through individual books, but also through correspondence, invoices, collectors’ personal bookplates affixed to the volumes they donated, and the elegant handwriting of faculty, librarians, and collectors in both English and Chinese.

“Samuel Wells Williams’ letter started the process,” Meng said. “In the early years, the library was getting donations from Yale’s friends and alumni at that time, but there was no systematic plan. You didn’t know what you would get.”

Still, Williams had — and communicated — a kind of blueprint for the collection. Seven years after Williams died, Francis Eben Woodruff, an 1864 Yale graduate working for the Chinese Imperial Customs Service, wrote to tell Van Name he was sending a set of books considered the most important primary source for studying Chinese history.

“Apparently, Samuel Wells Williams had told Woodruff, ‘You need to find this set for Yale students and faculty,’” Meng said. 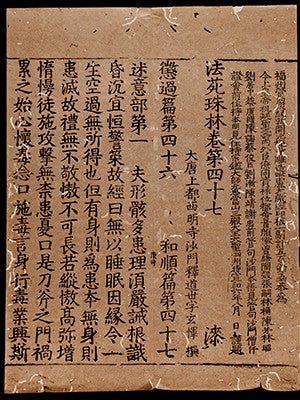 Although the world’s first movable type printing technique was invented in China around 1040, a less expensive woodblock technique dominated mass printing from the 9th century until the early 20th century. Wooden blocks were carved with words and images, inked, and then pressed with paper to transfer the image. Yale Library’s oldest block-printed Chinese book, a Buddhist sutra shown here, was printed in 1124. (Beinecke Rare Book and Manuscript Library)

Today, the collection comprises about 560,000 print volumes and a growing array of electronic resources. It supports the Chinese academic programs of the Council on East Asian Studies and the Department of East Asian Languages and Literatures, as well as Chinese studies concentrations for degree programs in the social sciences, arts, and humanities. The collection’s oldest book, now held in the Beinecke Rare Book and Manuscript Library, is a Buddhist sutra from the Northern Song Dynasty (962-1126). The oldest block print edition is also a Buddhist sutra, dating to 1124.

“The Yale collection is both modern, contemporary, and ancient. It runs from rare books to databases,” Meng said. “We work with undergraduates, graduate students, and faculty. It’s the whole package, and it’s pretty exciting.”

Cheng Li, a graduate student in East Asian Languages and Literature, helped polish some of the exhibition’s Chinese translation.

“Our library boasts a vast range of invaluable China collections, which is definitely a great resource for promoting academic research and the public’s knowledge of the association between China and the U.S.,” he said. “As a Ph.D. student, this collection also inspires me to further understand that I am standing on the shoulders of these great librarians and professors. I hope that I can make full use of the sources for my own research in the coming years at Yale.”

In the Memorabilia Room exhibition, several cases chronicle the evolution of Chinese book print culture from woodblock techniques to moveable type and lithographs. In other cases, records and correspondence show the communications, currency, and shipping challenges of finding and acquiring books in China, not only in the 19th century but also through the Cold War. Even now, Meng’s occasional buying trips to China entail a packed schedule of meetings to build relationships, identify items that will fit into the collection, and negotiate terms of sale. 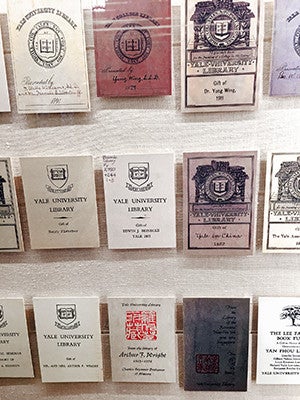 A display of bookplates shows the wide range of Yale students, faculty, and friends who gave personal or family collections to the Chinese Collection.

“What we acquire depends on faculty’s needs or student research needs, but from time to time, I notice something that other people didn’t notice, or that faculty don’t know about,” he said.  “We maintain very good relations with vendors so they can find the materials we need.”

Some acquisition challenges have been alleviated by digital resources, he said.

“In the 21st century, the collection is in transition from a traditional, print-dominant collection to a more dual role of print and electronic resources,” Meng said.  “We collect materials from China, Taiwan, Hong Kong, and Macao. In all these regions, as in the U.S., we have seen over the past two decades the development of electronic databases of traditional texts, historical archives, and socioeconomic data, and the ability to do full-text searches.”

Whether the holdings are print or digital, the collection’s mission remains the same and can be summed up by an epigraph on view in the exhibition. The last case holds a scroll presented to the East Asia Library in 2007 by a calligrapher in China. A translation of the Chinese characters reads: “Accumulate scholarship, preserve treasures.”

The “East to West exhibition” is sponsored by Yale University Library and the Council on East Asian Studies at Yale. It will be on view through Feb. 21. There will be an opening reception on Thursday, Nov. 7, 4-6 p.m., in the library’s Memorabilia Room.

Written by Bess Connolly for YaleNews.