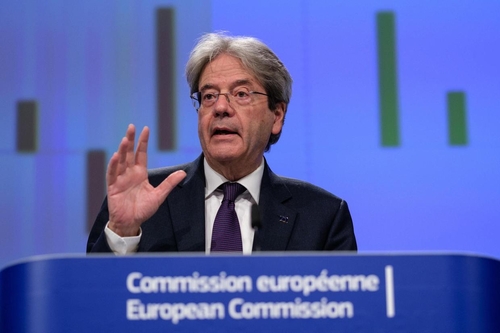 Meanwhile, as the recovery picks up some speed, the EU continues its efforts to transform into reality the €750 billion recovery plan approved last summer by the European Council, the heads of state or government of the 27 member states. The plan, proposed by the Commission at the request of the leaders, involves the distribution of €750 billion in 2018 prices—€806.9 billion in current prices—in grants and loans to the member states to support the recovery of their economies and increase their resilience in the face of future crises. The plan, labeled Next Generation EU (NGEU), involves the Commission borrowing the funds on the capital markets over the next five years and distributing them to the member states through the EU’s Multiannual Fiscal Framework, its seven-year €1.074 trillion budget for 2021-27. Up to €390 in 2018 prices—€421.1 billion in current prices—will be distributed as grants and up to €360 billion in 2018 prices—€385.8 billion in current prices—will be distributed as loans.

The NGEU consists of seven programs, all of which aim to support the recovery of the economies of the member states and increase their resilience in the face of future crises. The largest program by far is a new Recovery and Resilience Facility (RRF) through which the member states may receive up to €338 billion in grants and €385.8 billion in loans. The other six programs involve a total of €83.1 in grants. 70 percent of the RRF funds are to be committed this year and next year with the remaining 30 percent committed in 2023. The regulation establishing the RRF identifies six broad areas of policy for which RRF funds can be used to support investments and reforms: those involving the green transition; digital transformation; smart, sustainable and inclusive growth including economic cohesion and employment; social and territorial cohesion; health and economic, social and institutional resilience; and policies for the next generation, such as education and training in skills for children and youth.

The RRF funds will be distributed on the basis of recovery and resilience plans submitted to the Commission and, if approved by Commission, approved by the Council. As of today, 25 of the 27 member states—all but Bulgaria and the Netherlands—have submitted recovery and resilience plans to the Commission. Taken together, the 25 states have requested a total of €331.5 billion in grants and €166 billion in loans. The largest requests for grants came from Spain (€69.5 billion), Italy (€68.9 billion), France (€40.9 billion), Germany (€27.9 billion), Poland (€23.9 billion), Greece (€17.8 billion), Romania (€14.3 billion), and Portugal (€13.9 billion). The largest requests for loans came from Italy (€122.6 billion), Romania (€15 billion), Greece (€12.7 billion), and Portugal (€2.7 billion). As of today, the Commission has approved and submitted proposals to the Council for implementing decisions for 18 of the 25 plans, and the Council has adopted implementing decisions for 16 of the 18—those submitted by Austria, Belgium, Croatia, Cyprus, Denmark, France, Germany, Greece, Italy, Latvia, Lithuania, Luxembourg, Portugal, Slovakia, Slovenia and Spain.

In June, the Commission announced it planned to raise €800 billion in the financial markets through 2026 and planned to sell €80 billion of long-term bonds and several tens of billions of short-term bills by the end of the year to cover initial payments of grants and loans to the member states. On June 15, it sold €20 billion of 10-year bonds. On June 29, it sold €9 billion in 5-year bonds and €6 billion in 30-year bonds. And on July 13, it sold €10 billion in 20-year bonds. Not surprisingly, the sales were heavily oversubscribed. Today, the Commission started disbursing RRF funds, with “pre-financing” disbursements equivalent to 13 percent of the member state’s allocation going to Belgium, Luxembourg and Portugal. In its July forecast, the Commission estimated that, once distributed to the member states and deployed by them, the RRF funds will generate additional growth equivalent to 1.2 percent of the EU’s 2019 GDP.

When fully disbursed and deployed over the next five years, the RRF funds will undoubtedly have a significant and enduing impact on the ability of the EU economy to not only recover from the effects of the pandemic but to be more resilient in the face of future economic crises. But it’s nevertheless important to note that the strengthening recovery now underway is attributable to other factors than the EU’s €750 billion recovery plan. One important factor was the activation in March 2020 of the “general escape clause” from the EU’s fiscal rules pertaining to the size of the government deficit, relative to GDP, when there is a “generalized crisis” caused by a “severe economic downturn” in the euro area or, more broadly, the EU. The clause, the result of a 2011 reform of the Stability and Growth Pact, allowed the states to substantially increase their deficits as the crisis unfolded, and many of them did so – most notably, Spain, Italy, France and others, including Germany.

Nevertheless, that said, the recovery is still very much a work-in-progress and there is a good distance still to go to make up the economic ground lost over the last eighteen months. The RRF funds, which today started to flow to the member states, will no doubt provide an important and much-needed additional stimulus to the recovery now underway.