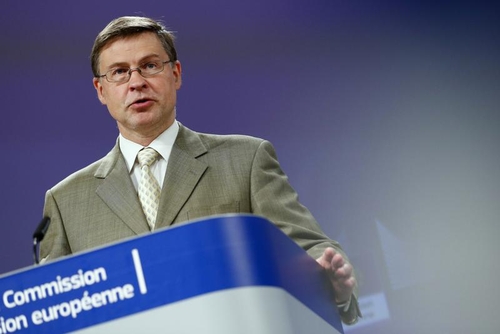 The NGEU consists of seven programs, all of which aim to support the recovery of the economies of the member states and increase their resilience in the face of future crises. The largest program by far is a new Recovery and Resilience Facility (RRF) through which the member states may receive up to €312.5 billion in 2018 prices—€338 billion in current prices—in grants and €360 billion in 2018 prices—€385.8 billion in current prices—in loans. The other six programs involve a total of €77.5 billion in 2018 prices—€83.1 billion in current prices—in grants. 70 percent of the RRF funds are to be committed this year and next year with the remaining 30 percent committed in 2023. The 59-page regulation establishing the RRF identifies six broad areas of policy for which the RRF can be used to support investments and reforms: those involving the green transition; digital transformation; smart, sustainable and inclusive growth including economic cohesion and employment; social and territorial cohesion; health and economic, social and institutional resilience; and policies for the next generation, such as education and training in skills for children and youth.

As of today, the Commission has completed its assessment of 16 of the 24 plans that have been submitted thus far. Based on a number of criteria, the Commission has given all 16 a strong overall assessment and has prepared proposals for implementing decisions by the Council based on the assessments. Other than a few relatively small adjustments in the amount requested for grants—for example, France will get €39.4 billion instead of €40.9 billion and Austria will get €3.5 billion instead of €4.5 billion—the assessments didn’t alter the initial amounts requested. In addition to the French and Austrian plans, the Commission has proposed implementing decisions for the plans submitted by Belgium, Croatia, Cyprus, Denmark, Germany, Greece, Italy, Latvia, Lithuania, Luxembourg, Portugal, Slovakia, Slovenia and Spain.

Last month, the Commission announced it would start raising the funds needed to finance the recovery plan. It said it plans to issue around €80 billion of long-term bonds this year, in addition to several tens of billions of short-term bills to cover the financing requirements. The exact amount of bonds and bills will depend on the precise funding needs and the Commission will revisit its estimate in September, with an eye to raising all of the funds needed to cover the grants and loans under the RRF in the second half of the year. On July 4, the Commission raised €20 billion via a ten-year bond, which was the largest-ever institutional bond issued, the largest-ever single-tranche transaction, and the largest amount the EU has ever raised in a single transaction. Reflecting the extraordinary demand in the financial markets for EU debt, it was oversubscribed seven-fold.

The EU hasn’t experienced rates of growth in the range of 4.5 to 4.8 since the 1970s. The fact that it may achieve rates of growth in that range this year and next is no doubt in part a reflection—and consequence—of the magnitude of the economic downturn that occurred last year. But to a considerable extent it is also the consequence of an obscure reform of the EU’s Stability and Growth Pact that was enacted in 2011, after the economic and financial crisis, and implemented for the first time in March 2020, as the magnitude of the adverse economic consequences of the Covid-19 pandemic became apparent. The reform provides for the activation of a ‘general escape clause’ from the EU’s fiscal rules pertaining to the size of government deficits and debt when there is a ‘generalized crisis’ caused by a ‘severe economic downturn’ of the euro area or EU. In March 2020, the Commission proposed to the Economic and Financial Affairs Council that the ‘general escape clause’ be activated for the first time. Three days later, the Council approved the proposal.

The more than €700 billion in RRF grants and loans that will be deployed by the member states once their recovery and resilience plans have been approved by the Council and the funds have been raised will no doubt play an important role in strengthening the recovery of the European economy from the effects of the Covid-19 pandemic and its resilience in the face of future economic crises. But an important first step in that recovery was taken last March when the Commission proposed and the finance ministers agreed to activate for the first time the ‘general escape clause’ from the budgetary constraints of the Stability and Growth Pact. As important as the NGEU programs—most notably, the RRF—will be in strengthening the economies of the member states over the medium-to-long term, the recovery we see under way today is the result of a good old-fashioned fiscal stimulus.

As important as the decision to activate the ‘general escape clause’ was in enabling the member states to undertake a substantial fiscal stimulus to counter the economic contraction that occurred in the first half of 2020 and, in so doing, take the first steps on the road to recovery, there is still some distance to go. In last week’s forecast, the Commission stated that it expects the real (i.e., inflation-adjusted) GDP in both the EU and the euro area to return to pre-crisis levels—those attained in the fourth-quarter of 2019—in the last quarter of this year. But that means that, while it will by then have fully recovered from the 2020 contraction, it will not have grown beyond where it was two years earlier and will, in effect, have lost two years of growth. And last week’s forecast suggested the quarterly rates of growth next year will be substantially lower than those in the last three quarters of this year—which may explain why Commission Executive Vice President Valdis Dombrovskis said last month the Commission will continue the ‘general escape clause’ through 2022, with a view to deactivating it in 2023. The recovery is still very much a work-in-progress.

David R. Cameron is a professor emeritus of political science and the former director of the European Union Studies Program at the MacMillan Center.