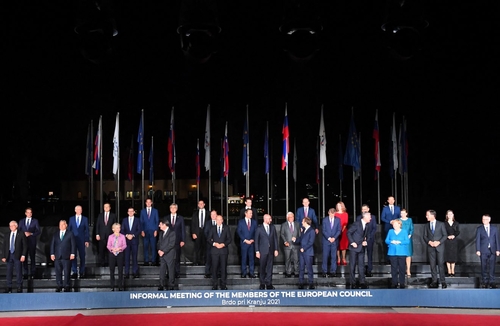 On Tuesday, the European Council, which consists of the leaders of the 27 member states of the European Union, met for an informal working dinner in Brdo pri Kranju, Slovenia to discuss the role of the EU on the international stage in light of recent developments in Afghanistan, the Indo-Pacific area, and the EU-China relationship. And yesterday, the EU leaders met with those of the six Western Balkan states that are not yet, but some day may become, members of the EU and issued the Brdo Declaration that, among other things, reaffirms the EU’s unequivocal support of the European perspective of those states and its commitment to the ongoing enlargement process involving those states.

The discussion Tuesday evening followed in the wake of the abrupt and unilateral decision by the U.S. to withdraw its troops from Afghanistan, last month’s decision by Australia to terminate a contract with a French firm to build a dozen diesel submarines and agree, instead, to a security partnership with the UK and U.S. (AUKUS) that would, among other things, provide it with nuclear submarines, and continuing tensions in the EU’s relationship with China. In his invitation letter to the EU leaders, European Council President Charles Michel said he would like them to have a “strategic discussion” on the role of the EU on the international stage in light of those developments. He noted that in the Strategic Agenda 2019-2024 the leaders agreed the EU needs to “pursue a strategic course of action and increase our capacity to act autonomously to safeguard our interests, uphold our values and way of life, and help shape the global future.” That, he said, “requires that the EU becomes more assertive and effective. Relations with strategic partners, including our transatlantic partners, and emerging powers have to be a key component of a robust foreign policy. Our objectives in these respects have not changed, but recent developments require us to reflect on how best to achieve them.”

In his remarks before the informal meeting, Michel made it clear the EU is “totally committed to the multilateral approach. We are convinced that we need strong partners, strong allies. And that’s why we consider NATO, for example, as the cornerstone for our security.” But, he said, “at the same time, we understand that it’s also important to see with colleagues how we can act in a more autonomous way in line with our partnerships and in line with our alliances.” And in his “oral conclusions” following the dinner meeting, he said, “Drawing the lessons of recent crises, we are committed to consolidating our strengths and strengthening our resilience by reducing our critical dependencies. To become more effective and assertive on the international stage, the EU needs to increase its capacity to act autonomously: as an economic power and in security and EU defence” – reiterating and endorsing again the argument for “strategic autonomy” put forward several years ago by French President Emmanuel Macron and incorporated in the Strategic Agenda. In addition, he said the leaders agreed “we will also pursue our own interests, in particular vis-à-vis China, which we consider as a competitor, a partner and a systemic rival.”  They agreed that Josep Borrell, the EU’s High Representative for Foreign Affairs and Security Policy and European Commission Vice President, who last month issued a 17-page Joint Communication to the European Parliament and the Council entitled, “The EU strategy for cooperation in the Indo-Pacific,” will put forward a first draft of the “Strategic Compass” in November, which the leaders will discuss at their meeting in December and endorse at their meeting on defence in March. In the meantime, he said, the EU will work towards a new political declaration with NATO prior to the June 2022 NATO summit and will “reduce dependencies and achieve resilience” in areas such as energy, digital, cyber security, semi-conductors, industrial policy, trade, including reinforcing the single market.

The EU’s Stabilization and Association Process, which is designed to move the Western Balkans toward candidacy, negotiation of an accession treaty, and eventual membership, has inevitably moved slowly, and the slow pace has created a substantial degree of frustration and “accession fatigue” on both sides. For many in the region, EU membership seems to have become an increasingly elusive dream. It was perhaps not surprising, then, that Slovenia, which currently holds the six-month rotating presidency of the EU and, in that capacity, currently chairs meetings of the Foreign Affairs Council, proposed at last week’s meeting of that Council that the EU commit to ensuring that all of the Western Balkan states will become EU members by 2030. The proposal was soundly rejected by the foreign ministers. But it was inevitably still on the table as the leaders gathered at Brdo.

In his invitation letter to the EU leaders, Michel said Wednesday’s summit meeting with the leaders of the Western Balkans would provide “a timely opportunity to recall the strategic importance of the Western Balkans for the Union and discuss our engagement with the region.” He indicated that, with the participation of representatives of the key economic stakeholders in the region such as the European Bank for Reconstruction and Development, the European Investment Bank, and the World Bank, the leaders would discuss the EU’s engagement to foster the region’s socio-economic recovery and sustainable development, a concern that reflects not only the adverse economic and social effects of the pandemic—the Western Balkans are not, of course, included in the EU’s €750 billion recovery plan—but also the Russian and Chinese overtures that have been made to some of those states. In a second session restricted to the EU and Western Balkans’ leaders, Michel said the leaders would discuss “how to further deepen our political dialogue, security cooperation and strategic engagement, reaffirming our shared commitment to work towards strong, stable and united Europe. This would also be an important occasion to discuss how to ensure the stability of the region, strengthen regional cooperation and resolve regional conflicts.”

At the meeting, the EU leaders, in consultation with the WB leaders, agreed on a 29-point Declaration in which the EU “reaffirms its unequivocal support for the European perspective of the Western Balkans and welcomes the commitment of the Western Balkans partners to the European perspective…and reconfirms its commitment to the enlargement process and its decisions taken thereon, based upon credible reforms by partners, fair and rigorous conditionality and the principle of own merits.” Toward that end, the EU “will further intensify our joint engagement to take forward the region’s political, economic and social transformation, while acknowledging the progress made by the Western Balkans. The EU welcomes the restated commitment of the Western Balkans partners to the primacy of democracy, fundamental rights and values and the rule of law, and to sustaining efforts in the fight against corruption and organized crime, support for good governance, human rights, gender equality and the rights of persons belonging to minorities. The credibility of these commitments depends on the meaningful implementation of necessary reforms.”

And lest anyone forget, the EU noted in the Brdo Declaration that “the EU is by far the region’s closest partner, main investor and principal donor….EU support will continue to be linked to tangible progress on the rule of law and socio-economic reforms, as well as to partners’ adherence to European values, rules and standards.” The  Declaration went on to note that the EU has provided the Western Balkans €3.3 billion thus far in pandemic-related health and socioeconomic support, including almost three million Covid vaccine doses, and will assist the Western Balkans in reaching vaccination rates similar to the EU average by the end of the year, that the Economic and Investment Plan proposed and adopted after last year’s EU-Western Balkans Summit in Zagreb will, over the next seven years, provide €9 billion in grant funding and €20 billion in investments, leveraged by the new Western Balkans Guarantee Facility, and that the Commission intends to propose an investment package of €600 million under the Instrument for Pre-Accession Assistance this year in addition to the €500 million announced in July. The Declaration also noted the EU had agreed to step up efforts to enhance the market integration of the Western Balkans with its Single Market.

But the EU made it clear there is a strategic quid for the economic quo, in addition to maintaining the primacy of democracy, fundamental rights and values and the rule of law, and continuing with socio-economic reforms. The Declaration states that “standing together with the EU is a clear sign of our partners’ strategic orientation. Therefore we re-assert our expectation that partners will further deepen cooperation in the area of Common Foreign and Security Policy (CFSP) and make tangible and sustainable progress towards full alignment with EU foreign policy positions and act accordingly, including with positions in international fora, as an important part of their European path.”

There was no commitment to accession by a particular date in the Brdo Declaration as the Slovenian presidency had proposed at last week’s meeting of the EU foreign ministers. But it is nevertheless clear, after yesterday’s summit, that, although the Western Balkans accession train is still a long way from its destination, it is at least moving – albeit slowly – in that direction.