EU-Poland dispute over courts deepens and the EU brings new infringement cases vs. Poland and Hungary 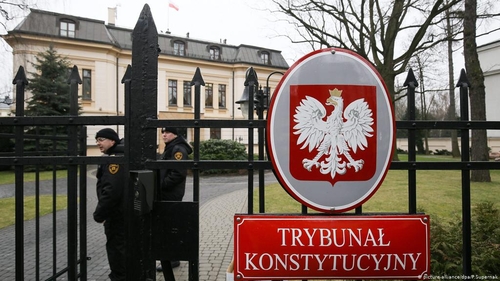 As Article 2 of the Treaty on European Union states, the rule of law is one of the fundamental principles and values upon which the EU was founded. Yesterday, the EU Commission issued its second annual report on the rule of law in the EU. The 31-page report provides a comprehensive overview of the current situation in the EU and the country-specific chapters that accompanied the report provide detailed analyses of the situation in each of the member states. For those who noted the extraordinary decision of the Polish Constitutional Tribunal last Wednesday that the European Court of Justice (ECJ) could not impose interim measures pertaining to the country’s judicial system and the Commission’s decision the next day to launch new infringement procedures against Poland and Hungary for violations of the fundamental rights of LGBTIQ people, it was not at all surprising that both countries figure prominently in the Commission’s report on the rule of law. Nor was it surprising that the country-specific chapters for Poland and Hungary are the only ones that exceed 30 pages. After all, they are the only member states for which the Article 7 Rule of Law procedure has been triggered—in regard to Poland by the Commission in December 2017, in regard to Hungary by the European Parliament in September 2018. Under that procedure, the Council must determine whether there is a clear risk of a serious breach of the values referred to in Article 2. If the Council agrees and the European Council also agrees, and does so unanimously, either or both could lose their voting rights in the Council.

Last week’s decision of the Polish Constitutional Tribunal was only the latest chapter in a long-running conflict between Poland and the EU over the country’s judicial system that began soon after the 2015 election. In that election, Law and Justice (PiS), the conservative and nationalist party headed by Jarosław Kaczyński, won 38 percent of the vote and a wafer-thin majority in the Sejm, the lower house of the parliament, that enabled it to form the country’s first one-party government since the advent of democratic politics in 1991. Headed by Beata Szydło until 2017 and then by Mateusz Morawiecki, the PiS government embarked on a number of important institutional changes involving the media, the universities, and the courts—changes that were designed to ensure its political control over those institutions.

In January 2016, the Commission opened a dialogue with the new Polish government under the EU’s Rule of Law Framework. But no discernible progress was made in bridging the wide gulf between the EU’s view of what the rule of law means and the political ambitions of the new PiS government to control the country’s courts and judges. While the rule of law dialogue was, at least in theory, still ongoing, in July 2017 the Commission launched an infringement procedure against Poland in regard to provisions in its new law on Ordinary Courts pertaining to the retirement of judges and the impact of those provisions on the independence of the judiciary. In December 2017, the Commission referred the case to the ECJ. In November 2019, the ECJ issued a final judgment in the case, confirming in full the Commission’s position. On the same day in December 2017 it referred that case to the ECJ, the Commission triggered the Article 7 Rule of  Law procedure for the first time against a member state, submitting a proposal for a decision by the Council that there was a clear risk of a serious breach in the rule of law by Poland. As noted above, a Council decision, if approved unanimously by the European Council, could result in Poland losing its voting rights in the Council.

In July 2018, the Commission launched another infringement procedure against Poland, this one in regard to provisions in its law on the Supreme Court pertaining to the retirement of judges and the impact of those provisions on the independence of the Court. In September 2018, the Commission referred the case to the ECJ. In December 2018, the ECJ issued a final order imposing interim measures to stop the implementation of the law on the Supreme Court. And in June 2019, the ECJ issued a final judgment in the case that confirmed in full the Commission’s position.

In April 2019, the Commission launched another infringement procedure against Poland, this one on the grounds that the new disciplinary regime for judges undermined their judicial independence by not protecting them from political control, as required by the ECJ. In particular, it said the disciplinary regime didn’t guarantee the independence and impartiality of the Disciplinary Chamber of the Supreme Court, which reviews decisions taken in disciplinary proceedings against judges. Among other things, the Chamber is composed entirely of new judges selected by the National Council for the Judiciary whose members—judges—are appointed by the Sejm, the lower house of the parliament. In October 2019, the Commission referred the case to the ECJ and in January 2020, it asked the ECJ to impose interim measures on Poland ordering it to suspend the functioning of the Disciplinary Chamber. In April 2020, the ECJ ruled that Poland must immediately suspend the application of the provisions pertaining to the powers of the Chamber with regard to disciplinary cases concerning judges until the ECJ rendered its final judgment in the case.

Also in April 2020, the Commission launched yet another infringement procedure against Poland in regard to a new law on the judiciary that amended a number of legislative acts governing the functioning of Poland’s judicial system on the grounds that the law, which entered into force in February 2020, undermines the judicial independence of judges, is incompatible with the primacy of EU law, prevents Polish courts from directly applying certain provisions of EU law protecting judicial independence, and prevents them from submitting references for preliminary rulings on such questions to the ECJ. The Commission gave Poland two months to reply to the letter of formal notice. Judging the response to be unsatisfactory, in October the Commission moved forward with the infringement process by sending Poland a “reasoned opinion” on the matter.

In December, the Commission sent Poland an additional letter of formal notice that added a new grievance to the case, taking issue with the continued functioning of the Disciplinary Chamber of the Supreme Court in regard to cases concerning judges. In January, after concluding that Poland’s response to the additional letter of formal notice was not satisfactory, it adopted an additional Reasoned Opinion on the matter. And in March the Commission decided to refer the case involving the new law on the judiciary that had entered into force in February 2020 to the ECJ. In addition to reiterating the shortcomings of that law, the Commission stated that Poland “violates EU law by allowing the Disciplinary Chamber of the Supreme Court—the independence of which is not guaranteed—to take decisions that have a direct impact on judges and the way they exercise their function” and asked the ECJ to order interim measures to “prevent the aggravation of serious and irreparable harm inflicted to judicial independence and the EU legal order.” Specifically, it asked the ECJ to suspend the provisions empowering the Disciplinary Chamber to decide on requests for lifting judicial immunity as well as on matters of employment, social security and retirement of judges, to suspend the effects of decisions already taken by the Chamber, and to suspend the provisions preventing Polish judges from directly applying provisions of EU law protecting judicial independence and from putting references for preliminary rulings to the ECJ.

It was in that context that Poland’s Constitutional Tribunal ruled last Wednesday, in response to an inquiry from the Disciplinary Chamber asking whether the ECJ has the power to order its suspension, that Poland does not in fact have to comply with the interim measures ordered by the ECJ. In rejecting the order of the ECJ, the Tribunal has in effect rejected the primacy of EU law. It’s not the only state that has rejected a the content of a specific ruling of the ECJ—the German Constitutional Court did that last year in regard to the Public Sector Purchase Programme of the European Central Bank—but it’s the only one that has also rejected the right of the ECJ to rule in a matter. But as one Tribunal judge put it, “With the best will to interpret the [Polish] constitution, it is impossible to find in it the powers of the [EU] Court of Justice to suspend Polish laws concerning the system of Polish courts.”

Shortly before that ruling was announced, the deputy head of the ECJ, aware of what the ECJ would be announcing the next day, again told Poland to immediately suspend all activities of the Disciplinary Chamber. The next day, last Thursday, the ECJ published its ruling that “the disciplinary regime for judges in Poland is not compatible with EU law.” The Disciplinary Chamber of the Supreme Court, it said, “does not provide all the guarantees of impartiality and independence, and in particular, is not protected from the direct or indirect influence of the Polish legislature and executive.” Characterizing the issue as a “typical dispute of doctrine,” Prime Minister Morawiecki said, “It is an obvious conclusion for any Polish citizen that the constitution is the highest legal act.” That, of course, is not the EU’s view or that of anyone familiar with the EU treaties, since EU law has primacy over national law for all of the member states. The Commission made it clear that if Poland does not address the issue there will be financial sanctions, possibly including refusal to approve Poland’s request for €23.9 billion in grants and €12.1 billion in loans to assist its recovery from the economic effects of the pandemic and ensure its resilience in the face of future economic crises.

Also last Thursday, the Commission launched infringement procedures against Poland and Hungary for the violations of the fundamental rights of LGBTIQ people. The case against Poland involves resolutions adopted since 2019 in a number of Polish municipalities and regions on the creation of so-called ‘LGBT-ideology free zones’. The Commission said it is concerned that such declarations may violate EU law regarding non-discrimination on the grounds of sexual orientation. In order to conduct a detailed analysis of the compatibility of the resolutions with EU law, the Commission said it needs adequate and comprehensive information from the Polish authorities on the resolutions and their effects, but, despite the Commission having asked for the information several months ago, the authorities have not provided it. As a result of their lack of cooperation, the Commission decided to send a formal notice that it was starting yet another infringement procedure.

The case against Hungary, which like Poland has been the subject of a number of infringement proceedings over the past decade, involves a recently-adopted law that prohibits or limits access to content that promotes or portrays the so-called ‘divergence from self-identity corresponding to sex and birth, sex change or homosexuality’ for individuals under 18. It also involves a restriction on the freedom of expression and right to non-discrimination resulting from the Hungarian Consumer Authority’s requirement that publishers of books for children presenting LGBTIQ people include a disclaimer that the book depicts forms of ‘behavior deviating from traditional gender roles’ which, the Commission said, “equates to restricting the right to freedom of expression and the right to non-discrimination.”

David R. Cameron is a professor emeritus of political science at Yale and the former director of the MacMillan Center’s Program on European Union Studies.