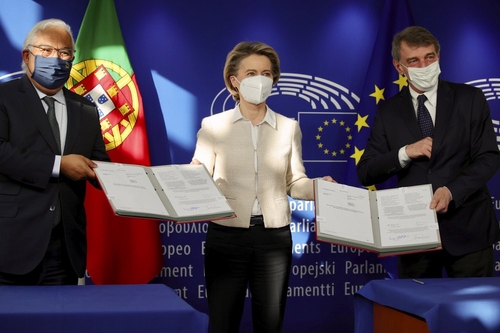 Last July, the heads of state or government of the 27 member states of the EU, meeting as the European Council, agreed on a recovery plan to assist the states in recovering from the economic effects of the Covid-19 pandemic. The plan involves the EU borrowing €750 billion (in 2018 prices) on the capital markets and then distributing €390 billion in grants and €360 billion in loans through its new Recovery and Resilience Facility to support investments and reforms essential for a sustainable recovery and resilient future. The grants and loans will be distributed on the basis of recovery and resilience plans submitted by the member states and approved by the Commission and Council. They will be distributed through the EU’s Multiannual Fiscal Framework, its seven-year budget for 2021-27, as a €750 billion add-on to the €1.074 trillion MFF approved by the Parliament and Council last year. The €750 billion will be repaid over 30 years beginning in 2028.

In order to provide the revenues necessary to fund the MFF for 2021-27 and to service the €750 billion of debt during those seven years, in December the Council of Ministers approved an Own Resources Decision (ORD). The ORD permanently increases the maximum level of resources that can be called from the member states (the “own resources ceiling”) from 1.2 percent of EU Gross National Income to 1.4 percent, and it provides for a temporary further increase in the ceiling of 0.6 percent of EU GNI to be devoted exclusively to the financing of the recovery plan. It also introduced a national contribution linked to non-recycled plastic packaging waste, the first new “own resource” created since 1988.

An ORD must be approved by all of the member states in order to take effect, At the outset, it was not at all certain that all of the member states would approve it. And indeed, it ran into trouble in Germany in late March, after the Bundestag and Bundesrat had approved it and just as the ratification legislation was about to be signed into law by President Frank-Walter Steinmeier, when the Constitutional Court intervened and blocked completion of the ratification while it considered an application for a preliminary injunction preventing ratification. After considering the application, the Court rejected it in late April, allowing Steinmeier to sign the legislation completing Germany’s ratification. But while it rejected the application, the Court expressed some doubt about the constitutionality of the ORD, saying the complaint “is not clearly unfounded” and that it would conduct a thorough examination of the issues raised by the applicants.

Another potential blockage arose in Finland, where a parliamentary committee ruled in April that the ORD must be approved by a two-thirds majority of the parliament rather than a simple majority. That meant the ORD would have to be approved by 133 of the 200 members of the parliament, creating an obvious problem for the five-party coalition government headed by Prime Minister Sanna Marin, which holds 117 seats in the parliament. However, late last month, after the government persuaded several potential opponents in one of the coalition parties not to vote against the ORD and a number of members of a center-right but pro-EU opposition party decided to vote for it, it passed—barely—with 134 votes.

The Council and Commission had aimed to complete the ratification procedure in all of the member states before summer, meaning by June 1, so the ORD could take effect and the Commission could begin the process of borrowing the funds. After Finland ratified the ORD in late April, there were still five states—Austria, Hungary, the Netherlands, Poland and Romania—that had not yet ratified it, and there was some reason to fear that one or more of the five might not do so. Given their strenuous resistance to the effort last fall to introduce some degree of rule-of-law conditionality to budgetary and recovery-related disbursements, it seemed quite possible the ORD would encounter significant opposition in Hungary and Poland. On the other hand, both governments had already signaled, implicitly, their support for the ORD by submitting recovery and resilience plans that, if approved, would provide Hungary with €7.2 billion in grants and Poland with €23.9 billion in grants and €12.1 billion in loans. And both governments have secure parliamentary majorities. In Hungary, Fidesz, the party founded and headed by Prime Minister Viktor Orbán, and its ally, the Christian Democratic People’s Party, hold 133 of the 199 seats in the National Assembly. And in Poland, although a small party in the three-party governing coalition headed by Prime Minister Mateusz Morawiecki and dominated by the Law and Justice Party had threatened to block approval of the ODR, the larger Left party agreed to support it, assuring its passage.

If the ODR were to encounter substantial opposition in any of the five states that, after Finland’s approval, still had not ratified it, that was most likely to occur in the Netherlands and/or Austria. The leaders of both countries, Prime Minister Mark Rutte and Chancellor Sebastian Kurz, were prominent members of the so-called “frugal four” that last spring and summer opposed both the scale of the recovery plan and the extent to which the funds would be distributed as grants rather than as loans. Moreover, both leaders were in difficult positions that might cause them to fall back on their domestically-popular “frugal” positions and oppose ratification of the ORD. After the March election in the Netherlands, a motion of no confidence in Rutte was proposed in the parliament after evidence was presented that he had not told the truth in denying having made a comment in post-election coalition talks about finding a position for a particular individual. He claimed he had forgotten he made the comment. The motion wasn’t approved but a subsequent motion of censure was approved. And last month in Austria, Kurz announced that he expected to be charged by prosecutors for misleading a special parliamentary committee investigating high-level corruption in his testimony regarding the appointment of a People’s Party member to OBAG, the state holding company.

Notwithstanding the ambivalence, if not outright opposition, to some aspects of the recovery plan in some of those states and the political complications in others, all five of the states that, after Finland’s approval, still had not ratified the ODR, approved it by the June 1 deadline. Romania ratified it last Friday and on Monday Austria, Hungary, the Netherlands and Poland informed the Council they had ratified it as well. On Monday, Portuguese Prime Minister and Council President António Costa—Portugal currently holds the six-month rotating presidency of the Council—announced the Council had received formal notifications from all 27 member states of their approval of the ORD and it would enter into force as of June 1, meaning the EU could begin borrowing the €750 billion in the capital markets.

Meanwhile, the Commission continues its examination of the recovery and resilience plans submitted by the member states. As of today, 23 of the 27 member states—all but Bulgaria, Estonia, Malta, and the Netherlands—have submitted recovery and resilience plans. The 23 have requested a total of €330 billion in grants and €166 billion in loans. The largest requests for grants (in billions) are those of Spain (€69.5), Italy (€68.9), France (€40.9), Germany (€25.6), Poland (€23.9), Greece (€17.8), Romania (€14.3), and Portugal (€13.9). Interestingly, but perhaps not surprisingly, while all 23 have requested grants, only seven have requested loans, and of those seven, only one—Italy—has requested a loan of more than €15 billion; Italy has requested a loan of €123 billion.

The Commission’s assessment of the plans, which is to be made on the basis of criteria spelled out in the regulation that created the Recovery and Resilience Facility and is to be completed within two months of the submission of a plan, includes, among other things, a review of the extent to which each plan addresses issues raised in country-specific recommendations issued in the EU’s annual European Semester process of reviewing the member state’s economic and fiscal policies. The Commission will also consider whether, as mandated by the regulation that created the RRF, each plan dedicates at least 37 percent of the spending for investments and reforms that will support climate objectives and at least 20 percent for investments and reforms that will foster the digital transition. After completing its assessment and submitting a proposal to the Council, the latter will have, as a rule, four weeks to approve the proposal through an implementing decision.

The Commission and Council both have a lot of work to do; most of the recovery and resilience plans are several hundred pages of dense prose filled with references to country-specific institutions and policies and accompanied with many tables and charts. Nevertheless, over the next month or two, the hundreds of pages will be distilled by the Commission into proposals that will be examined by the Council and, if approved, transformed into implementing decisions. And by mid-to-late summer, the recovery funds will finally start to flow to the member states.