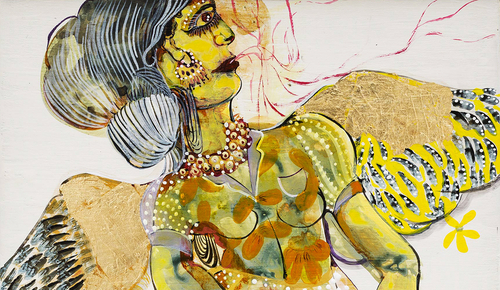 Prue, an enslaved woman, is depicted from the back. Her intricately braided hair entwines with an iron collar clasped around her neck. Spikes project from the torture device like a monster’s claws. A medicinal herb, E. foetidum, sprouts below it. Enslaved women ingested the plant to end pregnancies, intent on preventing the use of their bodies to perpetuate slavery.

Gardner’s 2009 piece is one of 17 works featured in “Art in Focus: Women From the Center,” a student-curated exhibition presented by the Yale Center for British Art (YCBA) that celebrates women artists in the museum’s collection. The show is displayed online and installed in two bays in the second-floor galleries of the museum, which is currently closed to the public.

Each year, the YCBA provides the undergraduate members of its Student Guide Program a hands-on curatorial experience.

“The program is meant to give them a sense of putting an exhibition together from beginning to end,” said Linda Friedlaender, head of education at the YCBA.

For this exhibition, five undergraduate curators received a single directive: Create a show about women in honor of the 50th anniversary of coeducation at Yale College and the 150th anniversary of women students at the university, events that the campus commemorated between September 2019 and September 2020. (The show was originally scheduled to open last spring but was delayed for a year due to the pandemic.)

The student curators began by exploring the museum’s vast collection. 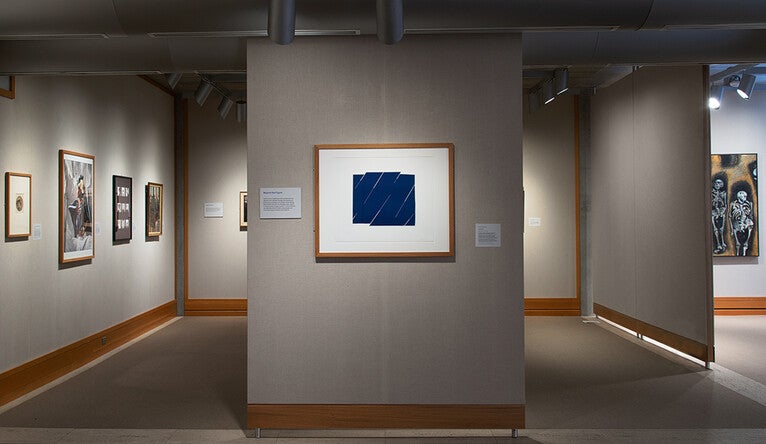 “We knew we wanted each of the objects to be created by women and to depict women or the experience of women,” said Emma Gray ’21, one of the organizers.

Gardner’s lithograph, part of a series of similar images, was one of the first works the organizers encountered. They quickly decided to include it.

“It is so visually striking at first glance, and the context behind the piece makes it even more haunting,” said Christina Robertson ’22, a member of the curatorial team. “I’m a Black female from the South, so I felt an affinity for Prue.”

The students chose works by artists from the 19th century through the present day, representing a broad range of media, styles, and techniques. They researched the artists and artwork, and developed themes for the exhibition. They divided the show into four sections: “Women and Institutions,” “Space and Place,” “Women as Muses,” and “Beyond the Figure.”

Gardner’s lithograph is grouped in “Women and Institutions” with two other works: Paula Rego’s lithograph “Jane Eyre” (2001–2002) and Carrie Mae Weems’s 2007 black-and-white photograph, “When and Where I Enter the British Museum.” Each work confronts forms of systemic oppression, such as slavery, colonialism, and sexist social conventions, the organizers said. All depict female figures with their backs turned to the viewer, a subversion of standard portraiture that, the exhibit suggests, transforms the works’ subjects into symbols of female empowerment. 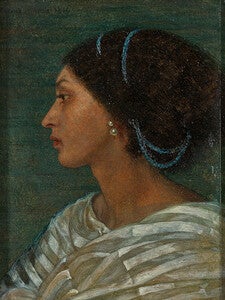 “Space and Place” highlights four works through which the artists reappropriate spaces, such as industrial landscapes, traditionally defined by men. “For Only a Short Hour,” an 1854 oil painting by Anna Blunden, depicts a young seamstress, hands folded in prayer during a break from work, gazing out a window into a smoggy sky. Factory chimneys rise from the cityscape in the distance.

The third section, “Women as Muse,” presents five works that challenge traditional notions of women as idealized and objectified sources of artistic inspiration. The woman depicted in “Fanny Eaton,” an 1861 portrait by Joanna Boyce Wells, immigrated to Great Britain from Jamaica and became a popular model for Pre-Raphaelite artists, who were mostly men. Wells emphasizes Eaton’s mixed-race features, but also captures the psychological complexity, the exhibit notes.

The small portrait normally hangs in one of the museum’s offices, explained Annie Roberts ’21, one of the student curators.

“Many of the works in the exhibit are quite large in comparison, so we were nervous that the portrait of Eaton would get swallowed,” she said. “The fact that it stood out I think speaks to power. … I find it to be quite moving when I think about how much she struggled as a woman and a Black person, and how art enabled her to both make a life for herself and live on through museums like the YCBA,” said Roberts, who is majoring in the history of art and African American studies.

“Beyond the Figure,” the closing section, examines women’s important contributions to abstract art in Britain. In “Syncopation,” a 1996 screen print, artist Kim Lim injects fluidity into her minimalist aesthetic, “which she claimed reflected the rhythms of life and the changing qualities of light,” the exhibit explains. 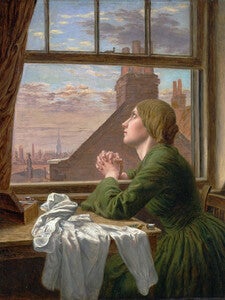 In organizing the exhibition, the undergraduates worked closely with various museum departments, including curatorial, installation, and editorial staff. They faced the daunting challenge of condensing massive amounts of information into clear, concise labels and wall text. They gained an understanding of the many agonizing choices that can accompany creating a museum exhibition.

“When I visit museums in the future, I will have a newfound appreciation for the enormity of this effort and the labored decision making that the curatorial team has made,” said Gray.

Friedlaender praised the students for their enthusiasm, creativity, and insight.

“They did an amazing job,” she said. “They found extremely interesting ways of mining the collection, putting together objects in ways that I never would have imagined.”

The curators presented the show during an online event in early March, each giving a talk about an aspect of the exhibition. They got a chance to see the exhibit in person during a recent “Yale Days” weekend at the YCBA, during which the museum’s galleries were open to people with a university ID.

It was rewarding to see people enjoy the show, Roberts said.

“All of the curatorial team cares so deeply about the issues at the heart of the exhibit — the amazing contributions of women to art and the way in which art can be a tool for deeper understanding and empathy — so it was just really cool seeing that others felt and enjoyed what we created,” she said. “It made me really excited to continue studying art history and working in museum spaces after graduation this spring.”

The curatorial team also included Sunnie Lui ’21 and Olivia Thomas ’20. In addition to Friedlaender, the students were assisted by Jennifer Reynolds-Kaye, the curator of education and academic outreach at the museum, and Rachel Stratton, a former postdoctoral research associate at Yale.

View “Women From the Center” on the YCBA website.