With the help of the Catalan Left, Sánchez wins investiture vote in Spanish Congress 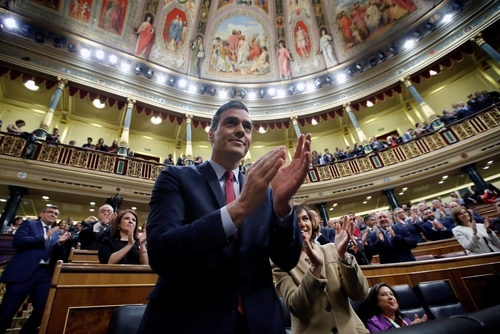 On November 10, Spanish voters went to the polls for the fourth time in the last four years and, as happened in the elections in December 2015, June 2016 and last April, no party or, for that matter, likely coalition of parties, won a majority of the 350 seats in the Congress of Deputies.  Nevertheless, two days later, the center-left Socialist Workers Party (PSOE) headed by Acting Prime Minister Pedro Sánchez and the left-of-PSOE Unidas Podemos led by Pablo Iglesias, which had attempted without success to conclude a coalition agreement after the April election, announced they had reached a preliminary agreement to form a coalition government. But actually forming a government would prove to be a daunting task; both suffered setbacks in the November election, both in terms of shares of the vote and seats in the Congress, and even if they succeeded in negotiating a formal coalition agreement, they would be well short of the absolute majority (176 deputies) required, under parliamentary rules, in the first investiture vote for a new government and would require the support or abstention of deputies representing a number of other parties in order to win a simple majority (i.e., more in favor than opposed) in a later investiture vote.

In the November election, PSOE won 28 percent of the vote and 120 seats, compared with 28.7 percent of the vote and 123 seats in last April’s election. Podemos won 12.8 percent of the vote and 35 seats, compared with 14.3 percent of the vote and 42 seats last April. With a total of 155 seats in the 350-seat Congress and no realistic prospect of winning support from any of the 89 deputies belonging to the center-right Popular Party (PP), the 52 deputies belonging to the far-right and xenophobic Vox, and the 10 deputies of the center-right Citizens party, it quickly became apparent that, as one commentator put it, the road to power for the Spanish Left inevitably and unavoidably went through Catalonia: It was a foregone conclusion that PSOE and Podemos couldn’t win the absolute majority required on the first investiture vote and that, in order to win a simple majority in a later vote, they would have to obtain, if not the support at least the abstention, of the 13 deputies of the Republican Left of Catalonia (Esquerra Republicana de Catalunya, ERC). And that would of course mean that, in addition to agreeing among themselves on a program — something they were unable to do after last April’s election — they would also have to address the concerns of the ERC in regard to the current situation and future of Catalonia. And they would have to do that despite the fact that the ERC’s leader, Oriol Junqueras, who had been the vice president of the Catalan government that called the independence referendum and subsequently declared Catalonia’s independence in 2017, had been convicted of sedition and misuse of public funds and sentenced in October to 13 years in prison for his role in organizing and conducting the referendum and the subsequent declaration.

After last April’s election, PSOE and Podemos had tried to negotiate a coalition agreement that might enable them to govern if, after failing to obtain an absolute majority among the 350 deputies in the first investiture vote, they were able to win a subsequent investiture vote when the hurdle would be lowered to a simple majority. But the negotiations dragged on for months and the parties ultimately were unable to reach an agreement on portfolios and policy. Podemos wanted to be an equal partner with PSOE in a coalition government — one in which it would hold some ministries and in which the government would be committed to an agreed policy agenda. PSOE, on the other hand, wanted to govern alone, with Podemos simply providing support for PSOE’s program in the Congress. By early September, it had become apparent the parties couldn’t and wouldn’t reach an agreement and a new election was called for Nov. 10.

Given that recent history, it was perhaps surprising then that, less than 48 hours after the November election, Sánchez and Iglesias announced that PSOE and Podemos had reached a preliminary agreement to form a coalition government. That they were able to draft and sign such an agreement only days after the election reflected, in large part, PSOE’s acceptance that if it were to form a government with Podemos it would have to not only accept a more radical set of programmatic objectives than it might otherwise have preferred but would also have to share power, including ministries, with that party. But with those issues resolved – PSOE would endorse some elements of the Podemos program, Iglesias would serve as Deputy Prime Minister and Podemos would hold several ministries – the negotiation resumed where it had ended last summer and in late December the parties announced an agreement in regard to the policies they would pursue if voted into office.

Not surprisingly, given their positions on economic and social issues and the parties they would have to court in order to win a simple majority in the Congress, PSOE and Podemos agreed on an unambiguously progressive program — one that includes, among other things, increasing the marginal tax rate on those with high incomes, increasing the rate of taxation of capital gains, establishing a new minimum corporate tax rate and a higher minimum rate on banks and energy firms, eliminating the law passed by the previous center-right government that allows companies to fire workers who take official sick leave, introducing new legislation to protect workers in short-term and temporary positions, substantially increasing the minimum wage and pensions, and stepping up efforts to reduce the rates of overall unemployment, youth unemployment and female unemployment, all of which are substantially higher than the rates in all of the other EU member states except Greece.

One of the issues that had divided PSOE and Podemos in the previous negotiation involved their proposed response to the continuing crisis over Catalonia. Podemos had argued that Catalonia should have the right to hold a referendum on independence and called for approval of another referendum like the one held in October 2017 despite the Supreme Court’s ruling that it violated the Constitution. PSOE, on the other hand, had opposed another referendum and took a tougher line against those supporting independence. Sánchez indeed had approved Madrid’s use of its Article 155 powers to dismiss the Catalan government, take over control, and hold new regional elections after Catalonia declared its independence after the 2017 referendum, and he accepted the view that a referendum on independence would, as the Supreme Court had ruled, violate the Constitution.

In their negotiation after the November election, PSOE and Podemos papered over their earlier differences with respect to Catalonia in the preliminary agreement, saying they would discuss “formulas for mutual understanding and common ground” and would seek a solution to the crisis “within the bounds of the Constitution.” But the more challenging issue was how to persuade the ERC to abstain rather than vote against a PSOE-Podemos government in a second investiture vote.

Soon after the election, the ERC conducted a survey of its members in which they were asked whether they agreed to “reject Pedro Sánchez’s investiture unless there is previously an agreement to tackle the political conflict with the state at a negotiating table.” After 95 percent of the members said they agreed, the ERC began talks with PSOE, making it clear that its abstention on a second investiture vote would depend on the parties reaching an agreement to hold talks without limits that would include, among other subjects, a future vote on independence and an amnesty for its jailed leaders. The ERC made it clear, as well, that there would have to be an equal number of negotiators for each party at the table, that there would be at least one meeting in Barcelona, and that Sanchez would use the term “political crisis” in discussing the situation in Catalonia.

The talks between PSOE and the ERC went on throughout much of November and December – and were further complicated when the European Court of Justice concluded on Dec. 19 that Junqueras, who had appealed that he had not been allowed to leave prison to be sworn in as a member of the European Parliament, had become a member of the European Parliament immediately upon his election as an MEP in May and that, as such, he enjoyed parliamentary immunity from that moment on. After the Spanish Supreme Court asked the Solicitor General’s office for its view in regard to the ECJ decision, that office advised the Court to release Junqueras so he could travel, with an escort, to Brussels to be sworn in as an MEP, after which he would be returned to prison. That office also urged that Spain request the European Parliament to suspend his immunity. The Supreme Court’s decision is pending.

Last Thursday, two days before the investiture debate was scheduled to begin, the ERC announced that, after reviewing the text of the agreement negotiated with PSOE, its National Council had voted by an overwhelming majority to abstain in the investiture vote. The agreement stipulates that a forum consisting of representatives of the national government and the government of Catalonia will be constituted within two weeks of the formation of the new government, that there will be no restrictions in regard to the content of the discussions in the forum, that both parties recognize that the situation in Catalonia is a “political conflict,” that the only restriction in terms of whatever agreement might be reached is that it must comply with the “framework of the legal-political system,” and that whatever agreement is reached will be subject to a vote by the citizens of Catalonia.

With the ERC’s abstention assured, the two-day investiture debate on the proposed PSOE-Podemos government began on Saturday and concluded on Sunday with a vote in which an absolute majority of the 350 deputies — 176 — was required for approval. As expected, Sánchez lost the vote; 166 deputies voted in favor of the proposed government including, in addition to the PSOE and Podemos deputies, the six deputies of the Basque Nationalist Party (PNV), and those of several other regionally-concentrated parties — Más País (More Country, founded by one of the co-founders of Podemos), Compromís, Nueva Canarias, the Galician Nationalist Bloc (BNG) and Teruel Existe. 165 deputies, including those representing the Popular Party (PP), Vox, Citizens, Together for Catalonia-Together (JxCat-Junts) and four smaller parties voted against the proposed government. The 13 deputies of the ERC and the five representing EH Bildu, the left-wing Basque Country Unite, abstained.

Yesterday, the investiture debate resumed and concluded with another vote, this one requiring only a simple majority of those voting in order to approve the proposed government. The Congress approved the proposed PSOE-Podemos government by a vote of 167 to 165, with the same parties supporting or opposing the proposed government that had supported or opposed it in Sunday’s vote. (The only difference was that one very ill PSOE member who had not attended the earlier debate voted yesterday.) As in Sunday’s vote, the 13 ERC deputies and five EH Bildu deputies abstained. As a result, Spain now finally has a government. But it is not only a coalition government but a minority coalition government; how long it will remain in office and to what extent it will be able to follow through on the substantial commitments made by PSOE and Podemos to each other in regard to social and economic policy, and by PSOE to the ERC in regard to Catalonia, remains to be seen.