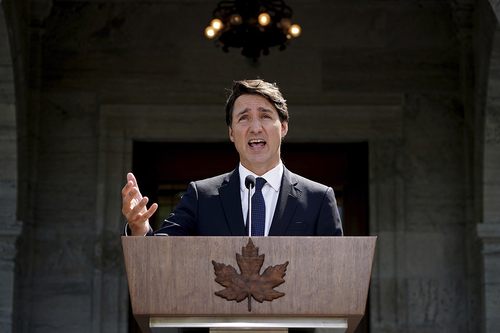 Hoping to win a Liberal majority in the House of Commons, on August 15 Canadian Prime Minister Justin Trudeau asked the Governor General, Mary Simon, to dissolve Parliament and call a new election on September 20. Trudeau, whose father Pierre Elliott Trudeau served as prime minister from 1968 to 1979 and 1980 to 1984, has led the Liberals since 2013 and became prime minister after the Liberals won a majority in the October 2015 election. In the October 2019 election, the Liberals lost their majority and since then Trudeau has headed a minority government with the occasional support on critical issues of the New Democratic Party, a uniquely-Canadian social democratic party.

In 2015, Trudeau and the Liberals won in a landslide over the Conservatives led by Prime Minister Stephen Harper. The Liberals won 39.5 percent of the aggregate vote in the 338 ridings, a gain of 20.6 percentage points over their vote in 2011, and their candidates won 184 of the 338 ridings, an increase of 148 seats in the House of Commons. That increase in seats was the largest ever recorded in a Canadian election and gave the Liberals and Trudeau a substantial majority in the House. The Liberals won 80 ridings in Ontario compared with 11 in 2011, 40 in Quebec compared with seven in 2011, 17 in British Columbia compared with two in 2011, 11 in Nova Scotia compared with four in 2011, 10 in New Brunswick compared with one in 2011, and seven in Manitoba compared with one in 2011. They even won four ridings in Harper’s Alberta. It was, by any measure, a truly historic landslide. The Conservatives won 31.9 percent of the vote, a drop of 7.7 percentage points, and 99 seats, 60 less than they had at the dissolution of the House. The NDP also suffered a major defeat, with their share of the vote dropping from 30.6 percent to 19.7 percent and their seats in the House dropping from 95 to 44. The Bloc Québécois suffered a slight drop in its vote, from 6.1 percent in 2011 to 4.7 percent (19.3 percent in Quebec), but won 10 of the 78 ridings in the province, a gain of 8.

Two important developments in recent months are likely to work to the advantage of the Liberals in the upcoming election. For one thing, and undoubtedly most importantly, after a slow start Canada has done a better job of vaccinating its citizens than almost every other developed country. As of yesterday, Our World in Data reports that 65.6 percent of the Canadian population is fully vaccinated. That compares with 61.4 percent in the UK, 58.3 percent in Germany, 55.6 percent in the European Union as a whole, 54.5 percent in France, and 51.1 percent in the U.S. Largely resulting from that success, and fueled by a large federal deficit equivalent to 11 percent of GDP last year and 8 percent this year, Canada is experiencing a strong rebound in the economy this year; the OECD predicts that, thanks to the fiscal stimulus, the decrease in Covid-related restrictions on economic activity, and strong external demand,  GDP will increase by 6.1 percent this year and an additional 3 percent next year,

There’s still almost a month of campaigning left before September 20 and it’s quite possible the results reported that evening will demonstrate the country’s collective gratitude for the government’s success in getting the Covid vaccine into the arms of so many Canadians and aggressively deploying fiscal policy to fuel the recovery of the economy from the adverse effects of the pandemic. Nevertheless, at this early point in the campaign, it appears the Liberals, while picking up a few seats, may again fall short of a majority. Recent polls indicate they will get 32-34 percent of the aggregate vote in the 338 ridings, roughly the same as the 33.1 percent they won in 2019. One estimate based on the tracking polls suggests they’ll win 161 seats, a gain of four over the 157 they won in 2019 but still 9 short of the 170 required for a majority. The polls suggest the Conservatives, who are now led by Erin O’Toole, will get 31-32 percent of the vote, a drop from the 34.3 percent they won in 2019, and may win 111 seats, ten less than they won in 2019. The polls also suggest that, if there is any winner in the election, it could be the NDP, drawing on the charisma of Singh and the party’s advocacy of progressive positions in regard to such issues as climate change, health care, housing, and alleviating poverty and inequality. The NDP is on track to win 18-20 percent of the vote, compared with the 16 percent NDP candidates received in 2019, and pick up eight seats in addition to the 24 they won in 2019. The polls also suggest the BQ will get a bit over 6 percent of the vote—in 2019, it won 7.6 percent—and may lose several of the 32 seats in won two years ago. And surprisingly, given the salience of the climate issue, heightened by this summer’s heatwaves, fires in British Columbia and drought in the Prairies, the polls suggest the Greens will get only 4-5 percent of the vote, a drop from the 6.6 percent they won in 2019, and may retain only one of the three seats they won in 2019.

Will Trudeau and the Liberals win a majority in the House of Commons? It’s early days in the election campaign and the preferences of some voters may change over the course of the campaign in enough ridings to give them a majority. But at this point, the best guess is they won’t win a majority and Canada will again have, as it has for the past two years, a Liberal minority government headed by Justin Trudeau—one that relies, as the government did over the past two years, on the support of the NDP in critical votes.

David R. Cameron is a former member of the MacMillan Center’s Canadian Studies Committee. With Richard Albert, a former Canadian Bicentennial Visiting Professor at the Center, he co-edited Canada in the World: Comparative Perspectives on the Canadian Constitution (Cambridge, 2017).