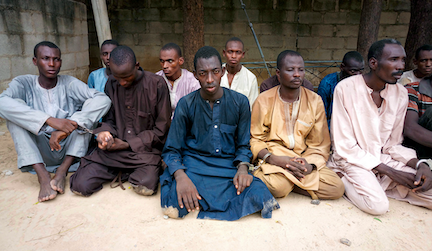 Messages from trusted religious authorities can persuade people to reintegrate former Boko Haram fighters into the Nigerian communities terrorized by the violent extremist group for more than a decade, according to a new study co-authored by Yale political scientist Elizabeth Nugent.

The study, published in Proceedings of the National Academy of Sciences, found that radio messages delivered by a highly regarded religious leader promoting the forgiveness of repentant ex-Boko Haram fighters made people more willing to accept the former extremists back home and to believe that their neighbors also support reintegration.

The results suggest a possible low-cost and effective method for changing people’s minds about reintegrating former fighters, which could help to end a conflict that has claimed tens of thousands of lives, subjected hundreds of school-aged girls to kidnappings, and displaced millions of people, Nugent said.

“Reintegrating ex-fighters will be crucial to ending the conflict in northern Nigeria and healing the divisions that drove years of shocking violence,” said Nugent, assistant professor of political science in Yale’s Faculty of Arts and Sciences. “Our work demonstrates that when religious leaders engage with their community in a positive way, it can have a substantial impact on changing minds and shifting norms in a way that promotes peace and reconciliation.”

The study is particularly timely given that thousands of Boko Haram fighters have surrendered to the Nigerian military since May, when the group’s leader, Abubakar Shekau, killed himself with a bomb blast to escape capture by a rival extremist faction.

Nugent and the study’s other lead authors — Graeme Blair of the University of California-Los Angeles, Rebecca Littman of the University of Illinois Chicago, and Rebecca Wolfe of the University of Chicago — partnered with the global humanitarian and development organization Mercy Corps to design and conduct an experiment in Maiduguri, Nigeria, the birthplace of Boko Haram. In the experiment, 1,452 adult Muslim residents underwent a detailed informed consent procedure in which they were assigned to listen to either a treatment radio message from a religious leader or a placebo message unrelated to the conflict with Boko Haram.

The researchers developed the treatment message in collaboration with a senior Islamic sheikh, who recorded it in Hausa and Kanuri, the city’s most common languages. The message emphasized the importance of forgiveness in religious texts, announced the sheikh would forgive repentant former Boko Haram members, and encouraged his followers to do the same.

At the start of the experiment, participants in the treatment group were asked a series of questions about their demographics, mental health, and experiences with Boko Haram. Frightening interactions with the terrorist group were extremely common: 26% of participants witnessed Boko Haram kill someone, 14% were personally beaten or tortured, and 67% had a relative killed by the group.

After the preliminary survey, participants gathered with family and neighbors to listen to the radio message. Next, they were presented a vignette about a hypothetical ex-Boko Haram fighter. Participants answered a series of questions gauging their attitudes and intended behavior toward the ex-fighter, including whether he should be welcomed home, and if they would trade with him, invite him to events, or engage in other forms of interaction. They were also asked for their perceptions of social norms around the willingness of their neighbors and religious and other community leaders to accept the former fighter.

The study showed that the religious leader’s message significantly increased support for reintegration and willingness to interact with ex-Boko Haram fighters. For example, 60% of respondents in the placebo group said that they thought former fighters should be reintegrated into the community. This number increased by 10 percentage points among those who listened to the religious message. The willingness to interact with the ex-fighter — trade or meet with him, vote for him, invite him to weddings, etc.— was nine percentage points higher among the treatment group versus the placebo group across the survey categories measuring behavioral intentions, according to the study.

The study found that participants who listened to the sheikh’s message reported thinking that their neighbors and community and religious leaders are more supportive of reintegration versus those in the placebo group, with effects ranging from 6 to 10 percentage points across survey questions.

“The people who heard the religious leader’s radio message were more willing across the board to welcome back ex-Boko Haram members and interact with them in social, political, and economic life,” Nugent said. “This is encouraging because instability and violence could quickly reemerge if even just a small number of ex-members are reluctant to reintegrate out of fears that they’ll be shunned or persecuted.”

The study’s other co-authors are Mohammed Bukar of Mobukar Research Consultancy Services, Benjamin Crisman of Princeton University, Anthony Etim of Mercy Corps, and Chad Hazlett and Jiyoung Kim of UCLA.